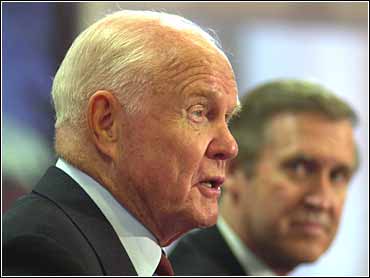 Former astronaut and senator John Glenn says it is hard to accept that beginning next year, for the first time since the dawn of the Space Age, the United States will have no way to launch astronauts into space on its own. He released a nine-page paper today laying out his adamant opposition to plans to retire the nation's shuttle fleet, which have been in place since 2004.

"Why terminate a perfectly good system that has been made more safe and reliable through its many years of development?" Glenn asked.

NASA's last shuttle launch is scheduled for this fall. After that, American astronauts will rely on Russian spacecraft to travel to the International Space Station while the space program works on a new heavy-lift rocket, which could take five to 10 years.

Glenn writes that the cost of traveling in Russian spacecraft, at $55.8 million per astronaut, will not save the space program much money. Furthermore, he says, it will discourage research at the space station and dampen its effectiveness as a symbol of U.S. technical expertise and as a source of inspiration. It could also put the space station at risk if Russian spacecraft were to fail.

The 88-year-old Glenn was the first American to orbit the Earth in 1962 and served as a Democratic senator representing Ohio from 1975 to 1999. He is not the only astronaut to weigh in recently on the future of the space program. Neil Armstrong, the first man to walk on the moon, and Buzz Aldrin, the second man to stand on the moon, are at odds over President Obama's plans to cancel Constellation, the program to send astronauts back to the moon.

While Mr. Obama's decision to cancel Constellation was part of his new vision for NASA, plans to retire the shuttle fleet have been in place since the Bush administration.

Some lawmakers also oppose canceling Constellation in part because of the potential job losses canceling the program could create, even though the administration says its plan for NASA is a net job creator. NASA announced today that Mr. Obama on Friday submitted a 2011 budget amendment that targets up to $100 million toward spurring regional economic growth and job creation in the aerospace industry, with funding made available from the closure of the Constellation program.

"Relying solely on the Russians for access to space is irresponsible," LeMieux said. "President Obama's ill-conceived plans for NASA will cost Florida thousands of jobs while dismantling a critical workforce and national capability."