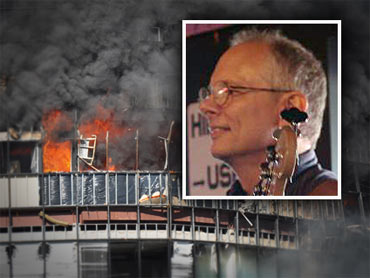 (CBS/AP)
AUSTIN, Texas (CBS/AP) The alleged suicide attack by pilot Joseph Andrew Stack on an Internal Revenue Service office Thursday was an act of a lone wolf, according to the Austin police chief.

Chief Art Acevedo confirmed that the 53-year-old software engineer acted alone when he crashed his small plane into an Austin office building containing nearly 200 IRS employees, setting off a raging fire that sent workers fleeing for their lives.

Acevedo said there were "some heroic actions on the part of federal employees" as the event unfolded. "I am sure those stories will be told at the appropriate time."

A federal law official said investigators were looking at a long anti-government screed and farewell note that he apparently posted on the Web earlier in the day as an explanation for what he was about to do.

In it, the author cited run-ins he had with the IRS and ranted about the tax agency, government bailouts and corporate America's "thugs and plunderers."

"I have had all I can stand," he wrote in the note, dated Thursday, adding: "I choose not to keep looking over my shoulder at `big brother' while he strips my carcass."

Acevedo said that Stack's body has not been recovered yet.