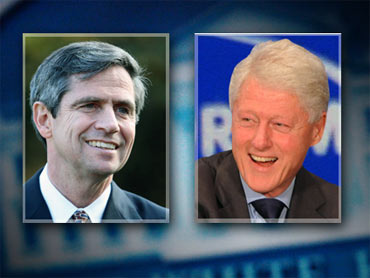 Former President Bill Clinton talked to Rep. Joe Sestak last summer about dropping out of the Pennsylvania Senate primary against Sen. Arlen Specter and taking an advisory job in the executive branch.

But the White House denies that it acted improperly when it asked Mr. Clinton to talk to Sestak about dropping his ultimately successful challenge to Specter, the Republican-turned-Democrat whose defection gave Democrats a filibuster-proof majority in the Senate.

"We have concluded that allegations of improper conduct rest on factual errors and lack a basis in the law," White House counsel Robert Bauer wrote in a memo today.

Bauer wrote that while "options for Executive Branch service were raised" with Sestak in an effort to "avoid a divisive Senate primary," the executive branch advisory board positions discussed were uncompensated and would have allowed Sestak to remain in the House. In addition, he wrote, White House staff did not discuss the matter with Sestak; rather, White House chief of staff Rahm Emanuel reached out to Mr. Clinton to serve as an intermediary.

Bauer wrote there was nothing improper in the process.

"The Democratic Party leadership had a legitimate interest in averting a divisive primary fight and a similarly legitimate concern about the Congressman vacating his seat in the House," he writes. "By virtue of his career in public service, including distinguished military service, Congressman Sestak was viewed to be highly qualified to hold a range of advisory positions in which he could, while holding his House seat, have additional responsibilities of considerable potential interest to him and value to the Executive Branch."

"There have been numerous, reported instances in the past when prior Administrations -- both Democratic and Republican, and motivated by the same goals -- discussed alternative paths to service for qualified individuals also considering campaigns for public office," he continued. "Such discussions are full consistent with the relevant law and ethical requirements."

The memo did not placate Republican critics.

"This is a punishable by prison. This is a felony," California Rep. Darrell Issa told reporters this morning. "This is exactly what President Obama campaigned against."

Bauer also hit back at speculation that Sestak had been offered the position of Secretary of the Navy, flatly deeming it "false." He wrote that the president announced his plans to nominate Ray Mabus to the position on March 26th of last year, more than a month before Specter switched parties.

Sestak put out a statement confirming the White House account.

"Last summer, I received a phone call from President Clinton. During the course of the conversation, he expressed concern over my prospects if I were to enter the Democratic primary for U.S. Senate and the value of having me stay in the House of Representatives because of my military background," Sestak said. "He said that White House Chief of Staff Rahm Emanuel had spoken with him about my being on a Presidential Board while remaining in the House of Representatives. I said no."

"I told President Clinton that my only consideration in getting into the Senate race or not was whether it was the right thing to do for Pennsylvania working families and not any offer," he continued. "The former President said he knew I'd say that, and the conversation moved on to other subjects."

At a press conference yesterday, President Obama insisted that "nothing improper took place" in conversations between the White House and Sestak. Sestak, meanwhile, told reporters that White House officials were in contact with his brother and campaign director, Richard Sestak, about what "was going to occur."

In February, Sestak said in an interview that he was offered a high-ranking administration job in exchange for dropping his primary bid. He subsequently declined to elaborate, saying that doing so would be just getting into politics.

Led by Rep. Issa, the top Republican House Oversight and Government Reform Committee, Republicans pounced on Sestak's allegation. Issa called for a special prosecutor to investigate the matter in April and was rebuffed by the Justice Department. The potential scandal grew after Sestak defeated Specter, with more Republicans calling for a special prosecutor and reporters pressing the White House to address the issue.

Issa suggests conversations between the administration and Sestak violated anti-bribery provisions of the federal criminal code as well as prohibitions on government officials interfering in elections and using federal jobs for a political purpose. Violation of each provision is punishable by up to one year in jail.

"The White House has admitted today to coordinating an arrangement that would represent an illegal quid-pro-quo as federal law prohibits directly or indirectly offering any position or appointment, paid or unpaid, in exchange for favors connected with an election," he said in a statement.

"It's not the kind of thing anybody likes to talk about, but it does go on," former Reagan Justice Department official Michael Carvin told CBS News Chief Legal Correspondent Jan Crawford. But Carvin said the discussions may have amounted to a technical violation of the law: "it does fall within the literal language of the statute," he said.