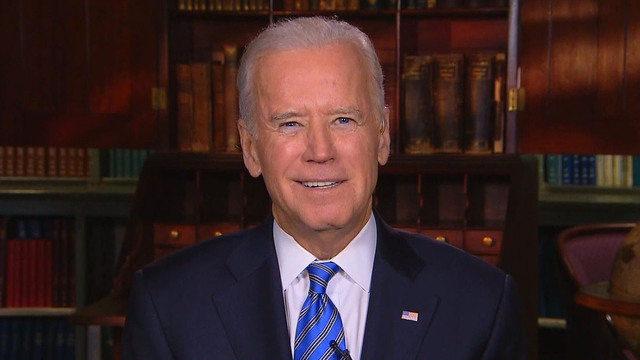 In his usual cheeky manner, Vice President Joe Biden weighed in Wednesday on the storm of controversy surrounding allegations that the New England Patriots deflated their footballs during a recent championship game.

"I tell you what, having been a receiver, I like a softer ball," Biden told CBS This Morning. "That's all I can tell you."

ESPN reported on Tuesday that the National Football League found 11 of the 12 balls the Patriots used during the AFC championship game against the Indianapolis Colts on Sunday had been partially deflated.

According to NFL.com, the league's rule book states game balls must be inflated with between 12.5-13.5 pounds of air. Each team must provide 12 primary balls for testing prior to the game.

Using ball that is deflated or altered in any way is against the league's regulations because it could confer a competitive advantage - balls under the prescribed weight are considered easier to throw and catch.

The Patriots have denied any wrongdoing, and the NFL has declined to comment on the matter while its investigation is ongoing.

The vice president also discussed the recent gunfire near his home in Delaware, saying he's "not worried" about his safety after several gunshots were fired near his home on Saturday evening, although it's evident he has given the incident some thought.

"First of all, my house is way off the road," Biden said. "Secondly, there's no evidence it was shot at the house. They found shell casings over 100 yard length of time, four shells, so a car must have been going by at a fairly high rate of speed. It appears someone on the passenger side fired a gun. And my house is on the driver's side. It's about 100 yards away....There's no evidence of anything hitting the house. I'm not at all worried."

CBS This Morning co-host Gayle King asked, "So you don't think anybody's trying to get you?"

Much of the interview with the vice president focused on President Obama's State of the Union address on Tuesday evening. Biden said the president and his administration are focused on giving the middle class a "better deal" in their final years in office, and he urged Republicans to come to the bargaining table.