10.2% — that's the most important number from the October Employment Report. For the first time since 1983, the over 1 out of every 10 American is out of work. How's that for starting your Friday with some sobering news? 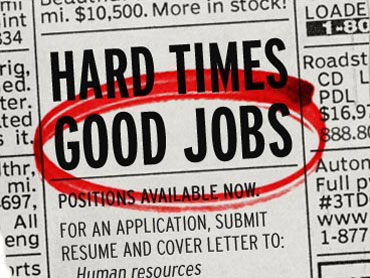 (CBS/iStockphoto)
The 190,000 jobs lost in October means that since the start of the recession in December, 2007, 8.2 million people have lost their jobs and the unemployment rate has grown by 5.3%. The numbers in and of themselves would by bad enough, but they don't accurately reflect just how hard it is to find a job. For that, you need to drill down to the U-6 measure of employment, or as my friend the economist likes to say, "the true pain threshold." U-6 starts with the total number of unemployed and adds part time employees and those who are "marginally attached," which means all of those folks people who took crappy jobs that are beneath their skill levels. The U-6 was 17.5% last month.

After digging deeper into the numbers, I was able to find a tiny bit of positive data - the number of temporary workers rose by 34,000, which was the first gain since 12/07. The addition of temps and increase of overtime hours are the first measures that will likely get us out of this horrible job situation. One other bit of solace is that the average work week didn't decline further, but remained at a record low of 33 hours. Yeeesh ... cold comfort, huh?

Adding in the rest of the week's news on employment, here's what we know:
New Job loss is tapering off: Weekly initial claims for jobless benefits fell last week to the lowest level since January 3rd and ADP reportedthat the number of private sector jobs lost has fallen for seven straight months.

Productivity gains are a Job seeker's loss: One reason that employers don't need to hire new people, is that they're getting more out of the workers they have. The Labor Department reported that Q3 productivity grew by 9.5% annual rate, the fastest pace in six years. Employers didn't have to pay up to squeeze more out of employees. Labor costs fell at a 5.2% annual rate, capping the biggest 12-month drop since 1948.

Where does that leave us? If you don't have a job, the news confirms what you know. If you have a job, you're still worried you could lose it. In other words, we are mired in a grinding and painful period, which is like to persist for months to come.

More on MoneyWatch:
•Winners and Losers: Whose Recovery Is This?
•For Big Stores, Slump Continues
•Warren Buffett's Best Quotes
•Calculate: How Long Will You Live?
•8 Rules: Turn $11,558 into $84 Million
•Asset Allocation Funds: 6 Picks
•Best Credit Cards for You