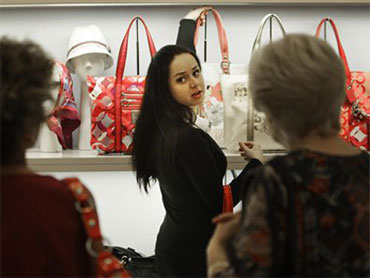 Ninety percent of the work force has a job, the same as a year ago. But last year, people were still worried about getting laid off. Today, they aren't.

Consumer spending is critical because it powers about 70 percent of the economy. It's risen without interruption since July, and it powered the strongest holiday shopping season since 2006. Many shoppers are showing enough confidence to splurge on new cars: Auto sales rebounded 11 percent in 2010, the first increase since 2005.

"The strongest showing for consumers since the peak years of the last expansion signals that the broader economy is near a threshold of self-sustaining growth," analysts at Citi Investment Research & Analysis wrote last week.

Federal Reserve Chairman Ben Bernanke echoed that point Friday. He told a Senate panel he sees evidence that a "self-sustaining" recovery is taking hold because consumers and businesses are spending more.

Morgan Stanley economists say 4 percent growth is "likely, perhaps even conservative" in 2011, up from an estimated 3.1 percent last year. Late this month, the government will estimate economic growth for the final quarter of 2010.

Consumer spending is rising because the vast majority of working-age Americans are now breathing easier, despite 9.4 percent unemployment. People who had jobs feared being laid off during the recession, which ended in June 2009, and for months after. Fewer worry now, because most companies have stopped cutting staff.

Workers who survived the job cuts of the past three years have begun to conclude: "If they haven't fired me by now, they're not going to," says Michael Koskuba, portfolio manager with Victory Capital Management.

The number of people applying for unemployment benefits a proxy for the pace of layoffs plunged about 15 percent in the final four months of 2010. Only six other times since 1967 have applications dropped that steeply in any four-month period, according to Goldman Sachs economists. And economists think employers will finally ramp up hiring this year.

"You've got 10 percent unemployment, and you add another 5 or 10 percent" for discouraged workers or those stuck in part-time positions, because they can't find full-time work, says Doug Hart, a retail specialist at the consulting firm BDO USA. But the remaining 80 percent, having survived layoffs, "are feeling more secure about their jobs."

That's evident among consumers like Monique Aguilar, 27, of Saugus, Mass. Aguilar put off a car purchase last year after the restaurant chain where she's a manager announced layoffs. But there she was Friday at a Chevrolet dealership in neighboring Lynn, Mass., shopping for a new Malibu.

What's changed? She doesn't worry so much about being let go. Her employer's sales have improved, and she's encouraged by reports of slowing layoffs and more hiring.

"In general, I feel like we're going in the right direction," Aguilar says. "That makes me comfortable in my purchase."

Economists say consumers seem increasingly divided into "haves" and "have-nots." The haves feel secure in their jobs. Their finances are solid. So is their credit. They dominate the highest-earning 20 percent of Americans, who contribute nearly 40 percent of consumer spending.

The have-nots are struggling with shaky finances and job security. Unemployment is at 12 percent for transportation workers, for example. It exceeds 20 percent for construction workers.

A 20 percent run-up in the Dow Jones industrial average since July has also skewed the consumer rebound in favor of upper-income shoppers and the luxury stores that serve them.

"It's a two-tier market," says Doug Roberts, chief investment strategist for Channel Capital Research. The affluent "are beginning to feel more confident because their (stock) portfolios are up."

During the holidays, high-end retailers like Nordstrom Inc. and Saks Inc. reported the strongest sales. Michael Niemira, chief economist at the International Council of Shopping Centers, says luxury sales rise and fall almost in lockstep with the stock market.

After hunkering down during the recession, for example, Jerrie McKennon of Burleson, Texas, last year splurged on a Lexus and two expensive vacations. The main reason was that most of her investment portfolio had recovered from its losses.

Few expect a return to the carefree spending of the mid-2000s. Falling home prices are weighing on consumers' confidence and their ability to borrow. Nearly one in four homeowners owe more on their mortgage than their homes are worth. Rising gasoline prices and the prospect of higher food prices are also likely to limit spending.

But analysts at Barclays Capital say a cut in Social Security taxes for workers this year will help them absorb higher gasoline prices. That tax break will put more money in people's pockets $1,000 more for someone earning $50,000 a year.

That doesn't mean the unemployment rate will fall significantly this year. Most economists think it will remain around 9 percent at year's end. Bernanke said Friday it could take up to five years for unemployment to drop to a historically normal rate of around 6 percent.

Still, economists say, more consumers are confident the worst of the job cuts are over. And that points to a stronger economy ahead.

"If you think back to a year ago, we were still questioning whether we'd seen the end of the recession," Niemira says. "So we've come a long way."