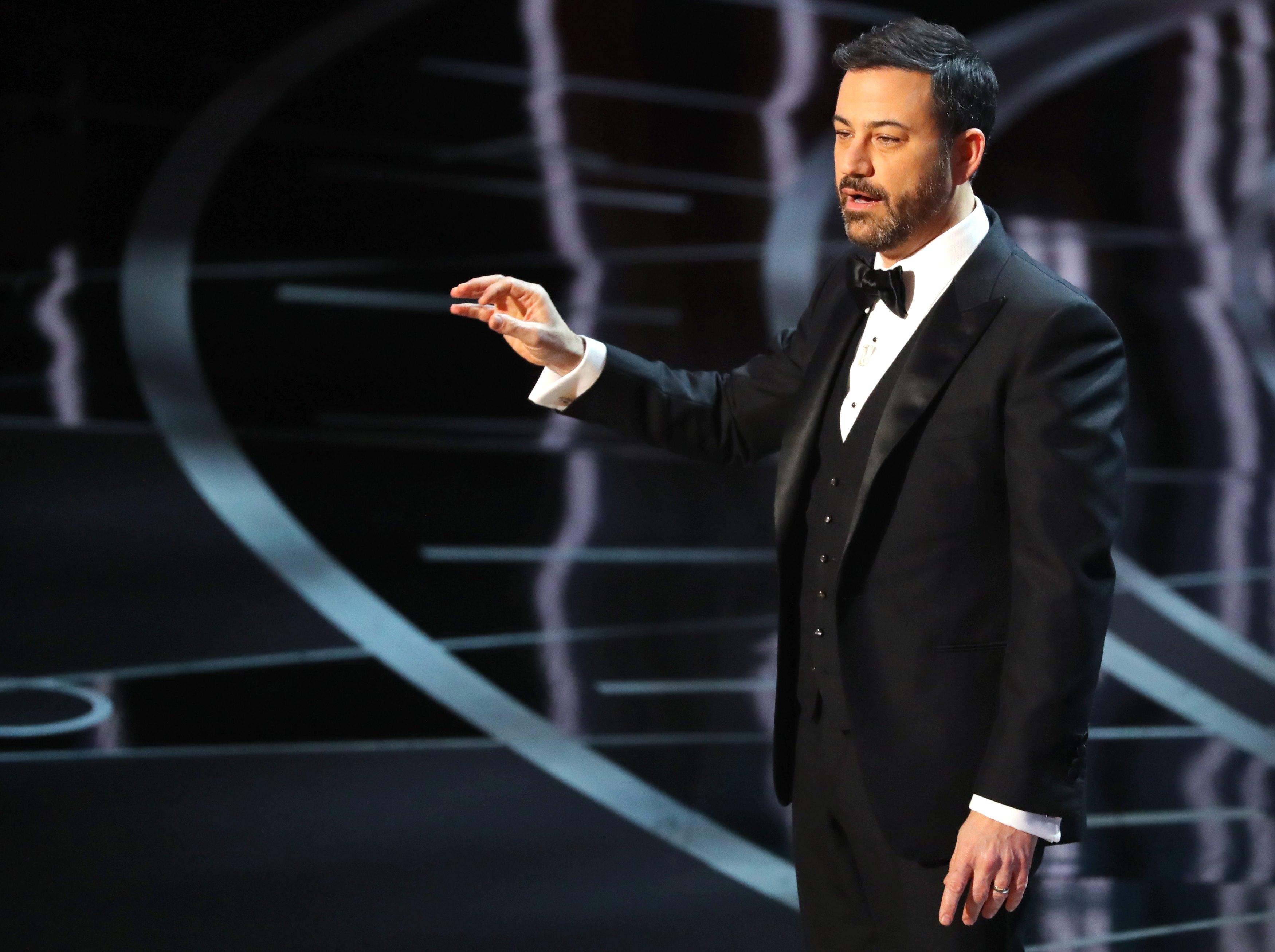 The sight of late-night comedian Jimmy Kimmel vulnerable, in tears, has become increasingly common. Yes, puckish Jimmy Kimmel -- veteran of "The Man Show," a comedian who could previously be counted upon for a good prank war with Matt Damon, less so for any heady partisan declaration -- has undergone something of a transformation. He's become woke.

The "Jimmy Kimmel Live!" host wept when recounting the story of his infant son's open-heart surgery, his voice cracking as he detailed the confusion and chaos and fear during those painfully long moments in the hospital room. He sobbed when discussing the October 2017 massacre in Las Vegas, Kimmel's hometown, pointedly challenging President Trump and Congress to do something -- "anything" -- about guns. And just weeks ago, he paused -- his voice wavering -- as he said, "children are being murdered" in wake of the Parkland, Florida, shooting.

And for the second year in a row, Kimmel has been given one of the biggest television platforms in the world as the Academy Awards' emcee. Ahead of Sunday's telecast, many are wondering what kind of bearing, if any, Kimmel's newfound outspokenness will have on the program.

Yet Kimmel is not the only being or entity to change -- the entertainment industry itself has entered uncharted terrain. Just last year, Harvey Weinstein was in the Dolby Theatre audience, among the attendees vying for a Best Picture statue. Today, Weinstein's downfall has been a catalyst in spawning and fueling the Time's Up and #MeToo movements, respectively.

In a recent New York Times report, however, Oscar producers and ABC executives indicated that they wanted to keep displays of political activism contained.

"We certainly want to honor and respect Time's Up and allow that message to be heard," Channing Dungey, president of entertainment at ABC, told The Times. "But we're trying to make it more planned than spur of the moment -- it has its moment and then doesn't feel like it overshadows the artists and films being honored."

But if other stops on the awards season trail are any indication -- the coordinated protest of wearing black at the Golden Globes, or the all-female presenters at the Screen Actors Guild Awards -- continued allusions, if not dedicated tributes, to workplace injustice and women's inequality during the Oscars are likely.

This dynamic could manifest in a tricky tightrope act for Kimmel as the evening's host, requiring him to both jauntily poke fun at nominees or also acknowledge those who have spoken out.

"Are you nervous at all that you're going to strike the right tone?" ABC News' Paula Faris asked Kimmel last week.

"Yeah, I do worry about that," he replied. "Because I have a tendency to not strike the right tone."

Kimmel has repeatedly asserted that he was loath to jump into the political fray -- and not actively looking to become "America's conscience," as some outlets have called him.

"I want this to be a comedy show," he said to his audience after 58 people were killed in Las Vegas. "I just want to, you know, laugh about things every night. But, that -- it's becoming increasingly difficult lately."

But despite the pitfalls of partisanship, and despite the potential of alienating some viewers, Kimmel stands by what he says and how he says it, a surefootedness that he will carry into Sunday's broadcast.

"Not at all," Kimmel said. "I think that it's almost necessary now."