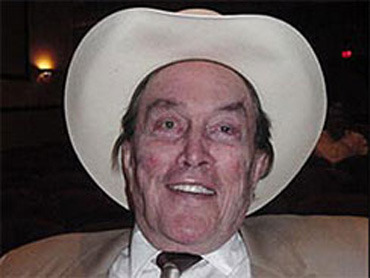 Country music singer and business entrepreneur Jimmy Dean has died at the age of 81.

The station spoke with Dean's wife, Donna, Sunday night. She was grieving and said the following:

"I definitely need my privacy right now, and am not available for interviews. My husband died of natural causes, and funeral services are pending."

She told The Associated Press that he had some health problems but was still functioning well, so his death came as a shock. She said he was eating in front of the television. She left the room for a time and came back and he was unresponsive.

Four months ago, Dean, who had a number one hit "Big Bad John" in 1961, was inducted into the Country Music Hall of Fame.

Born in 1928, Dean was raised in poverty in Plainview, Texas, and dropped out of high school after the ninth grade. He went on to a successful entertainment career in the 1950s and '60s that included the nationally televised "The Jimmy Dean Show."

In 1969, Dean went into the sausage business, starting the Jimmy Dean Meat Co. in his hometown. He sold the company to Sara Lee Corp. in 1984.

Dean lived in semiretirement with his wife, who is a songwriter and recording artist, on their 200-acre estate just outside Richmond, where he enjoyed investing, boating and watching the sun set over the James River.

In 2009 a fire gutted their home, but his Grammy for "Big Bad John," a puppet made by Muppets creator Jim Henson, a clock that had belonged to Prince Charles and Princess Diana and other valuables were saved. Lost were a collection of celebrity-autographed books, posters of Dean with Elvis Presley and other prized possessions.

Donna Meade Dean said the couple had just moved back into their reconstructed home.

With his drawled wisecracks and quick wit, Dean charmed many fans. But in both entertainment and business circles, he was also known for his tough hide. He fired bandmate Roy Clark, who went onto "Hee Haw" fame, for showing up late for gigs.

The Chicago-based company let him go as spokesman in 2003, inciting Dean's wrath. He issued a statement titled "Somebody doesn't like Sara Lee," claiming he was dumped because he got old.

"The company told me that they were trying to attract the younger housewife, and they didn't think I was the one to do that," Dean told The Associated Press in January 2004. "I think it's the dumbest thing. But you know, what do I know?"

Sara Lee has said that it chose not to renew Dean's contract because the "brand was going in a new direction" that demanded a shift in marketing.

Dean grew up in a musical household. His mother showed him how to play his first chord on the piano. His father, who left the family, was a songwriter and singer. Dean taught himself to play the accordion and the harmonica.

His start in the music business came as an accordionist at a tavern near Bolling Air Force Base in Washington, D.C., where he was stationed in the 1940s. After leaving the Air Force in 1948, he fronted his band, the Texas Wildcats, and drew a strong local following through appearances on Washington-area radio.

By the early 1950s, Dean's band had its first national hit in "Bummin' Around."

"Big Bad John," which is about a coal miner who saves fellow workers when a mine roof collapses, became a big hit in 1961 and won a Grammy. The star wrote it in less than two hours.

Dean in February was elected to the Country Music Hall of Fame. He was to be inducted in October and his wife said she thinks he was looking forward to it.

Dean became a headliner at venues like Carnegie Hall and the Hollywood Bowl and became the first country star to play on the Las Vegas strip. He was the first guest host on "The Tonight Show," and also was an actor with parts in television and the movies, including the role of James Bond's ally Willard Whyte in the 1971 film "Diamonds Are Forever."

Besides his wife, Dean is survived by three children and two grandchildren, Donna Meade Dean said. Arrangements have not be made, but it will be a private service, she said.

In the late '60s, Dean entered the hog business - something he knew well. His family had butchered hogs, with the young Dean whacking them over the head with the blunt end of an ax. The Dean brothers - Jimmy and Don - ground the meat and their mother seasoned it.

The Jimmy Dean Meat Co. opened with a plant in Plainview. After six months, the company was profitable.

His fortune was estimated at $75 million in the early '90s.

Having watched other stars fritter away their fortunes, Dean said he learned to be careful with his money.

"I've seen so many people in this business that made a fortune," he told the AP. "They get old and broke and can't make any money. ... I tell you something, ... no one's going to play a benefit for Jimmy Dean."

Dean said then that he was at peace at his estate and that he had picked a spot near the river where he wanted to be buried.

"It's the sweetest piece of property in the world, we think," he told the Richmond Times-Dispatch. "It sure is peaceful here."