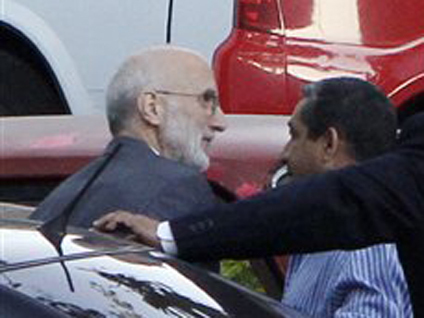 HAVANA - Former President Carter met with a jailed American contractor before leaving Cuba on Wednesday but said Cuban leaders had made it clear they do not plan to release him.

The announcement was a disappointment to supporters of Alan Gross after the trip had raised expectations the 86-year-old former American president would be allowed to bring the Maryland native home. Gross is serving a 15-year sentence after being convicted earlier this month of bringing communications equipment into Cuba illegally.

State Department officials have said privately that Cuban authorities indicated they might release Gross on humanitarian grounds following the trial. Despite rampant speculation, Carter said outright Tuesday that he was not in Cuba to secure Gross' release, CBS News' Portia Siegelbaum reported.

"The Cuban officials made it very clear to me before I left my home that the freedom of Alan Gross would not be granted," Mr. Carter said.

He said he met with Gross at an undisclosed location Wednesday morning, and that the 61-year-old contractor told him he had lost 88 pounds since his arrest in December 2009.

"He still seems to be in good spirits, professing his innocence," Mr. Carter added.

Mr. Carter said Gross's lawyer plans to appeal his conviction, and if that fails, "perhaps in the future an executive order might be issued to grant him a pardon, a release, on humanitarian grounds." Gross's 26-year-old daughter and elderly mother are both suffering from cancer.

The former U.S. president said he believes Gross is "innocent of any serious crime" and did not pose "any serious threat" to the Cuban government.

In Washington, the U.S. State Department said it regretted that Havana did not free the contractor with Mr. Carter's visit.

"We are disappointed that he did not come back with Mr. Gross," spokesman Mark Toner said. "We believe he should have been released long ago."

"We welcomed each other as old friends," Mr. Carter said of the meeting with the 84-year-old former Cuban leader. He said Fidel Castro "seems to be in good health."

On hand to see Mr. Carter off, Raul Castro said the former president spent six hours with him and about an hour with Fidel. He called the visit "good" and said progress must be made on a solution to the two nations' common problems.

"We are ready," Castro told reporters, adding that any talks with Washington must be between equals.

Human rights activist Elizardo Sanchez said Mr. Carter told the dissidents he "wanted to express his solidarity and his recognition of the movement for civil rights and also the emerging civil society.

"Hopefully his visit will be useful even if it is just one step toward the normalization of bilateral relations between the governments of Washington and Havana."

Before Mr. Carter's news conference, hope had been rising in Washington that the former leader would bring Gross home. Last August, the 39th U.S. president and winner of the 2002 Nobel Peace Prize traveled to North Korea to secure the release of an imprisoned American, and many expected the same sort of result in Cuba.

"It is what everyone is hoping for and many of us are expecting," a congressional staffer who deals with U.S.-Cuba relations told AP. "To invite Carter to visit Havana strongly suggests a willingness to make a humanitarian release of Alan Gross, but the Cuban government is also looking for signals from Washington, and those signals haven't always been clear."

The staffer spoke on condition of anonymity due to the sensitivity of the issue.

Gross was arrested while working on a USAID-backed democracy-building project and convicted of crimes against state security earlier this month in a case that has blocked improved ties between the U.S. and Cuba.

Gross has said he was working to improve Internet communications for Cuba's tiny Jewish community. Havana considers such U.S. projects to be aimed at toppling the government.

Mr. Carter said he discussed Gross' case with Cuban officials but was visiting to talk about strained ties.

He criticized Washington's decades-old embargo against Cuba as well as a ban on American tourist travel to the island. He also called for the release of five Cuban agents serving long prison sentences in the United States, a hot-button issue in Havana, where they are hailed as heroes for trying to infiltrate Cuban exile groups.

Mr. Carter downplayed the possibility of swapping them for Gross, however, as have Cuban officials.

"I did not come here with the idea of arranging any kind of swap," Mr. Carter said. "I think the two cases ... are completely separate."

Washington and Havana have not had formal diplomatic relations since the 1960s, and the United States maintains economic and financial sanctions on the island.

U.S. officials say no thaw in relations is possible while Gross is in prison.

Mr. Carter, who was president from 1977 to 1981, previously visited Cuba in 2002, becoming the only former U.S. president to do so since the 1959 revolution that brought Fidel Castro to power.

"Carter is an honest man," Raul Castro said Wednesday. He added that of the various U.S. presidents the Castros have seen come and go, Mr. Carter "was the one who had a better position toward Cuba."