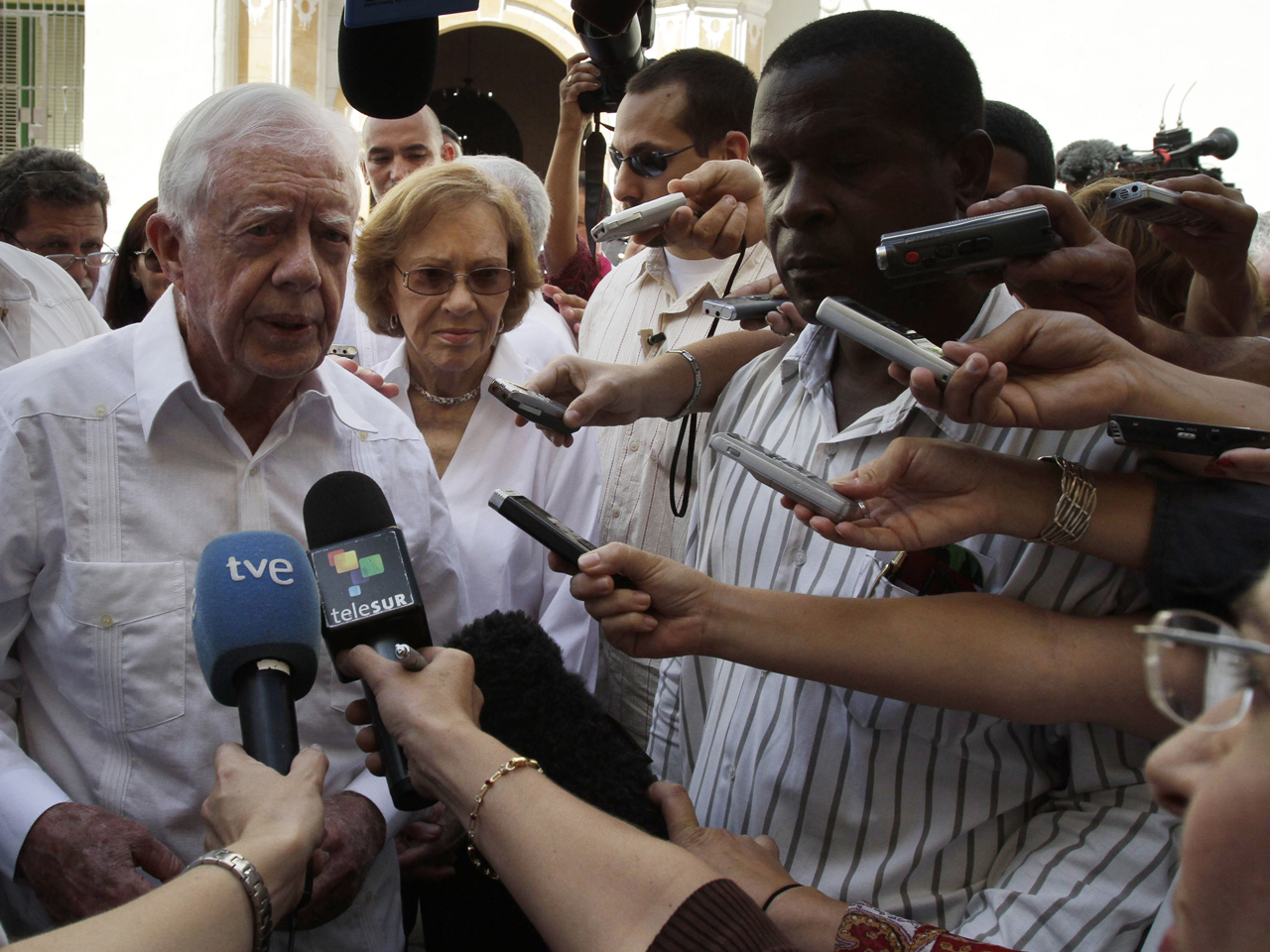 Havana -- Why shouldn't we take former President Jimmy Carter at his word?

Despite rampant speculation, Carter, speaking in Spanish this morning, told the press that he was not here to take out imprisoned U.S. contractor Alan Gross.

The former President insists that his is a private visit at the invitation of the Cuban Government, during which he hopes to "contribute to better relations" between the United States and Cuba.

Carter admitted to discussing "some aspects of the case with some Cuban officials" but said he is "not here to take Gross out of the country."

Gross was jailed for more than a year before being sentenced to 15 years in a two-day trial for sedition earlier this month. Gross worked for Bethesda-based Development Alternatives Inc. that received $4.5 million dollar contract from U.S.A.I.D. to distribute illegal satellite equipment designed to escape government controls as part of Washington's long term efforts to install democracy in Cuba through regime change. The U.S. State Department has declared Gross' imprisonment a major obstacle to any further improvement in bilateral relations.

Carter ducked the question of whether he would see Gross before leaving.

No one has yet offered an explanation of why the Cuban Government is interested in having Carter visit. A press statement from the non-governmental Carter Center says the purpose of the 48-hour visit is to "learn about new economic policies....and to discuss ways to improve U.S.-Cuba relations." But we haven't heard from the Cubans as to what they hope to get out of this trip. Since coming into the White House, President Obama has eased restrictions on travel to Cuba, particularly for Cuban Americans, and lifted some of the restrictions preventing Cubans, particularly artists and musicians from traveling to the U.S. But, Havana has been quite critical of Obama for not doing anything to change Washington's policy of undermining the Castro government and maintaining the embargo. A recent series of programs on Cuban TV portray continuing U.S. efforts to recruit agents in Cuba and to develop internet networks that could be used to secretly send damaging information out of the country.

Author Peter Kornbluh, who is currently working on a book about the history of back channel talks between Cuba and the United States, says he believes "Carter harbors regrets for not normalizing relations with Cuba during his presidency and is committed to doing what he can so that the Obama Administration does not pass up the opportunity to improve ties." For the Cubans, says Kornbluh, "Carter is the highest level intermediary possible that they can have with the Obama Administration and the American public."

Carter will be formally received by President Raul Castro late Tuesday afternoon and the two are scheduled to dine together afterwards. Cuban parliament president Ricardo Alarcon was spotted arriving at the hotel, the Santa Isabel, where Carter is staying earlier today. Alarcon has been Cuba's point man on U.S. Cuba relations for many years and led the Cuban delegation to the first bilateral migration talks between the two countries back in the 1990s. And Monday night, Carter had dinner with Foreign Minister Bruno Rodriguez at the Hotel Nacional's Aguiar restaurant.

Accompanying Carter on his first public visits Monday to Havana's Jewish Community Center and to a meeting with Cardinal Jaime Ortega, was Joana Tablada, the deputy head of the Foreign Ministry's North America Division--a big contrast to Carter's first visit to Cuba when he was squired about by then-President Fidel Castro.

During a meeting following his arrival, Carter told employees and diplomats at the U.S. Interests Section, Washington's lone diplomatic outpost in Cuba, that he would also be seeing Fidel Castro -but it is not known when that meeting is taking place. The elder Castro, who gave up his public posts in 2006 to his younger brother Raul, hosted Carter in 2002. In May of that year Carter became the first U.S. President - former or otherwise - to travel to the island since Castro's 1959 revolution. The countries still do not have diplomatic relations although both maintain "interests sections" in each other's capitals.

Dissident blogger Yoani Sanchez broke the news Tuesday on Twitter that Carter will be meeting with her and other opposition figures early Wednesday morning. They have been invited to his hotel to talk about the human rights situation here. During Carter's 2002 visit he also met with dissidents and delivered a speech in Spanish at the University of Havana, which was broadcast live by Cuban TV and radio, calling for an end to the U.S. economic and trade embargo against the island as well as for more civil rights and political plurality here.