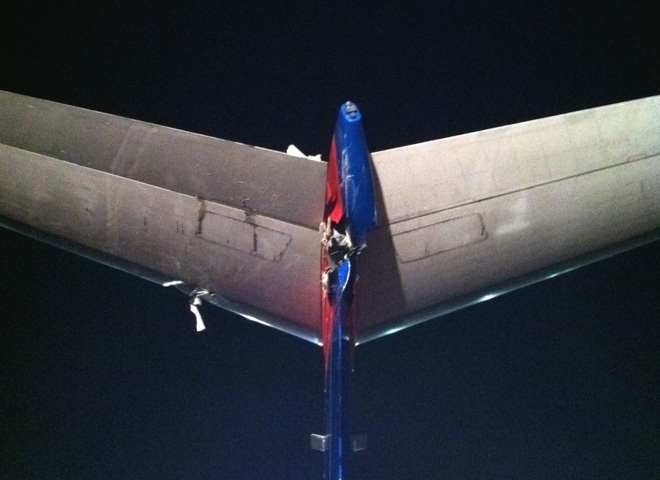 The Airbus A380 struck the left horizontal stabilizer of the Bombardier CRJ-700 as it taxied past, sending the smaller plane spinning like a toy.

The rudder, vertical fin and horizontal tail of the Bombardier were damaged. A total of 586 passengers and crew members were aboard the two aircraft, but no injuries were reported on either plane.

Investigators will try to determine if there was a breakdown in communication between the tower and the cockpit.

The world's largest passenger jet has a wingspan of 262 feet - nearly the length of a football field. JFK Airport has a standard 75-foot-wide taxiway, which means the wings of the A-380 easily extend over the roadway.

"If that jumbo jet was cleared to the runway or whatever, he was just doing what he was told. As long as he keeps his nose wheel on the yellow line, there's not supposed to be any obstructions," retired airline pilot Jim Tilmon told CBS' "The Early Show."

But Aviation expert Michael Boyd told "The Early Show" that Monday night's incursion at JFK was a case of human error - someone was not watching where one of the planes was going.

"Forget everything else, this pilot ran into another airplane - he should know how big his airplane is," Boyd told anchor Chris Wragge. "But that doesn't change the fact we have radar systems and other backup that should have told the pilot he was moving along into another airplane. So we have a systemic breakdown here."

FAA regulations will not permit most U.S. airports to handle the A380 or 747-8 super-jumbo jets if they have inadequate space to prevent planes from colliding. Waivers have been issued by the FAA to 14 airports that have agreed to follow specific procedures to accommodate the larger planes.

Boyd said it was not an issue of size - that the super-jumbo was too big for the airport - but a matter of air traffic control management.

"The reality is, I don't care if his nose wheel was on the middle of the taxiway," Boyd said. "He knows he has a big airplane and he ran into another airplane, so the bottom line of it is we have a pilot at the bottom line who screwed up. But we have other systems there that should have avoided this, and that's what we have to look into."

The accident comes on the heels of several other aviation incidents in the past few months.

Air traffic controllers in both Washington, D.C., and Tennessee fell asleep in the tower.

Airplane inspections will also be given more attention following Southwest Flight 812 on April 1, when a hole ripped open in the fuselage at 34,000 feet.

Luckily no one was hurt in any of these cases, but the string of close calls is causing concern of systemic problems in the aviation industry.

The problem of planes colliding with each other on runways — or with baggage carts, other vehicles or people that might be crossing runways — has been a top aviation safety concern since the late 1980s, when there was a spate of deadly incidents.

Among the steps taken by FAA have been briefings on runway safety for air traffic controllers, improved airport signs and other markings so that pilots know where to turn, and installation of runway lights that turn red to warn pilots against entering or landing on the runway or taxiway. However, only about two dozen airports have the runway lights.

Beginning in 2001, the FAA began installing warning systems that collect and analyze data from airport radar in order to detect potential collisions on airport runways and taxiways. When a potential collision is detected, controllers receive visual and audio alerts. But the NTSB has said the alerts don't give flight crews enough time to react.

The agency also has been encouraging airlines to equip cockpits with electronic displays that show pilots the positions and movements of all aircraft on runways and taxiways. However, the agency has stopped short of requiring the equipment and it has not been widely adopted.

In 1977, in what remains the world's deadliest aviation accident, two jumbo jets collided on a runway on Spain's Canary Islands, killing 583 passengers and crew members.

The worst U.S. runway accident involving two aircraft was a collision between a USAir 737 and a Skywest Metroliner commuter plane at the Los Angeles airport in 1991. Thirty-four people were killed.

Monday's collision shows the complexity of ground operations, a part of air travel often overlooked by passengers eager to get out of their seats and on their way home, experts said.

Working ground control at a busy airport like JFK is one of the most demanding jobs in the nation's air traffic control system, Bill Voss, president of the Flight Safety Foundation, an advocacy group, told the Associated Press.

"It is extremely complex, highly visual, and the workload can become almost superhuman," he said.

Boyd says the recent mishaps are indicative of an air traffic control system in decline.

"The real issue here is our air traffic control system - the air industry is accommodating it. There's $10 billion to $12 billion in excess costs that airlines are incurring (and passing on to us) because we have an air traffic control system a perfect relic of the 1980s. As a result of that, we have a safe system, but not an efficient system and not one that can be as safe as possible.

"The FAA will tell you we have a new system, next gen, but when you look back, it's gone year after year with no progress whatsoever. It's one of the things until the airline industry stands up and tells the FAA, 'Fix it or else,' this is going to go on and on, because there is no real fix to it in the works."