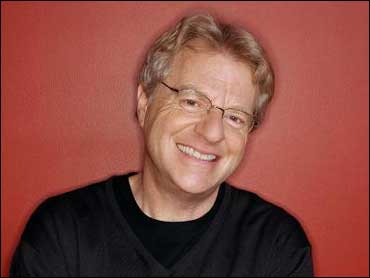 After more than 3,500 episodes, 30,000 guests and countless fights, "The Jerry Springer Show" is celebrating its 20th anniversary.

Its new season kicks off Monday, and Springer took a look back at his crazy, yet wildly successful career with Early Show co-anchor Erica Hill.

When his show premiered, it was more of a traditional talk show. Springer, who started as a news anchor, initially tackled serious topics and interviewed high profile guests, such as the Rev. Jesse Jackson and Oliver North, among others.

So how did "Springer" morph into a show famous for wacky guests and unusual topics?

"Someone was drinking," Springer joked. "No, actually how it happened ... the only decision we made was to go young. Basically, we copied Rikki Lake in the beginning, because everyone was trying to be like Oprah and go after middle-aged housewives -- what they called the demographic at the time.

"And Rikki Lake came along and had young people. We said, 'Why don't we go after that audience -- be one out-of-two rather than one-out of twenty?' We went after her audience -- young people on stage, young subject matters. Young people are crazier than old people, much more open about their lives and when, Universal bought us, they said, "From now on, you only can do crazy, so that's how. We backed into it," he explained.

Only doing crazy seems to work.

"It certainly helps with my bills but, you know -- it's stupid," he said.

Springer admits that he doesn't watch his own show.

A big part of "Springer" is the on-camera fights. Are they real, or staged?

According to Springer, the punches are real.

Looking back over the past 20 years of shows, Springer says his most memorable moment was a guest who married his horse.

"I came out against it, let there be no question," but the viewers ate it up. "We did a follow-up show because the horse left him," he added.

The "Jerry Springer Show" has become iconic in many ways, and actually spawned and opera at one point that did really well.

Actor Harvey Keitel plays him in "Jerry Springer - the Opera."

"I wish it were about somebody else, but they did a very good job and it won all the awards in England," he said. "It's about me, about my show. But, you know, I can't take any credit."

Springer has gone on to other shows including "Dancing with the Stars" and "America's Got Talent," where we got to see another side of the infamous talk show host.

Springer wanted to do "Dancing with the Stars" so he could learn how to dance for his daughter's wedding.

"That was the first time I'd ever been on television as myself, because I'm always..." Springer was stopped in his tracks and was filled with emotion to see the show played back. "There she is, I love her. She has a little boy now, happily married," the proud father and grandfather said.

Ironically, Springer learned to dance the waltz for the father-daughter dance, but his daughter's beautiful white wedding gown took over.

"In the middle of the dance, she looked up and said, 'Dad, they can't see our feet' -- because her wedding gown covered them. I didn't have to be on the show. The whole thing was a scam! I could have just rocked back and forth!" Springer joked. "But, no -- yeah, that was great!"

The proud grandpa couldn't be happier.

The "Jerry Springer Show" continues to do well in the ratings. Recently (in reruns), it beat "Ellen" (also in reruns) four weeks in a row in total viewers -- not to mention that 65 other talk shows have started and failed since Springer's premiere in 1990.