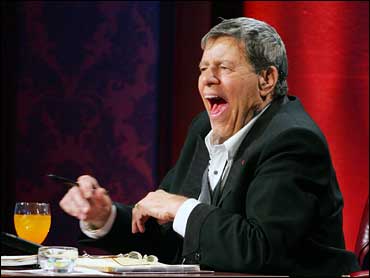 Jerry Lewis dropped an anti-gay slur - the same one that got Isaiah Washington of "Grey's Anatomy" in trouble - during the 18th hour of his annual Labor Day Telethon.

He apologized Tuesday for a "bad choice of words."

The 81-year-old showman - prowling about the stage during the live telecast Monday in Las Vegas - was goofing around and dodging his cameraman, then went into a ramble about imaginary family members.

"Oh, your family has come to see you," he said, speaking to the camera and gesturing toward thin air.

"You remember Bart, your older son," he said, and motioning toward another unseen character, "Jesse, the illiterate f---.

"No," Lewis said, quickly stopping himself before continuing.

"It also feeds a climate of hatred and intolerance that contributes to putting our community in harm's way," Giuliano said.

In a statement Tuesday, Lewis said he was making "a joking comment to a member of my production team."

"I apologize to anyone who was offended," he went on. "Everyone who knows me understands that I hold no prejudices in this regard. In the family atmosphere of the telethon, I forget that not everyone knows me that well.

"That something like this would distract from the true purpose of the telethon pains me deeply. ... I accept responsibility for what I said. There are no excuses," he said.