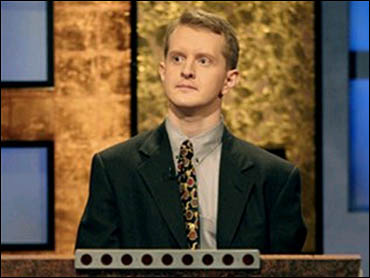 Quiz-show marvel Ken Jennings has broken another record on "Jeopardy!"

Jennings won $45,099 on the episode that aired Wednesday, bringing his total earnings to $2,197,000 to make him the top TV game-show winner ever.

Jennings, a 30-year-old software engineer from Salt Lake City, began his 66-appearances-and-counting streak on the episode that aired June 2. Since then, he has richly profited from a rule change made only last year, at the start of the syndicated game show's 20th season, that removed its five-appearance limit. Now a contestant can continue playing as long as he wins.

On the "Jeopardy!" episode that aired Sept. 15, Jennings broke the record for longest winning streak on any television game show.

Where might it all stop? No one's confirmed it, but TV Week reported in September that Jennings lost after his 75th straight win, amassing a total of about $2.5 million. "Jeopardy!" episodes are taped in advance.

During the streak, Jennings has appeared on "The Tonight Show with Jay Leno," presented a Top Ten list on "Late Show with David Letterman," and been a "Person of the Week" on ABC's "World News Tonight."

He has defeated 130 challengers and given more than 2,000 correct responses, including Wednesday's Final Jeopardy question, for which the clue was: "This king was the great-grandfather of France's King Louis XV."

Jennings sweetened his day's total take by $7,499 with his reply: "Who is Louis XIV?"

Besting Olmstead's record had been Jennings' goal "for a while," he told host Alex Trebek, adding, "I actually know Dr. Olmstead a little bit, and he's been very supportive."