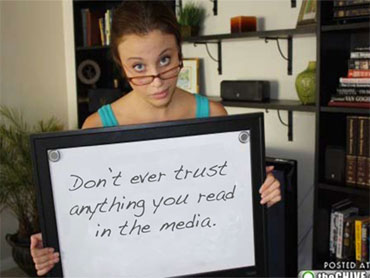 America got a lesson in media theory this week. It won't be remembered, though, at least not by anyone who stands to benefit from it.

The 33-image pictorial story of an attractive woman quitting her job (and getting back at her chauvinist boss) with messages on a dry-erase board, which went viral to the tune of 250,000 Facebook shares, was a hoax.

You know, like the story of Donald Trump leaving a $10,000 tip on an $80 restaurant bill from the very same tricksters. And the story about an 18-year-old girl accidentally texting her dad about losing her virginity - also from the same tricksters.

Oh, and "balloon boy". But October was so long ago.

Peter Kafka at All Things Digital was rightly skeptical of the prank before it was exposed. Although as of 2 p.m. Tuesday afternoon, one of the pranksters was still insisting that "Jenny's very real."

In truth, "Jenny" is an aspiring actress named Elyse Porterfield who answered an ad placed by the image site the Chive, which posted the photos.

The part I didn't get was about how "HOPA" was supposed to stand for "hot piece of a**" - but only when "Jenny" shook the dry erase board to jumble the letters to the unpronounceable "HPOA." And if the guy thought no one was listening, why wouldn't he just say it? Weak sauce, the Chive.

Except we bought it. Which the Chive pretty much isn't letting anyone forget.

But don't worry. We will.

These are the most stressful tech workplaces
Ken Millstone