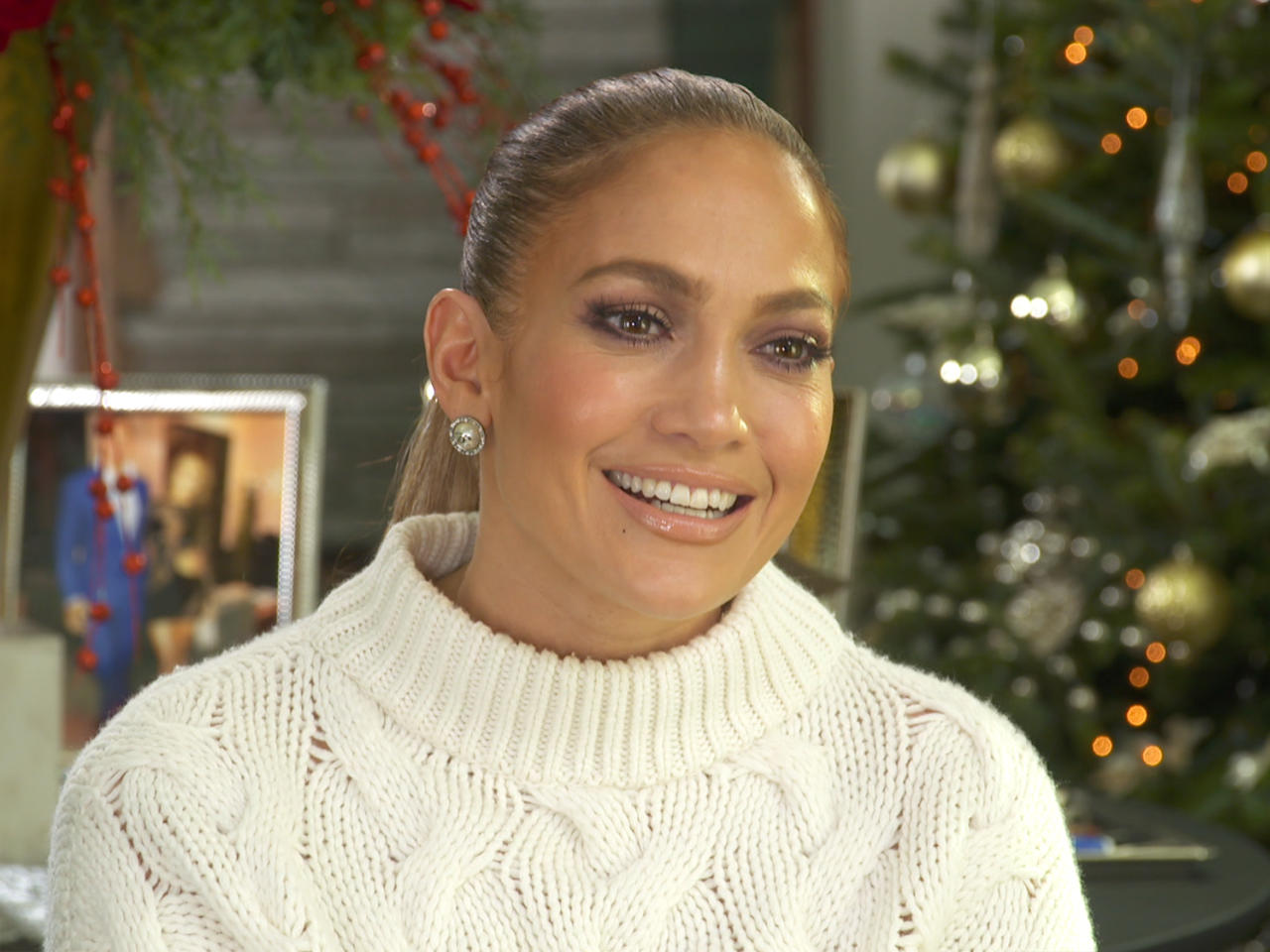 Jennifer Lopez is already one of the most recognizable people on the planet – a global pop icon and a movie star, known to millions as J.Lo, and now engaged to A-Rod, a.k.a. Alex Rodriguez, a former major league baseball superstar.

But after 25 years of celebrity, and more than her share of celebrity news, Lopez, the artist, is generating something new: Oscar buzz.

"I look at your film record – 40 films nearly," said "CBS This Morning' co-host Tony Dokoupil. "You've been a lot of good ones, you've been in a lot of big box office films."

"No Oscar so far, no Oscar nomination so far. Do you think this may change things? Is this the one?"

The movie is "Hustlers," and her character, Ramona, leads a group of exotic dancers who decide to steal from the men who ogle them.

And Ramona's big turn on the pole? That was Lopez's idea.

"I said she had to do some amazing thing on stage, some dance that is very indicative of who she is," Lopez said.

"When she does it, that means you have to do it."

Dokoupil asked, "Was there a moment of hesitation?"

"Yes, there's always that kind of human fear of not wanting to expose yourself in a way that you haven't done before, and that meant in this case, not just emotionally, but physically," she replied. "Even just as a woman being insecure with your body, and thinking …"

"It's hard to imagine you feeling that way."

"Well, I worked really hard so I wouldn't feel insecure. But I still felt very vulnerable. And when you go out on a set and there's 300 men there and whether they're background actors or not they're still men! And you're thinking to yourself: Ohmygod, I gotta get up there in this outfit right now!"

And Lopez not only danced like she never had before; she says she also acted with a new fearlessness. "What I wanted to do for the first time was not to stop myself in the middle of a take or anything or go, 'No, that's not right. I wanted to do this.' No, I really just for the first time was, like, any impulse I get I'm gonna follow it. And then from there, whatever happens, happens. And if it sucks? Take two. And if it doesn't? Great. We got something crazy and good!"

It's the kind of confidence that might only come with age. And believe it or not, Lopez celebrated a milestone birthday this past summer.

"I don't feel any different than I did when I was 25, 26, 27, 28 years old, you know?" she said of turning 50. "I just think now what's different is I have all this experience.  But I still feel youthful, alive, and at the beginning of great adventures. That's how it feels."

Don't be fooled by the rocks that I got
I'm still, I'm still Jenny from the block…

Her own adventure began back in the Bronx, one of three girls in a family often short on money, but not on music. "The word 'bills' was something I knew from a very young age,' she said. "I remember having holes in my shoes, but I didn't feel like I ever needed or wanted anything. It was just all that I knew."

"So, then when did the dreaming start?" asked Dokoupil. "When did the thought occur to you, like, I'm gonna dance my way out of here?"

"My mom was into musicals and music, and so, I remember being, like, very young thinking: I want to be in musicals. I wanna sing and dance and act. I wanna do all three. I wanna be, like, in 'West Side Story.'"

At just 26, she landed the title role in "Selena," a major biopic about the late Latin pop star. But Lopez's career soon took a turn.

"I always wanted to make a record. And my manager at the time was like, 'Well, you know, you won't be taken seriously as an actress if you make a record. So, how about we just stick to the acting right now?' And I had just done 'Out of Sight' and kind of getting good notices. But once I did the movie 'Selena,' I was like, 'No, I'm doing it.'"

But while Lopez was almost universally successful, she wasn't always universally respected.  And her relationships with other mega-stars, including rapper Sean Combs, actor Ben Affleck, and singer Marc Anthony, made her a tabloid fixture known as much for her love life as her work.

"Oh, but it did. It did for a long time," she said. "It did because I was, you know, talked about in a way that discredited any sort of talent I had. And it was hard because I started thinking, well, maybe I am a fraud. And I think most artists go through that anyway. But here I was, like, it was being magnified."

These days, Lopez doesn't even play the game of kiss-and-tell, as Dokoupil found out the hard way after visiting the set of her next film, "Marry Me." It's a romantic-comedy that inevitably calls to mind her real-life engagement to Alex Rodriguez.

He asked, "So, because the movie's called 'Marry Me,' and because you wear a wedding dress in the movie, and because of everything else going on in your life, I gotta ask right now, like, when? When are you getting married?"

"Well, I'm not gonna tell you right now!" she laughed.

"Do you have a date for you, though?"

"Oh, I wouldn't even tell you that yet!"

"Of course. I just think certain things have to be sacred, and be protected. And you have to be careful and delicate. It's just not me. It's another person. It's our kids. It's our family. And I learned that along the way."

And she learned something else recently, after visiting with, of all people, Supreme Court Justice Ruth Bader Ginsburg, who was married to her late husband Marty for more than 50 years.

Lopez recalled asking Ginsburg, "'What's your piece of advice?' And she said, 'It's good to be a little deaf sometimes.' And I was like, 'Oh, okay.' She's like, 'An unkind word, people are not perfect. Sometimes, you know, you just have to let it go.'

"And often Alex and I will now reference RBG, like, stay calm, stay calm. You know, when everything gets crazy or people get out of control, when there's, like, heightened emotions, don't go there with people. Just stay calm."

That may not be easy, as Lopez prepares to perform at this year's Super Bowl halftime show in February.

"It's moments," she said. "Like, you just have to find special, magical moments."

"Are you finding yours tonight?" asked Dokoupil.

"We're just in the beginning stages. You know, it's coming together. We have a little bit of time still, so I'm not worried."

Dokoupil asked, "Are you happier today than you were?"

"You say that emphatically."

"I do, because I realized that my journey to happiness wasn't about anybody else. Like, there was no man that was gonna walk into my life and make me happy."

"That I had be happy. Wasn't somebody else's job to love me. I had to love me."

Lopez has learned a lot in her first 50 years, and maybe the most important lesson for her next 50 years is also the simplest. "Doesn't matter what anybody says. I know who I am. And that's who I have to be. And I work on being the best person I can be every day."