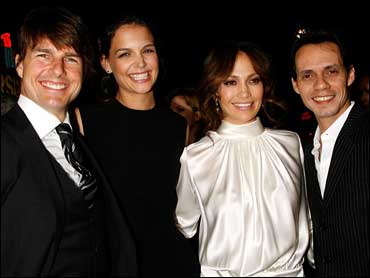 Jennifer Lopez defends people who practice Scientology and says that her dad has practiced Scientology for the past 20 years.

NBC 6's Jackie Nespral asked the singer and actress about her friend, actress Leah Remini, a devout Scientologist, and if she too is interested in the religion.

"I'm not a scientologist, I was raised Catholic," Lopez said. "But it's funny the way people come at it. To me it's so strange. These are some of the best people I've ever met in my life. You know, they're just lovely, genuine people. They way they ask is such a, 'Uh, are you (a scientologist)?' It's such a negative thing and I just don't see it that way."

Lopez has a personal connection to the faith. "My dad has been a Scientologist for 20 years. He's the best man that I know in my life and so, it's weird to me that people want to paint it in a negative way," she said.

Lopez attended the Scientology nuptials of Tom Cruise and Katie Holmes' in Italy in November. "It was a great celebration of their love … It was beautiful" Lopez said of the much-publicized event.

In Part II of Lopez's interview with Nespral, Lopez reveals why her marriage to musician Marc Anthony is the real thing, why she's a big fan of Miami and what she's doing for the Super Bowl.