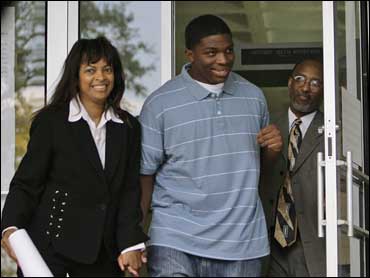 A black teenager whose prosecution in the beating of a white classmate prompted a massive civil rights protest here walked out of a courthouse Thursday after a judge ordered him freed.

LaSalle Parish Sheriff Carl Smith told CBS News that a bond of $45,000 had been set for the young man's release. Previously, the courts had declined to grant bail in this case.

"We still have mountains to climb, but at least this is closer to an even playing field," said the Rev. Al Sharpton, who helped organize last week's protest.

"He goes home because a lot of people left their home and stood up for him," Sharpton said.

Mychal Bell's release came hours after a prosecutor confirmed he will no longer seek an adult trial for the 17-year-old. Bell, one of the teenagers known as the Jena Six, still faces trial as a juvenile in the December beating.

District Attorney Reed Walters' decision to abandon adult charges means that Bell, who had faced a maximum of 15 years in prison on his aggravated second-degree battery conviction last month, instead could be held only until he turns 21 if he is found guilty in juvenile court.

The conviction in adult court was thrown out this month by the state 3rd Circuit Court of Appeal, which said Bell should not have been tried as an adult on that particular charge.

Bell is among six black Jena High School students arrested in December after a fight that left white student Justin Barker unconscious. Four were 17 at the time, and legally adults under Louisiana law.

Those four and Bell, who was 16, all were initially charged with attempted murder -- a charge that is on the list for which juveniles over the age of 14 may be charged as adults -- but the charge has been dropped to aggravated second-degree battery. One has yet to be arraigned. The sixth case is sealed in juvenile court.

Bell, the only one of the six tried so far, was convicted of the battery charge. But the state 3rd Circuit Court of Appeal said he should not have been tried as an adult on that particular charge.

Walters had said he would appeal that decision. On Thursday, he said he still believes there was legal merit to that decision but he decided it was in the best interest of the victim and his family to let the juvenile court handle the case.

"They are on board with what I decided," Walters said of the Barkers.

Publicity surrounding the case led an estimated 20,000 to 25,000 protesters to converge on the town last week in one of the largest civil rights demonstrations in recent years. Walters said the demonstration had no influence on his decision.

Walters credited the prayers of people in this small central Louisiana town with averting a "disaster" when the thousands of demonstrators descended on the town.

"The only way - let me stress that - the only way that I believe that me or this community has been able to endure the trauma that has been thrust upon us is through the prayers of the Christian people who have sent them up in this community," Walters said.

"I firmly believe and am confident of the fact that had it not been for the direct intervention of the Lord Jesus Christ last Thursday, a disaster would have happened. You can quote me on that."

When the Rev. Donald Sibley, a black Jena pastor, called it a "shame" that Walters credited divine intervention for the protesters acting responsibly, the prosecutor said, "What I'm saying is, the Lord Jesus Christ put his influence on those people, and they responded accordingly."

After the news conference, Sibley told CNN that Walters had insulted the protesters by making a false separation between "his Christ and our Christ."

"I can't diminish Christ at all. But for him to use it in the sense that because his Christ, his Jesus, because he prayed, because of his police, that everything was peaceful and was decent and in order - that's not the truth," Sibley said.

Critics accuse local officials of prosecuting blacks more harshly than whites. They note that no charges were filed against three white teens suspended from the high school for allegedly hanging nooses in a tree on campus -- an incident that was followed by fights between blacks and whites, including the attack on Barker, often described as a schoolyard fight.

The Congressional Black Caucus is asking the Justice Department to investigate possible civil rights violations in the Jena Six case that sparked the massive protest in Louisiana last week.

"This shocking case has focused national and international attention on what appears to be an unbelievable example of the separate and unequal justice that was once commonplace in the Deep South," the group of 43 lawmakers said in a letter to Acting Attorney General Peter Keisler.

Justice Department spokesman Brian Roehrkasse said the department has been closely monitoring the case of six black high school teens arrested for beating a white classmate in Jena, La. He said the department also is investigating allegations of threats made against the students and their families.

Missouri Rep. William Lacy Clay, a member of the caucus from St. Louis, called the Jena case "a prime example of the residual racism that still permeates the judicial system."

Both Walters and Schools Superintendent Ray Breithaupt said that the attack was no ordinary schoolyard fight.

"It was a premeditated ambush and attack by six students against one," the superintendent said in a press release. "The victim attacked was beaten and kicked into a state of bloody unconsciousness."

Walters' description, in an op-ed piece published Wednesday in the New York Times, was more detailed. A schoolyard fight would be punching and wrestling, he wrote. As Barker walked through a door, Walters wrote, he "was blindsided and knocked unconscious by a vicious blow to the head thrown by Mychal Bell. While lying on the ground unaware of what was happening to him, he was brutally kicked by at least six people."

They also defended their actions after nooses were found hanging from a tree on the high school grounds -- something critics say should have been prosecuted as a hate crime.

"I cannot overemphasize how abhorrent and stupid I find the placing of the nooses on the schoolyard tree in late August 2006," Walters wrote.

He said that "deserves the condemnation of all decent people.

"But it broke no law," he continued. "I searched the Louisiana criminal code for a crime that I could prosecute. There is none."

Breithaupt said the expulsion committee found the three students who hung the nooses had no history of behavior problems "and no violent act was intended when the nooses were hung."

He said the youths were sent to alternative school for nine days, served a two-week, in-school suspension, had Saturday detentions and had to attend Discipline Court and be evaluated by a social worker before returning to school.