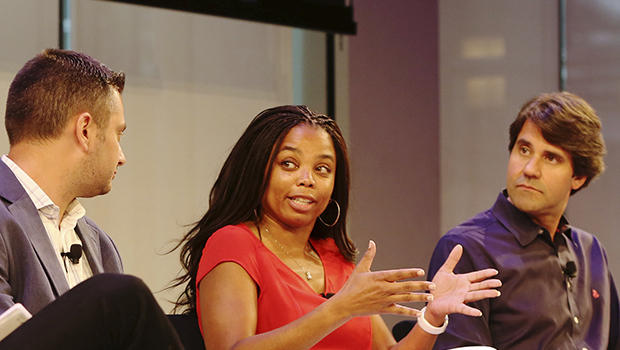 BRISTOL, Conn. -- ESPN distanced itself from anchor Jemele Hill's tweets one day after she called President Trump "a white supremacist" and "a bigot."

"The comments on Twitter from Jemele Hill regarding the president do not represent the position of ESPN," the network tweeted Tuesday from its public relations department's account. "We have addressed this with Jemele and she recognizes her actions were inappropriate."

Hill, a co-host of the 6 p.m. broadcast of "SportsCenter," also added that "Trump is the most ignorant, offensive president of my lifetime. His rise is a direct result of white supremacy. Period."

In another tweet, she said, "Donald Trump is a bigot," and went on to criticize his supporters, adding "The height of white privilege is being able to ignore his white supremacy, because it's of no threat to you. Well, it's a threat to me."

Disney-owned ESPN did not elaborate on any possible punishment for Hill, and she was on Tuesday evening's "SportsCenter" broadcast as usual.

While many Twitter users called for Hill to be fired, unemployed NFL quarterback Colin Kaepernick expressed his support, tweeting "We are with you @jemelehill."

Kaepernick, who remains unsigned after opting out of his contract with the San Francisco 49ers, received plenty of criticism -- and support -- after kneeling during the national anthem before games last season to protest police brutality.