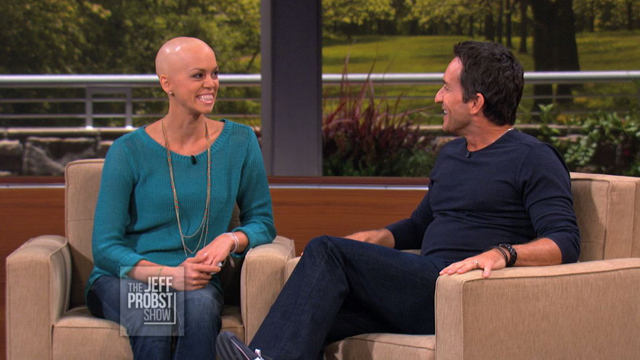 (CBS News) Jeff Probst of "Survivor" fame made his debut as a talk-show host Monday with an upbeat hour featuring non-celebrity guests who exemplify a "can-do" attitude.

Thirty-one-year old cancer victim Kelly Pozzoli, who has been told she may mot live to see her 33rd birthday, told Probst and the audience about how her diagnosis led her to a "seize the day" mentality. Because she aims to make her life as full as possible, she says with a brilliant smile, she has no time to waste on self pity.

Probst promises to check in on her journey throughout the season.

Joining her in the hour was 8-year-old Vivienne Har, and newlyweds Eileen 91, and Bob, 92. The girl has earned $50,000 for the charity Not for Sale by selling lemonade. Not for Sale is an organization fighting against human trafficking.

The nonagenarians fell in love at first sight in a nursing home and were married after a whirlwind two-week courtship.

"Survivor" fans will recognize the affable, laid-back interview style that has earned Probst four Emmys over the years. As he does in those shows, Probst relates to guests on a personal level. He asks guests to comment on one another's stories and looks to the audience for an occasional aside.

Tell us: What did you think of Jeff Probst's new show?