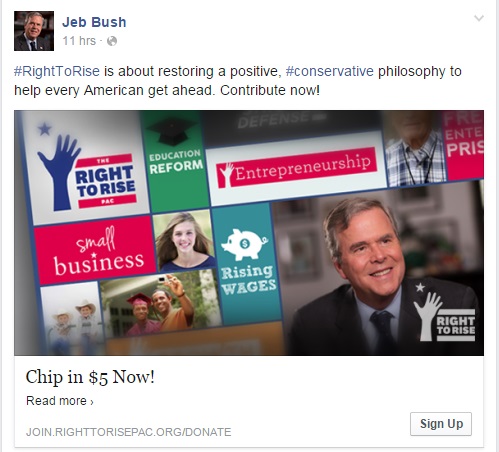 Jeb Bush is playing offense by playing catch-up. He announced Tuesday that he's formed a leadership PAC called Right to Rise, which, if you're a person considering a presidential run, is as compulsory as releasing a weightless biography. A leadership PAC allows you to raise money, hire staff, commission polls, and prepare the infrastructure necessary to start an official campaign. That's why all the candidates who have been preparing to run in 2016-- Sen. Marco Rubio, Gov. Rick Perry, Sen. Rand Paul, and Sen. Ted Cruz--created PACs long ago.

So Bush is late to the game. But when you form a political action committee far ahead of a race, you also allow financial backers to write you a check without making a real commitment. They offer tribute and embrace the pretense that your committee, Euphemisms for Ambition, is being formed simply to support candidates who share your views in the next election cycle (which for all the other presidential contenders was the 2014 cycle). Or donors can give to your leadership PAC as a way to support you in your current job as senator, without implying a commitment to your larger ambitions, which is the case for Cruz, Rubio, and Paul.

There is no such fuzziness about Bush's PAC; he has created it for the presidential election, a race that he is likely close to entering. His request for money is a more direct appeal for financial support for his presidential ambitions. There are legal barriers that mean that giving to a PAC is not the same as giving to a campaign, but support for one entity at this point will be considered a pledge of support for the official campaign. "There's only one office that Jeb is running for--or contemplating running for," says a GOP donor. "So a donation to his leadership PAC is the equivalent of saying, 'Count me in!' "

Bush's team is hoping to speed up the process and lock down donors who have been playing footsie with other campaigns. The former Florida governor has a series of fundraisers scheduled in the coming weeks to make his appeal in person.

Bush's move should quicken the activities of other candidates who now need to check in with the donors they were courting and perhaps make a few public moves of their own to show why their candidacy is just as viable as it was before Bush got in the race. Sen. Rubio of Florida is launching his book American Dreams next week, so he's one to watch closely.

In his announcement video, Bush says he's hoping to elect conservative candidates, but he wouldn't go to the trouble of shooting an on-the-street video and asking donors to give their Instagram accounts if he were only planning to ladle glory onto others. The rollout of the PAC is another way in which the medium is the message for Bush. He promised to release 250,000 emails to demonstrate his commitment to transparency. In this case, he is trying to show that despite having been off the campaign trail since 2002, he's quicker on his feet than the competition. He's on Instagram! He's on a smartphone on the street! He's running a different kind of campaign, which matches his pitch that he's a different kind of Republican.

Where this distinction will really matter is on the policy positions Bush ultimately advocates. In that way Bush's leadership PAC is different than the others, too. He is using it to send a message about what kind of a campaign he will run. On the PAC website the "What We Believe" section is built around the idea of income inequality. If that's the only place he talks about it, then it's meaningless. But that's not the expectation Bush is setting. He's sending the signal that he will talk a lot about the issue and how conservative principles can restore the American dream. Compare that with Mitt Romney, who during the 2012 campaign said the issue of income inequality should only be discussed in "quiet rooms." (Of course, Bush has his own considerable political challenges with Republican base voters on the issues of immigration, education, and taxes).

Bush and his team are promising to go places Republicans don't normally go to campaign, to get the party "out of its comfort zone." That sounds like a version of what Rep. Paul Ryan has been trying to do as he has been arguing for conservative solutions to poverty and middle-class stagnation. Bush's leadership PAC (as well as his super PAC) takes its name from an expression Ryan has used. A Bush source says that Ryan gave Bush the OK to use the name. That could be considered the PAC's first donation.