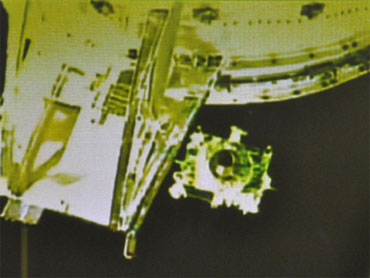 A Japanese space probe sent to the thick clouds of Venus shut itself down, and its future looks as hazy as the planet it was built to study.

The probe, called Akatsuki, which means "dawn," reached Venus on Tuesday to orbit Earth's neighbor on a two-year mission. But communication problems left scientists in the dark about whether it was successfully in orbit.

An American scientist on the probe's research team said the probe shut itself partially down and is in safe mode. That means it is sending back signals indicating it is alive, but not transmitting any data.

At first, controllers back on Earth lost contact with the probe and got modulating signals indicating that spaceship may be wobbling a bit, said Sanjay Limaye, a University of Wisconsin-Madison professor who is one of five American scientists on the Akatsuki research team.

But after a few hours, engineers at NASA and the Japanese space agency, JAXA, were able to lock on the probe's signal and found it shut itself down to protect itself, Limaye said.

"That means at least things are looking better if not perfectly the best," he said.

It would be the first time Japan has ever placed a spacecraft into orbit around another planet and comes after the country recently brought a probe back from a trip to an asteroid. Russia, the United States and the Europeans have successfully explored other planets. The Russian space program has been sending missions to Venus since 1961 with more than 30 attempts. Its early missions were marred with many failures.

Limaye said it was unclear if the probe was successfully inserted into orbit around Venus, but Gerald Schubert, a University of California, Los Angeles, scientist who is on the probe team, said he thinks it is in some kind of orbit around the hazy planet.

"There appears to be a problem, but exactly what the problem is I'm not sure," Schubert said.

Japan has long been one of the world's leading space-faring nations. It was the first Asian country to put a satellite in orbit around the Earth - in 1970 - and has developed a highly reliable booster rocket in its H-2 series.

In recent years, Japan has been overshadowed by the big strides of China, which has put astronauts in space twice since 2003 and was the third country to send a human into orbit after Russia and the United States.

Japan's space program has never attempted manned flight and instead operates on a shoestring budget that focuses primarily on small-scale scientific projects.

Akatsuki, launched May 20, is designed to monitor volcanic activity on Venus and provide data on its thick cloud cover and climate, including whether the planet has lightning. The probe is equipped with infrared cameras and other instruments to carry out its mission.

The 25 billion yen ($300 million) project is supposed to maintain an elliptical orbit around Venus, ranging from passes 190 miles (300 kilometers) from the planet's surface to outer swings 50,000 miles (80,000 kilometers) away that will allow it to comprehensively monitor weather patterns.

One of the mysteries scientists are hoping to clear up is the intensity of surface winds on Venus that are believed to reach up to speeds of 220 miles per hour (360 kilometers per hour).

Inserting the probe into orbit would be a big success for Japan, which previously failed in an effort to put probes around Mars. The Mars mission, called Nozomi, or "hope," and launched in 1998 experienced a series of technical glitches.

The program got a big morale boost earlier this year with the successful return to Earth in June of the Hayabusa probe. The probe successfully captured dust from an asteroid for the first time in history, bringing back microscopic samples from the Itokawa asteroid that could offer insight into the creation and makeup of the solar system.

It is only the fourth set of samples to be returned from space in history - including moon matter collected by the Apollo missions, comet material by Stardust, and solar matter from the Genesis mission.

The spacecraft's capsule landed successfully in the Australian Outback in June after a seven-year, 4-billion-mile (6-billion-kilometer) journey.

NASA has launched several probes that have orbited other planets: Pioneer Venus in 1978, Mars Global Surveyor in 1998 and Messenger, which is expected to settle into orbit around Mercury in 2011. The European Space Agency's Mars Express successfully reached orbit in 2003, while its Venus Express completed the maneuver in 2006.