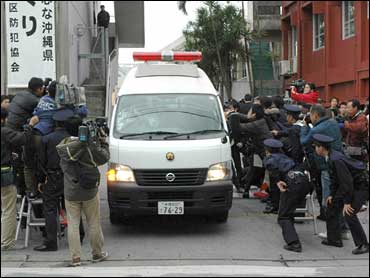 A U.S. Marine who was arrested in the alleged rape of a teenage girl in southern Japan has been released after Japanese prosecutors dropped charges against him at the request of the alleged victim, the Foreign Ministry said Friday.

Staff Sgt. Tyrone Luther Hadnott, 38, was arrested earlier this month on suspicion of raping a 14-year-old girl on the southern island of Okinawa, triggering a nationwide furor over American troop-related crimes in Japan.

Hadnott was released Friday night after the girl withdrew her criminal complaint against him, according to Ryo Fukahori, a ministry official in charge of Japan-U.S. security. As a result, the district prosecutor's office in the prefectural capital of Naha decided to drop charges against Hadnott. Rape charges in the Japanese judicial system can only be filed with a victim's complaint.

U.S. military authorities said they are holding the Marine to conduct their own investigation, Kyodo News agency reported.

In Washington, State Department spokesman Tom Casey told reporters Friday that the United States remains "very concerned about this incident" and has "great sympathies" for the girl and her family. He had no details about the legal process.

Japanese police earlier said Hadnott had admitted to investigators that he forced the girl down and kissed her, but that he denied raping her.

"The girl told us that she wished to be left alone," Chief District Prosecutor Yaichiro Yamashiki was quoted by Kyodo News as telling reporters. "Considering her feelings, we decided that it was not appropriate to pursue our indictment."

Japanese officials said the prosecutor's decision to drop the charges does not mean the problem is over.

"It does not change the fact that the incident occurred," Fukahori said, adding that the rape charges could be separately pursued by the U.S. military.

Foreign Minister Masahiko Komura said "There is no question that the incident is regrettable," while Prime Minister Yasuo Fukuda said "Japan and the U.S. must firmly take measures so that a problem like this will never be repeated."

Hadnott's Feb. 10 arrest - as well as a series of other damaging criminal accusations against some of the 50,000 American troops based in Japan - have inflamed popular anger at the U.S. military presence.

In a separate alleged rape case, U.S. military authorities pressed charges in December against four servicemen based in the U.S. Marine Corps Air Station in Iwakuni in southern Japan after Japanese prosecutors dropped charges against them, citing lack of evidence. U.S. military authorities are currently making a final decision on whether the four should be court-martialed for allegedly raping a 19-year-old woman in Hiroshima in October.

The U.S. military has since imposed tight new restrictions on troops, their families and civilian expatriates in Okinawa and elsewhere, limiting them to bases, workplaces and off-base housing. The military held a "day of reflection" last week to urge troops not to commit crimes.

The steps were part of a broad U.S. campaign since the alleged rape to soothe feelings as rising anger over the alleged crimes threatened to erupt into widespread protests against the American presence.

Japan also has introduced new security steps to curb crime around bases, including expanded information exchanges between the two countries as well as installation of surveillance cameras and joint patrols of entertainment districts around bases on Okinawa.

The alleged rape case also topped the agenda during this week's Japan visit by U.S. Secretary of State Condoleezza Rice, who expressed deep regret over the incident and said she hoped the case will not harm the countries' ties.