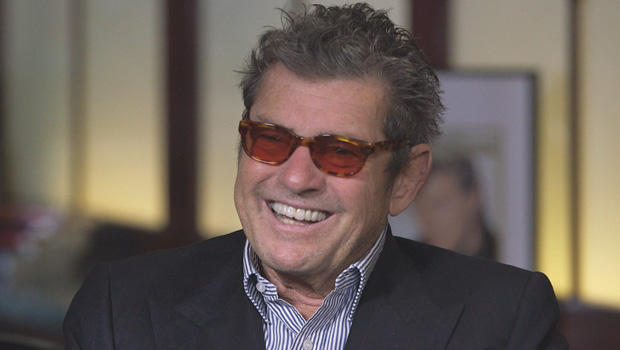 In a way, he's perhaps the most influential rock star on the planet: Jann Wenner, the man who rolled out the first issue of Rolling Stone fifty years ago this Thursday. Now he and the music magazine he created are at a crossroads, as Anthony Mason reports in our Cover Story:

It's been the cultural Bible of baby boomers for half a century -- the voice of the rock generation. Rolling Stone magazine is marking its 50th anniversary with a new HBO documentary, a giant coffee-table book, and a retrospective at the Rock & Roll Hall of Fame. Editor and publisher Jann Wenner cut the ribbon for the exhibit, which features a mockup of the San Francisco office where he started it all.

But in the middle of the celebration, Wenner announced he was putting his baby up for sale.

Mason said, "You've so successfully tied your name to this magazine that it's very difficult for a lot of people to see the two of them go different ways."

Rolling Stone was born in the Summer of Love, 1967, in the epicenter of psychedelia, San Francisco's Haight-Ashbury, home to the Jefferson Airplane and the Grateful Dead.

A 21-year-old Berkeley dropout, Wenner thought the emerging scene deserved a magazine that took it seriously.

And how much practical experience did he have running a magazine? "None," he said. "My experience had been in the editorial side only. In a practical sense of how to get it out and distribute it, I had no experience whatsoever."

He raised funds from family and friends: "Borrowed $7,500. My mom, my mother-in-law, my stepmother, friend of mine at Berkeley, and Ralph Gleason."

The magazine had some shaky moments in those early years: "My partner Ralph Gleason said, and it's true to this day, 'The proof of how good an idea Rolling Stone is, is it's survived Jann's management of it.'"

But Wenner put together a roster of irreverent writers, like Hunter S. Thompson and Tom Wolfe, and gave photographer Annie Leibovitz her big break.

There were other music magazines out there, but while they did not survive, Rolling Stone did. "We were just better, honestly," Wenner said.

But they didn't always get it right. In 1969 Rolling Stone called side two of The Beatles' "Abbey Road" "a disaster."  The first track? "Here Comes the Sun."

In a 2012 "Sunday Morning" interview, the band were still smarting. John Paul Jones told Mason then, "I read the first Rolling Stone review and said, 'Did they mean us?'

"I think it just went over their heads," Jimmy Page said. "Absolutely was way beyond them."

But Wenner was determined to "mainstream" the counterculture. In 1971 John Lennon granted Wenner an interview. It was "huge," he said. "And he kind of announced the breakup of The Beatles in it."

Lennon insisted the interview be published only in the magazine. But Wenner went ahead and released it as a book. The Beatle felt betrayed: "And that caused a falling-out for a while," Wenner said.

"Were you hurt that he was angry with you?"

"I felt bad. I felt he had every right to be angry."

"But you also felt you had a right to publish the book?"

"We did have a right to publish the book, yeah."

Lennon never spoke to Wenner directly again. Still, in 1980, on the eve of the release of "Double Fantasy," he gave what turned out to be his last interview to Rolling Stone the weekend before he was shot.

Annie Leibovitz took the cover photograph of John and Yoko. "We had no headlines on it; it was just the logo and the picture itself," Wenner said. "There was nothing more to say."

For rock stars and celebrities, appearing on the cover of Rolling Stone became such a status symbol, it inspired a song by Dr. Hook & the Medicine Show:

But a new book contends Wenner was obsessed with celebrity. In "Sticky Fingers: The Life and Times of Jann Wenner and Rolling Stone Magazine," author Joe Hagan writes:  "The framework of American narcissism has its roots in Wenner's pioneering magazine making."

He also chronicles the married editor's gay affairs, cocaine use and frequent feuds.

Mason asked, "Do you not like the picture of you in that book?"

Wenner, who cooperated with the author, pulled his support after he read the manuscript: "It's a nasty, negative portrait. It's tawdry. It doesn't deal with what the joy of what we did was, you know, and how important it was. And it just tries to make the whole thing seem like a cynical attempt at marketing and making money in a generation.

"And, yeah, the guy compares me to Donald Trump. Says I share responsibility with Donald Trump for the 'Age of Celebrity.' I think it's bulls**t."

As print struggles in the digital age, Rolling Stone has struggled to stay relevant. It's produced some celebrated journalism, like the 2009 article in which Matt Taibbi called Goldman Sachs "a great vampire squid wrapped around the face of humanity."

But the magazine was forced to retract a 2014 story about gang rape at the University of Virginia, that led to three libel suits.
Mason asked, "How much did UVA hurt the magazine?"

"It hurt a little," Wenner replied.

"Yeah. It was hurtful. I say a little because it doesn't fundamentally deter me from the 50 years of journalism we did, that this one incident that sometimes will just happen."

"You don't think there's anything you could have done --"

"We could have been more rigorous, you know? I mean, I think that the people who were in charge of this at the time, you know, let certain standards slide. Were it not for this one woman who fabricated -- that was golden, that was a great story. Not that that matters at this point."

At 71, Wenner still holds the titles of editor and publisher, but he's handed over day-to-day operations of the magazine to his 27-year-old son, Gus, who drew up the sale plans.

"How hard was it for you to reach the decision to put the magazine up for sale?" Mason asked.

"Not that hard," Wenner said. "I accept the inevitability of it."

"It's not that I'm leaving it. I intend to stay with it for a while longer."

"You're hoping to continue to be involved even after it's sold?"

"I could be happy, but I don't … see that happening. I think that if you wanna buy this and be a partner of this place, I think you want me."