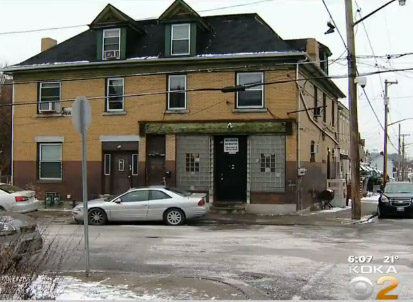 PITTSBURGH --Police say a Pittsburgh woman was shot and killed outside a bar early Friday by a man whose sexual advances she had refused.

Charles McKinney, 41, has been charged with murder in the death of 29-year-old Janese Talton Jackson. McKinney is also facing a slew of other charges after allegedly fleeing the crime and leading police on a high-speed chase through the city before his arrest. CBS Pittsburgh reports Jackson is the sister of Pennsylvania state Rep. Ed Gainey.

Gainey's office couldn't confirm that to 48 Hours' Crimesider. A lawyer for McKinney told Crimesider that he "emphatically" denies the charges and that he maintains Jackson's death was the result of an accidental gun discharge.

According to charging documents, a friend who was with Jackson at the bar just before the 2 a.m. slaying told police McKinney - who the friend knew - came up to Jackson and asked her if she knew where he could get marijuana, to which she replied "No." He then started talking to people close by Jackson, the documents say.

A bar employee who knows both McKinney and Jackson told police he later saw Jackson walking out the door. He said McKinney followed her out and "positioned himself against her backside in a sexual manner."

The employee said Jackson pushed McKinney slightly away and told him to "chill," according to the documents. He told police he watched through a window as both Jackson and McKinney walked across the street, and he said he saw McKinney approach her again in the same way. Jackson again rejected his advances, the employee told police, by pushing him slightly away. The employee then saw a "flash" coming from McKinney's hip area and he saw Jackson fall to the ground, according to the documents.

The employee yelled to Jackson's friend, who had also left the bar and was texting in a car nearby, "He [expletive] shot Nessey, call 911."

The friend tried to help Jackson, who was still breathing. The friend rolled the woman onto her side and consoled her until she died, the documents say. A medical examiner later ruled her death a homicide and found she died from a gunshot wound to the chest.

Just before 2 a.m. when officers responded to the report of the shooting, nearby officers pulled over a silver sedan they say MicKinney was driving at a high rate of speed. Two officers approached the car with their guns drawn, according to the documents, and ordered the man to show his hands and get out of the car. At the same time, they received a transmission from a dispatcher about Jackson's shooting. When McKinney overheard the transmission, police say, he drove off quickly in the car.

Police gave chase. They say McKinney struck a tree and came to a stop, and the officers again approached the car with their guns drawn, ordering McKinney to come out. According to the documents, when one of the officers attempted to open the front passenger door, the vehicle backed up quickly, almost striking two other officers. McKinney fled again in the car, according to the documents, and officers fired at him.

After leading police on a high-speed chase through a residential neighborhood, police say McKinney crashed the car into two other vehicles. When officers arrested him, they say he had a gunshot wound to the right temple. The documents say police found a gun and stamp bags of heroin in the car.

Wendy Williams, a lawyer for McKinney, denies that McKinney shot Jackson after she denied a sexual advance and said he fled because he was in fear for his life. She said the two knew each other well from seeing each other at the neighborhood bar, and that a gun McKinney was carrying in his jacket accidentally discharged when the two hugged outside the bar.

He fled from the bar because someone came outside and opened fire and he was fearful he would be shot, Williams said. He fled from police in the car, she said, because officers opened fire on him.

McKinney is in the hospital with a deep graze wound to his head and another shooting injury to his hand, Williams said.

Along with the murder charge, he's facing charges including aggravated assault, reckless endangerment, drug possession, fleeing police, and possession of a firearm by a felon. The documents say he pleaded guilty to aggravated assault in a 2004 case.

The bar employee and the friend, who police aren't naming because they may testify, identified McKinney as the shooter, the documents say.