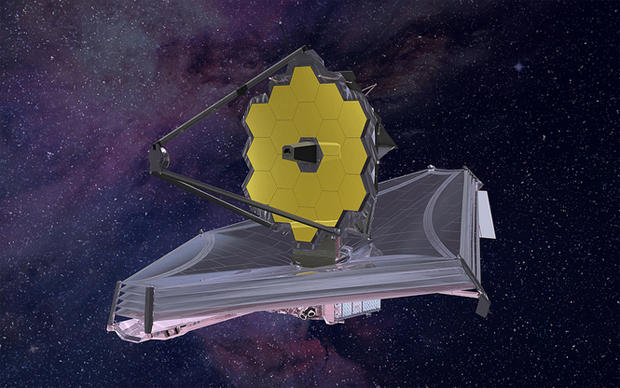 NASA's $8.8 billion James Webb Space Telescope has completed critical end-to-end testing in a giant vacuum chamber at the Johnson Space Center, proving the telescope will work properly in the deep cold of space, bring starlight to a sharp focus and precisely track its astronomical targets when launched in 2019, engineers said Wednesday.

"The successful completion of this test represents a very significant milestone for JWST," said Bill Ochs, the telescope's project manager at the Goddard Space Flight Center in Greenbelt, Md.

Scheduled for launch in the spring of 2019 aboard a European Ariane 5 rocket, the James Webb Space Telescope is the most sophisticated -- and expensive -- space observatory ever designed, featuring a 21.3-foot-wide primary mirror made up of 18 adjustable gold-coated segments that dwarfs the Hubble Space Telescope's 7.9-foot-wide mirror.

Optimized to capture infrared light, JWST will operate behind a complex five-layer sunshade the size of a tennis court that will passively cool the telescope's mirrors and science instruments to around 50 degrees above absolute zero -- minus 388 degrees Fahrenheit. One instrument is equipped with a helium refrigerator that will cool it to just 7 degrees above absolute zero, a mind-numbing minus 447 degrees Fahrenheit.

The ultra-low temperatures are required to enable the telescope to detect the faint infrared light emitted by the first stars and galaxies to form in the wake of the big bang birth of the universe nearly 14 billion years ago.

Unlike Hubble, which was launched into low-Earth orbit and could be repaired and serviced by spacewalking astronauts, the JWST is bound for a location known as a Lagrange point about one million miles from Earth. As such, it will be beyond the reach of NASA astronauts. It simply has to work.

Hubble, of course, was launched with a famously flawed mirror that prevented the telescope from bringing starlight to a sharp focus. The fault later was traced to an improperly set up test rig that fooled engineers checking the shape of the mirror.

Shuttle astronauts later were able to install instruments with corrective lenses that counteracted the mirror's spherical aberration. But that's not an option with JWST, and NASA is leaving no stone unturned to make sure Hubble's much more expensive big brother will work as advertised.

For its most significant test to date, JWST's optical assembly and instruments were shipped from Goddard to the Johnson Space Center in Houston last May and loaded into a huge vacuum chamber that originally was used to test Apollo moon ships.

"Chamber A," as it is known, was extensively modified to cool the telescope, in vacuum, to 40 degrees above absolute zero. It took a month or so to reach the target temperature and once there, the telescope endured another month in the simulated environment of space.

A team of more than 100 scientists, engineers and technicians worked around the clock, seven days a week, to maintain the proper temperature and pressure inside Chamber A while carrying out multiple procedures to verify the telescope's health.

Despite the impact of Hurricane Harvey, which flooded Houston in August, the testing continued without any major disruptions. On Sept. 27, engineers began warming up the chamber and JWST was hauled out on Dec. 1.

Mark Voyton, manager of the telescope's optical system and instrument module at Goddard, said simulated starlight was directed through the super-cold observatory, from the primary mirror to the instruments, in what amounted to an end-to-end test at cryogenic temperatures.

The results confirmed the mirrors remained properly aligned with the instruments and that the guidance system will work as needed to keep the telescope locked on target.

"The end-to-end test is the one thing that gives us confidence we will be able to make any adjustments to the mirror and its figure to deal with the thermal profile we'll see on orbit," Voyton said.

"The other aspect of our testing that is unique and different from Hubble is is that we were testing our (system) with test equipment that was not used to build the various pieces. So we have a completely independent test method apart from what was used to build it. And the combination of those two things gives us the confidence that we will avoid the kind of problem that occurred on Hubble."

Engineers are now carefully backing out of the test setup and preparing to put JWST's optics and instruments back in a custom transporter. From Johnson, a C5 transport jet will fly the telescope to Redondo Beach, Calif., where prime contractor Northrup Grumman will integrate the optics and instruments with the sunshade and the spacecraft control system, or bus.

The fully assembled telescope then will be subjected to acoustic and vibration testing before it is packed up again and shipped to French Guiana for launch. Ochs said the program has "a couple of months" of extra time, or reserves, left in the schedule to handle unexpected problems.

Humans will live on the moon "in this decade," NASA official says
More