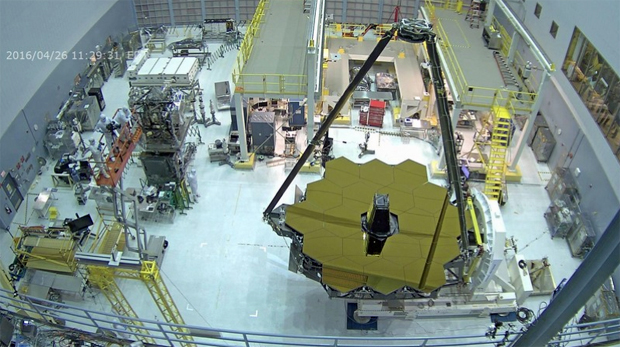 NASA's $8.8 billion James Webb Space Telescope, the long-delayed, much more powerful successor to the hugely successful Hubble, remains on track for launch atop a European Ariane 5 rocket in October 2018, the program director says, with seven-and-a-half months of schedule reserve remaining in the timeline to handle unexpected problems.

Inside a clean room at the Goddard Space Flight Center in Maryland, the optical elements of the observatory are virtually complete, with the 18 gold-coated hexagonal segments making up its 21.3-foot-wide (6.5-meter-wide) primary mirror now in place, along with a 2.4-foot (0.74 meter) secondary mirror at the apex of a folding tripod.

With the secondary deployed, the James Webb actually looks like a telescope, and its sheer size -- the segmented primary dwarfs Hubble's one-piece 7.9-foot (2.4-meter) mirror -- hints at the enormous power it will bring to bear once operating high above Earth's obscuring atmosphere.

Optimized to collect infrared light, JWST is expected to give astronomers a glimpse of the first generation of stars and galaxies to form in the wake of the big bang 13.8 billion years ago. Unlike Hubble, which was launched into low-Earth orbit by a space shuttle and periodically serviced by spacewalking astronauts, the JWST will be boosted to a location known as the sun-Earth Lagrange point No. 2 -- L2 -- about one million miles from Earth.

Once in space, the telescope will unfold like a huge mechanical origami. Two panels of mirror segments will deploy to form the full-diameter primary, along with the mast supporting the secondary. Radiator panels will rotate into place, its main antenna will deploy and a giant five-layer sunshield the size of a tennis court will open and stretch into position to shade the optical system, helping keep it at an operating temperature of just 50 degrees above absolute zero.

Unlike the Hubble, the JWST will be completely on its own once launched, and all of its complex systems must work as designed right out of the box. And as one might expect, building a space telescope of such power and complexity is extraordinarily challenging. And extraordinarily expensive.

First proposed in 1995, the Next Generation Space Telescope, as it was then known, featured a 4-meter (13-foot) mirror and systems optimized for a relatively narrow infrared bandwidth. Rough estimates put the cost of the proposed observatory between $500 million and $1 billion. Northrup Grumman was named prime contractor in 2002 and as the design matured and capabilities grew, the projected cost climbed to $2.5 billion with launch expected around 2010.

By 2005, the launch date had slipped two years and the project's life-cycle costs had climbed another $2 billion to $4.5 billion. Three years after that, a program review put the cost at $5 billion and estimated launch in 2014.

Finally, in 2010, Congress ordered an independent review, which concluded the JWST program had been poorly managed by NASA and would cost at least $6.5 billion. NASA conducted an extensive replanning exercise and reported to Congress in 2011 that JWST would cost $8.8 billion and that launch would slip to 2018.

"When we constructed the replan in late 2010, early 2011, we decided this is how long we're going to need to get to launch, and that was October of '18," said Eric Smith, the JWST program scientist who took over as program director last year. "When we came out of the replan, there were 13 months of schedule reserve. We've been using that up and so now we're at seven-and-a-half months. ... We're more or less where we planned to be."

Translation: the program remains on track and within the current budget for a launch in October 2018. But with the program moving into the home stretch, good results from upcoming tests will be critical to staying on course.

As with more traditional telescopes, JWST's secondary mirror will send concentrated light back down to the center of the primary where the aft optical assembly protrudes, housing a fixed tertiary mirror that will bounce starlight back up to a small "steering" mirror. The steerable mirror will, in turn, send the light back down into the Integrated Science Instrument Module, or ISIM, housing the telescope's four science instruments.

The fine steering mirror "can move very quickly to compensate for telescope motions or, if you wanted to move your field of view very slightly, a pixel or two, you don't have to body point the whole telescope, you can just move that fine steering mirror a little bit to move the image on your detectors," Smith explained.

The ISIM and its instruments recently completed their own integrated testing, clearing the way for attachment to the back of the primary mirror support structure.

Once the ISIM is in place, engineers will carry out a "center-of-curvature" test to precisely measure the mirror segment alignment and spacing before folding the entire optical assembly into its launch configuration. It then will be moved out of the Goddard clean room and into a special "clean tent" for extensive vibration and acoustic tests simulating the environment it will experience atop the Ariane 5 during launch.

"So after it gets through acoustic and vibration testing at Goddard, then it goes back into the clean room and they do that same center-of-curvature measurement just to make sure it passed its environmental testing," Smith said. "So that second center-of-curvature test will occur in late fall."

Then, toward the end of the year, the optical assembly will be shipped to the Johnson Space Center in Houston for end-to-end testing to make sure the telescope can bring starlight to the required focus. The work will be carried out in a giant thermal vacuum chamber originally built to test Apollo moonships.

"This is a test that we knew we needed to have in the program because it looks at the optical path from an external source, down through the telescope into the instruments, in a completely independent arrangement from the arrangement that was used to build the optics," Smith said. "And of course, that was what caused the Hubble problem when it was tested on the same fixture that was used to make it and that fixture itself was in error."

Smith was referring to the infamous test rig oversight that resulted in Hubble's initially blurry vision due to spherical aberration.

In the JSC vacuum chamber, JWST's optical assembly, with its mirror segments and secondary deployed, will be mounted in a cradle-like fixture, known as the "hard-point off-loader suspension system," attached to the ceiling by six rods. Once the telescope is in place, the chamber will be sealed, pumped down to vacuum and chilled.

"So the thing is floating there, and they place a source plate on top of this aft optics system, that black structure that sticks up in the middle (of the primary), and it has little light sources in it, some that point down into the instruments and others that point up," Smith said, describing the test setup.

"So they can fire light directly into the instruments, they can fire light up off the secondary down onto the primary, up to flat mirrors that are suspended above the telescope and then that light comes back down and goes through the whole optical system. So there are numerous optical tests and ways of testing to make sure the alignment is correct between the instruments and the telescope."

Engineers also will make sure the mirror alignment can be precisely adjusted as needed. Each primary segment is equipped with tip-tilt actuators that can adjust a segment's orientation and a central actuator that can change the curvature of the surface as needed.

"As you move the observatory around, the sun hits the sunshield in a slightly different way each time and that can cause slight temperature changes, which will cause figure changes (in the mirrors)," Smith said. "We anticipate that those changes are gradual enough and slow enough that we only need to do adjustments maybe once a week."

Working around the clock over several months, engineers will precisely measure how much light is concentrated into a point, or focused, while interferometers measure how precisely the mirror segments can "phase up," or "how close can they get the wave fronts coming off each different segment, things like that."

Assuming no major problems crop up, the telescope assembly will be shipped to Northrup Grumman in Los Angeles for integration with the spacecraft bus.

"The whole time the telescope is finishing its assembly and getting ready for testing, the spacecraft bus and sunshield will be being assembled and built out at Northrup Grumman," Smith said. "And it's there in '17 that these two big pieces will come together and they'll have to be integrated."

In California, engineers will carry out tests "to make sure the observatory deploys as predicted, the sunshield, the telescope opening up. But at that stage, the whole observatory is now so large there is no thermal vacuum chamber in the world that we can use to do a complete optical end to end test of the whole system. At that point, we'll just have to rely on the fact that we've tested the signal through the spacecraft."

The five-layer sunshield, folded and rolled up to fit in the Ariane 5 payload fairing, must unfold, unroll and stretch tight once in space to insulate the telescope's optical elements and instruments from the warmth of the distant sun, critical to JWST's ability to capture faint infrared light from the depths of space and time.

The sunshield is made up of five thin layers of Kapton coated with aluminum and electrically conductive "doped" silicon to reflect as much heat as possible. The deployment mechanism is complex, and Smith said the sun shade is now the pacing item on the timeline.

"For me, the technology you've never really flown before is always going to be your riskiest one," Smith said. "Early on, that was the construction of the telescope and the instruments. But we've retired those risks now. The spacecraft bus is maybe a little bigger than many spacecraft buses, but it's filled with the same things -- gyroscopes, reaction wheels, batteries that are in other missions -- that's not a long pole.

"For me, it's the final development and integration of the sunshield, just because it's new and we haven't finished it yet. That's one thing we keep our eye pretty closely on."

Editor's Note: A version of this story first appeared in Astronomy Now magazine.

Humans will live on the moon "in this decade," NASA official says
More
William Harwood