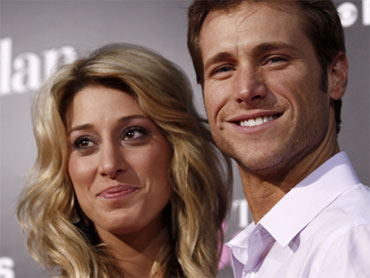 She said he wasn't intimate. He said she wasn't faithful. She called him a fame whore. He called her jealous. For weeks, the nasty break-up of "The Bachelor" couple Jake Pavelka and Vienna Girardi has been fought in the tabloids. In their latest round of sparring, the pair were back in front of the reality TV cameras where it all began.

"Unfortunately, that's what one of our arguments looks like," Pavelka said after a weeping Girardi stomped away from their pre-taped reunion at the end of Monday's episode of "The Bachelorette" starring Ali Fedotowsky, the former Facebook advertising account manager who chose her job over Pavelka during his "Bachelor" season. "It's kind of embarrassing."

"The Bachelor" host Chris Harrison moderated the pool-side debate between the couple, who called off their engagement last month. The 32-year-old pilot from Dallas and the 23-year-old Geneva, Fla., resident quarreled over such issues as where they should place furniture in their home and why she gave an interview to a tabloid about their split.

Normally, when the couples who meet on "The Bachelor" or "The Bachelorette" end their made-on-TV relationships - just three out of 19 are still together - their publicists release a statement announcing an amicable parting before they quietly fade back into obscurity. Pavelka and Girardi, however, quickly launched into public mudslinging after ending their romance.

Girardi lashed out first by appearing on the cover of Star magazine alongside the headline "Jake's a MONSTER!" Pavelka then struck back on the front of People magazine above the headline "I DON'T TRUST HER." Girardi later dodged infidelity allegations on Twitter, while Pavelka unloaded about his relationship regrets in an interview with "Extra" host Mario Lopez.

"Nobody likes airing out their grief in public," said D. Ivan Young, author of relationship guide "Break Up, Don't Break Down." "When you find people putting behavior like that out there, they are people who are more concerned about the integrity of their brand rather than the content of their character. Those relationships are superficial at best."

The tumultuous separation and subsequent speculation - Is Jake getting back together with Ali? Is Vienna going to pose for Playboy? Is Jake gay? - has remained a hot topic in the tabloids and online. Irad Eyal, reality TV producer and author of celebrity relationship guide "Sex Degrees of Separation," said the duo's messy end is atypical Hollywood behavior.

"They really went off the rails," said Eyal. "I think it became this game of who could bad mouth each other worse and then see who could come out cleaner. Obviously, it's a better way to keep your name in the press. If you just fade out quietly like all the other couples from 'The Bachelor' and 'The Bachelorette' did in the past, you're left with nothing."

Eyal said that unlike A-list film stars, who work hard to protect their public personas, reality TV stars require a constant barrage of drama in their personal lives to keep their 15 minutes of fame ticking. He likened "The Bachelor" divide to the disorderly divorce of Jon and Kate Gosselin, who starred with their children on TLC's "Jon & Kate Plus 8."

When it comes to discussing their dissolved romances in the press, most celebrities keep their traps shut - except when they promise to "remain good friends" with their exes. Silence isn't necessarily always golden though, according to image consultant LisaMarie Luccioni, who specializes in managing the public impressions of companies and individuals.

"Silence communicates," said Luccioni. "It can be decoded in a positive way. For example, with the Sandra Bullock situation, we didn't really hear a lot from her, and people decided that it meant she's taking the high road, but contrast that with Tiger Woods, who stayed quiet as that story kept building, and it was seen as if he was hiding something else."

Monday's reunion likely won't be the last time viewers see Girardi and Pavelka in the spotlight. Girardi said she got a job in Los Angeles, and Pavelka has filmed a guest spot for Lifetime's legal drama "Drop Dead Diva." Beyond that, maybe they could try looking for love again on another season of "The Bachelor." Casting for the 15th edition is currently under way.