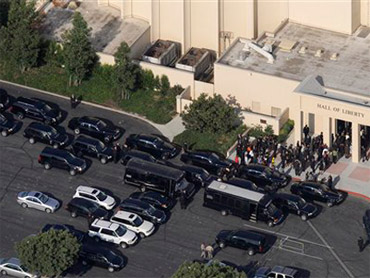 Michael Jackson's family and close friends gathered for a private funeral service Tuesday, shortly before the late pop icon's public memorial was set to kick off in Los Angeles.

Jackson's family members and dozens of friends, led by his parents, Joe and Katherine, were seen walking into a hall at Forest Lawn Cemetery, which is no stranger to celebrity burials, where a small viewing was apparently held the night before.

The family emerged around 30 minutes later, along with Jackson's casket, which was loaded into the back of a hearse as the motorcade prepared to head to the Staples Center in downtown Los Angeles. Jackson's body will be present at the public memorial.

Before the service, numerous vehicles under California Highway Patrol escort headed out from the parents' home around 8 a.m. and reached the cemetery about 15 minutes later.

Authorities shut down sections of freeways during the height of Los Angeles' morning rush hour to allow the motorcade to pass.

The addition of the body adds to the spectacle currently gripping downtown Los Angeles. Police blocked off roads and warned those without tickets to stay away because they would not be able to get close to the Staples Center.

(AP / CBS)
Some fans were allowed past street barriers into the immediate area around the Staples Center early Tuesday. Dozens of street vendors lined up selling T-shirts, photos, buttons and other Jackson memorabilia.

More than 1.6 million people registered for free tickets to Jackson's downtown memorial. A total of 8,750 people were chosen to receive two tickets each.

Bratton said Tuesday on CBS' "The Early Show" the department would have more officers on the streets of downtown for the memorial service than it had for last month's Lakers victory parade.

A few dozen people, some wearing the gold wristband that will allow them into the memorial service, gathered early Tuesday at the perimeter set up outside the Staples Center.

"They're touching us and saying, 'Can you bring the love in for us?'" said Mishelle Van, 37, who said she drove from Hesperia to spend the early morning hours meeting other Jackson fans.

Los Angeles was the epicenter of Jackson-mania, but the outpouring of emotion was worldwide. Belgium's two national public broadcasters were to broadcast the memorial live later Tuesday and several hundred Jackson fans gathered at a Hong Kong mall late Tuesday.

In America, about 50 movie theaters across the country, from Los Angeles to Topeka, Kansas, to Washington, D.C., were planning to broadcast the memorial live, for free. Jackson died at age 50 on June 25.

"There are certain people in our popular culture that just capture people's imaginations. And in death, they become even larger," President Barack Obama told CBS News while in Moscow. "Now, I have to admit that it's also fed by a 24/7 media that is insatiable."