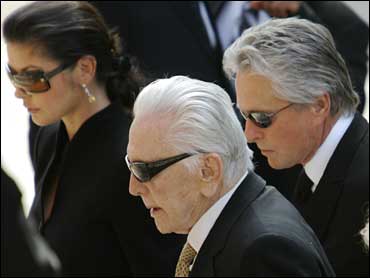 The stars of Hollywood and Washington came out Tuesday to pay their respects to Jack Valenti, a man at home in the power structures of both cities.

Five days after his death at 85, friends and family members honored Valenti at the Cathedral of Saint Matthew the Apostle, just a few blocks from the White House where he served as assistant to President Lyndon Johnson. Later, as chief of the Motion Picture Association of America, Valenti was a passionate film industry lobbyist, deflecting criticism of Hollywood and fiercely combating threats to the industry such as film piracy.

Actor Kirk Douglas recalled for his fellow mourners a time he spent with Valenti after a long, frustrating wait for a Washington meeting. Valenti told him to abandon his post and come over to the White House.

"If you were Jack's friend, your troubles became his troubles," Douglas said. "When the time comes for me to be upstairs waiting for St. Peter to see me, I expect Jack to find me and bring me to the big man."

Describing his final visit with Valenti, Douglas said: "He was in a coma. I held his hand and talked to him."

Among the other attendees were actors Michael Douglas and Catherine Zeta Jones and director Steven Spielberg.

In his eulogy, Charles Bartlett — a Valenti friend and Washington neighbor — spoke to the dual nature of Valenti's career, saying he flew from coast to coast in an attempt to balance popular culture and public favor — serving, in effect, two masters.

The political side of the spectrum was represented by Nancy Pelosi, the Democratic leader of the House of Representatives, House Majority Leader Steny Hoyer, and Sens. Patrick Leahy, Dianne Feinstein, and John Kerry, among others.