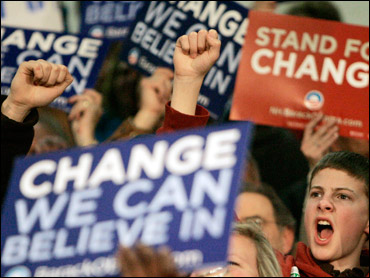 For all the breast-beating and soul-searching being performed by the political elite over why we so badly blew predicting Hillary Clinton's New Hampshire resurrection, we actually blew something much bigger: understanding the central dynamic of the presidential election.

Barack Obama cornered the market on change. After Iowa, John Edwards wanted to get some market share as did Mitt Romney, Mike Huckabee and John McCain. Hillary stuck with experience. Contrarian pundits mocked Obama for pushing change without beef, unfairly.

The sorry truth is that "change" was merely a phantom conjured by the political elite - a nano-trend, a shorthand, a figment, a wild goose chase.

In 2008, there have been four elections with four winners: Obama, Clinton, Huckabee and McCain. Go ahead: pick an uber-theme that fits all these winners. It ain't change.

Sure, Obama talks a lot about change and he had a big win. But he also talks about hope, leadership, health care and opportunity. And he also lost New Hampshire.

It was the Iowa exit polls that gave change mega-buzz. Among Democratic primary voters, the most coveted quality in a candidate was the capacity "bring about needed change." A whopping 52 percent want change. In New Hampshire, it was the same but more so, with 54 percent opting for change in their multiple choice selections.

Well, use some common sense here. The quality that a candidate "can bring about needed change" can mean he/she will get out of Iraq to one voter. It can mean universal health care to another. Or cleaning up campaign finance, invading Iran, curing cancer or restoring the American Way.

In this context change is just a Rorschach test, not a political diagnosis. It is nearly meaningless.

This has happened before, often. After Bush's re-election in 2004, for example, it became instant conventional wisdom that "moral values" were the key to all politics. Strategists and commentators nagged the Democrats for not having good "moral values." Republicans knew how to talk about "moral values" so they won.

It turned out that "moral values" were completely in the eye of the beholding exit poll answerer, just like "change" this year. Moral values didn't equate with family values or Christian values. Lo and behold, moral values played absolutely no role in the 2006 mid-term elections that toppled the Republicans from control of Congress.

It would be very smart to get rid of the bogus change theme early in this election year before it perpetrates more muddy thinking.

The focus on a false "change" story, obviously, obscures deeper truths. Obviously, the victories of Obama, McCain and, to a slightly lesser degree, Huckabee, show that business-as-usual isn't attractive to many voters and they are looking for a new cast of characters - and a new kind of character. But this isn't a mega-trend, as Clinton's win shows.

The dynamic to watch this year involves independent and swing voters, those creatures that we were told were extinct in hyper-polarized, red/blue politics in America. So far, 2008 has been the year of the independent voter.

"We were told that there was no longer any middle - swing voters had disappeared," said Stanford political scientist Morris Fiorina, author of "Culture War? The Myth of a Polarized America."

Fiorina's point is that independent, swing voters never went away, they just had only highly partisan candidates to choose from. Unhappy with such choices, their votes were evenly divided between two bad options. This resulted in close elections. Analysts mistakenly said this meant America was polarized. It wasn't. Politicians, activists and candidates were partisan and polarized. Most voters were not. They were pragmatic and open-minded.

These voters are looking for a home in 2008 and they actually have some interesting options. Sure, they want "change" from politicians they don't like, who doesn't? The deeper theme is that perhaps the myth of polarization is losing steam. A few candidates are doing what all candidates used to do in the days before culture war and wedge issues: running for the middle where most voters live.

Obama and McCain are appealing to independents. They are trying to use a style and vocabulary that isn't knee-jerk partisan, that doesn't demonize all opponents and that isn't full of coded messages to the parties' interest groups. It is a style of campaigning the country hasn't seen for awhile. It may not prevail. So far, anti-polarizing campaigns have won two of four primaries.

The "change" narrative deserves an early funeral. But independent voters, the real silent minority, might commit some real political change this year.