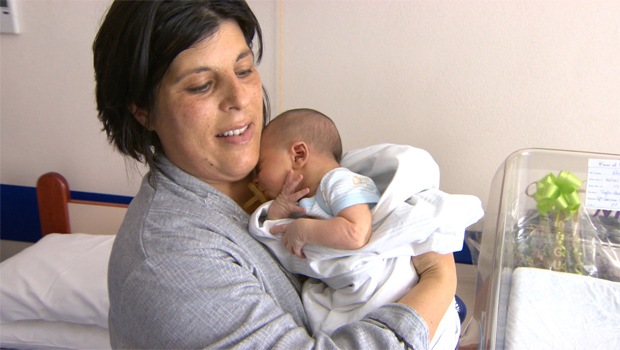 Just in time for Mother's Day, a new report finds the average number of children American women have in their lifetime is remaining fairly steady, at roughly two -- hardly enough to outweigh the birth dearth much of the rest of the world is experiencing. Our Cover Story is reported by Elizabeth Palmer:

The feast day of St. Efisio is a celebration of his main miracle in the 17th century, when he banished the plague from Sardinia.

It's also a glimpse of the past, when each village -- defined by its customs and its costumes -- was dominated by huge, tightly-knit families, generation after generation.

Families that were exuberant, extended -- and these days, all but extinct.

In an empty delivery room at the Villa Elena clinic, here's the new reality: the midwife, Giulia Tesio, told Palmer the number of babies she's delivered annually has dropped by 70 percent.

Babies, like tiny Reuben, are increasingly rare in Italy. In fact the, official figures show that in 2014 there were fewer babies born in Italy than at any time since 1861.

Reuben's besotted Mom is Sabrina Fenu. A social worker, she had to work full time until she was 40 to afford a home and future for her son. "Italian women now wait," she said, "until we're financially stable. Then we have just one child. We'd like to have more, but the conditions just aren't good enough."

Of course, in the old days, before birth control, conditions weren't that good, either. Women often had to bring up lots of children with little money.

"Nowadays people don't want to raise their child in poverty," Francesca said. "They want a good level, a good standard of life for their kids."

That's true across most of the developed world. The birth rate in North America, Russia and Europe is already below the replacement rate of about two children per couple. And in Italy, a quarter of all women have no children at all.

That's partly the fault of a system that gives women no support, says professor Elizabeth Addis, an expert in demographics and social policy. More than 50 percent of Italian women work outside the home, and yet there's no affordable day care here, no school meals, and no after-school programs.

"In Italy, this virtuous process of building public services to help women, and to substitute for women's traditional work, didn't happen," Addis said.

"A lot of Italian women are trapped," said Palmer.

Addis' own teenage daughter, Katherine, is still living at home, but she's heading off to college soon, with plans for a career -- and a life that doesn't include children.

"There's always a dual obligation of women, both towards their family and their job," she said. "It has always been and will always be a hard balance, and I honestly don't want that."

In a quiet valley near the historic town of Iglesias, Luciano and Adriana Otteli live in what was once a thriving mining region, but the industry has all gone now -- along with the big families who used to make a living from it.

The photos in Luciano and Adriana's albums trace the collapse of Italy's birth rate. Adriana's grandmother got married when she was 17. Of her ten children, seven were still alive when their family portrait was taken; Luciano was one of six, seen in the summer of 1957 with their dad.

Adriana and Luciano ended up having two kids. She was a teacher who wanted to keep working: "So I had a boy and a girl. I was satisfied with that."

And as for the next generation: One little boy named Stefano, who lives downstairs with Luciano and Adriana's daughter, Maria Rita, and her husband.

Palmer asked, "Would you have liked ideally to have had a bigger family?"

"Not big," said Maria. "Two or three, and stop." But at age 43, with work scarce in Italy's stalled economy, she's accepted that Sefano will be an only child -- part of a whole generation of young people whose taxes, when they join the work force, will have to pay not only for their parents' retirement, but probably their grandparents', too.

It's a crunch that threatens everyone's standard of living. Reversing the trend will depend partly on a better economy, and more help for working mothers.

And, controversially, it also means welcoming more foreign migrants, including those smuggled into Italian waters every day, and who will join Italy's immigrant community, with its economic ambitions and higher birth rate.

Conservatives fear those changes will dilute the traditions of a great culture, but the alternative is a weakened Italy out of step with the modern world.