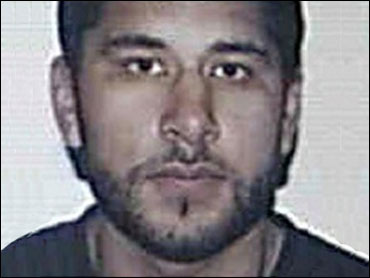 Italy's interior minister said one of the suspected bombers in last week's failed attacks in London has been caught in Rome.

The official said police picked up Osman Hussain in an ongoing operation.

The Somali-born Hussain is a naturalized British citizen.

Earlier Friday, heavily armed police wearing gas masks and reportedly using stun grenades raided two west London apartment blocks Friday, and they said they made a number of arrests in their search for suspects in the failed July 21 transit bombings.

Police say three people connected to the failed July 21 bombings have been arrested in west London. That would bring the number of arrests of men tied to the July 21 attacks to about two dozen. Another suspect was arrested in Birmingham on Wednesday.

CBS' Charlie D'Agata reports that in one of the raids, three men were seen walking away from the building, two in light blue forensic suits. A shorter man between them was in a white forensic suit, presumably the suspect.

Police were involved in a standoff with at least one man in an apartment, pointing assault weapons and pistols at the home, a witness said. Police wearing black balaclavas and body armor surrounded the building.

One witness described the scene as police yelling "Leave the flat! They're asking him to leave the flat, fully undressed or in his underwear."

A witness told The Associated Press that a man wearing what appeared to be a bus driver's uniform being led out in handcuffs.

The police operation was carried out in at least two locations in Notting Hill about a quarter-mile apart.

Armed police also arrested two women at Liverpool Street station, located in the central London, and evacuated the area. The women were pinned to the ground in a raid.

One woman is thought to have been in a line for the Stansted Express, which goes to one of London's airports, when she was pushed to the ground by police.

British Transport Police said the operation was carried out by the Metropolitan Police and the site was being searched. Both the train station and the subway station were evacuated.

"The two women were arrested at around 1:54 p.m. and the station is now closed, the Tube is passing through on a nonstop basis," a BRT spokesman said on condition of anonymity in accordance with British practice. "Police are now looking at a number of suspect packages and searching the station."

One of the four men suspected of carrying out the July 21 attacks on London's Tube and a bus was arrested in Birmingham, central England, on Wednesday. Yasin Hassan Omar, 24, was being questioned at a top-security police station in London.

Two weeks before the failed July 21 attacks, attacks on three other subway lines and another bus killed 56 people, including four suicide bombers.

Meanwhile, a police watchdog group investigated the killing of a Brazilian electrician, who was shot to death by officers who believed he was a suicide bomber.

Investigators from the Independent Police Complaints Commission appealed for witnesses who were at Stockwell subway station in south London where Jean Charles de Menezes, 27, was shot eight times — seven times to the head on July 22.

Menezes' funeral is being held Friday in Gonzaga, Brazil, where he was born. Cardinal Cormac Murphy-O'Connor, the leader of the Roman Catholic Church in England and Wales will attend a Mass for Menezes at Westminster Cathedral in central London Friday evening.

One of the Tube stations closed after the July 7 attacks reopened Friday. Several bouquets of flowers lay at the entrance to the Edgware Road station in a tribute to the seven people killed there. But passenger numbers were visibly down — a sign of nervousness among Londoners despite a huge police operation to catch the terrorists.

"I felt a bit nervous coming through the tunnel just then and this morning my mum gave me a look as though she was never going to see me again," said commuter Jasmine Chandhoke, 22. "Everyone was being incredibly vigilant on the train, checking each other's bags."

Scotland Yard police headquarters declined to comment on the arrest in Zambia of a British man sought in connection with the July 7 bombings.

British investigators reportedly believe Haroon Rashid Aswat, 31, had been in telephone contact with some of the four suicide attackers who carried out the July 7 attacks.

The British Foreign Office said it was seeking access to a Briton reportedly detained in Zambia but would not identify him.

In Britain, police have 20 people in custody in connection with the July 21 attacks, and as part of what Commissioner Blair has described as "the largest investigation the Met (Metropolitan police) has ever mounted."

Omar is a Somali citizen with British residency suspected of carrying out the failed attack at the Warren Street subway station. He was being questioned at a high security police station in London.

He was arrested Wednesday in a dramatic raid in Birmingham when anti-terrorist officers subdued him with a stun gun.