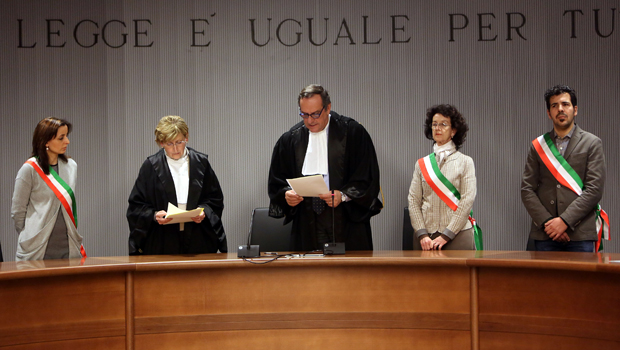 CHICAGO - The Italian judge who declared Amanda Knox and Raffaele Sollecito guilty of the brutal murder of Meredith Kercher is now, himself, being investigated for ethical violations related to the trial. Even if Judge Alessandro Nencini were disciplined and lost his position on the Florence bench, he should have no future career worries. Judge Nencini's recent, public statements about the Kercher case show the justice has a big leg up on becoming a writer of fantastical fiction.

Last week, when Knox and Sollecito were convicted of the 2007 Kercher murder, it was the duo's third trial on the same charges since 2009. They are batting one for three in those trials; one acquittal and two guilty verdicts. Judge Nencini delivered last Thursday's guilty verdict sentencing Knox to 28-and-a-half years in prison and Sollecito to 25 years behind bars.
Following the Kercher verdict, four members of Italy's center-right political party, Forza Italia, formally called into question Judge Nencini's ability to be unbiased. The four - Nicolo Zanon, Alberto Albertoni, Filiberto Palumbo, Bartolomeo Romano - have asked a judicial oversight body to investigate "a serious lack of impartiality" by Nencini in the Kercher case.
One Italian publication described "clouds are gathering" over Nencini. The most serious lightning bolt in those "clouds" could be Italy's Justice Minister Annamaria Cancellieri. She has begun a preliminary inquiry into Judge Nencini's behavior in the Kercher case vis-à-vis Italy's code of ethics. It has left, what one Italian commentator calls, "a sinister picture of the Italian justice system."
Judge Nencini's situation isn't helped by the fact the European Court of Human Rights in Strasbourg, France has raised questions about the impartiality of Italian justices, in general. Being a member of the European Union, Italy has ceded final authority over its judicial proceedings to the Court of Human Rights. It can throw out any Italian judge's ruling.
So what did Judge Nencini do that got him in so much hot water?
For one thing, he broke character. By his own estimate, the Judge had not given an interview to the media in 30 years. But the tumult following the Kercher verdict shattered Nencini's silence. The judge spoke to a few newspaper reporters about the case. It's complicated, but the Italian judicial code of ethics essentially prohibits comment from the bench in the days and weeks following a verdict.
But that rule seems way inside Italian baseball to anybody not living in Italy. For many others, what was shocking about Judge Nencini was not only what he said but also what he revealed about his thinking in the Kercher trial.
One thing the trials of Amanda Knox and Raffaele Sollecito have always lacked is a verifiable motive for the murder of Knox's British roommate. So police and prosecutors have thrown handfuls of motives against various courtroom walls in the hopes that one sticks. It has become a prosecutor's user manual for creative but baseless arguments. So the past motives for the crime are: it was a sex-game gone bad; it was a ritual killing; it was a robbery; it was mean girls; it was because Amanda Knox is a "she-devil."
Quite unexpectedly, Judge Nencini has added yet another motive: a boys night out. Over the course of 30 meetings, Judge Nencini said that he and the jury had developed "a line of reasoning." Their "reasoning" is that Amanda Knox and Raffaele Sollecito "had nothing to do" the night of November 1, 2007 in Perugia. And the idea to kill Meredith Kercher, who was stabbed multiple times, "was born in an evening with the guys" according to Nencini. The Judge did tell the reporters that he was "aware" that this was "most controversial." Nencini also conceded he has no idea what actually happened the night Meredith Kercher was killed.
The sound you should be hearing is the Italian Justice Minister's lightning bolt, figuratively of course, striking Judge Nencini and restoring his common sense. But that isn't happening. So the wait is on to see what, if anything, happens to the Judge. And in the meantime, the trial of Amanda Knox and Raffealle Sollecito will continue to resemble Lewis Carroll's White Queen's approach to jurisprudence (Sentence first, verdict afterwards).
Judge Nencini has apologized for stepping out of line and speaking his mind to the media, saying, "My words have generated misunderstanding." So, too, has his thinking. Raffaele Sollecito's lawyers have asked a judicial oversight committee to consider whether the guilty verdict against their client should be thrown out.

Knox defense lawyer Carlo Dalla Vedova said in an emailed statement that the interviews by Nencini were "not appropriate," but he reserved comment on any action until the court's reasoning for the verdict is issued, expected within 90 days of the sentence. The American's defense team also is planning to appeal the verdict.