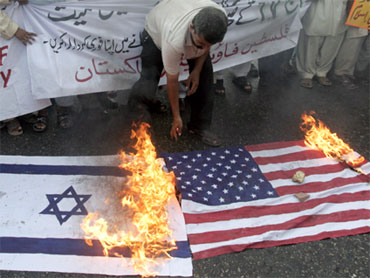 Israel's deadly commando raid on aid ships bound for Gaza confronts President Barack Obama with another major test by the Israeli leadership - and another blow to Washington's goal of brokering peace with the Palestinians and improving the U.S. image in the Arab world.

Depending on how the White House finally reacts, the bloody incident also could further confound once rock-solid relations between the United States and Turkey, where most of the nine dead were apparently from.

So far, Obama has only voiced "deep regret" over the Israeli raid, and the White House said he and Prime Minister Benjamin Netanyahu agreed by phone to reschedule Tuesday's White House talks "at the first opportunity." Netanyahu was rushing home from Canada.

The White House statement said the president "expressed the importance of learning all the facts and circumstances" surrounding the incident.

There were conflicting accounts of what happened early Monday, with activists claiming the Israelis opened fire without provocation and Israel insisting its forces fired in self defense.

The specifics, however, of exactly what happened once the commandos boarded the aid ships will remain in dispute for days or even weeks to come. The perceptions of the event are already fixed in much of the world, especially in Muslim countries.

Those perceptions are what count. They include:

•   The fact that Israel confronted the six-ship flotilla in international waters;

•   The convoy was intent on breaking Israel's three-year blockade of the Gaza Strip, imposed after the Palestinian militant group Hamas seized control of the tiny Mediterranean territory in 2007.

•   The blockade - along with Israel's fierce offensive against Gaza in the winter of 2008-2009 to stop Hamas rocket fire on Israeli villages - already had fueled anti-Israeli sentiment around the Arab world and in some quarters in Europe.

Compounding all that, the violence centered on the lead boat, the Turkish-flagged Mavi Marmara ferry.

Reaction was swift. There was a massive protest in Turkey, Israel's longtime Muslim ally, which unofficially supported the mission.

Prime Minister Recep Tayyip Erdogan accused Israel of "state terrorism," and the government recalled its ambassador and called off military exercises with the Jewish state.

The U.N. Security Council went into emergency session and called for an impartial investigation of the deadly Israeli commando raid. The Arab League planned to meet Tuesday in Cairo.

Mr. Obama took office declaring Israeli-Palestinian peace a top agenda item, demanding Israel stop construction of West Bank settlements and end expansion of Jewish neighborhoods in east Jerusalem, lands the Palestinians envision as a state of their own as part of a peace treaty.

Netanyahu said no and poured salt in that wound when his government later announced a major east Jerusalem project as Vice President Joe Biden was visiting to reassure Israel of U.S. support.

After a deep chill, President Obama said he recognized that neither side was ready for peace talks. Even so, Netanyahu and the Palestinians subsequently agreed to open indirect negotiations with U.S. special envoy George Mitchell.

The fate of that small move forward was uncertain.

Palestinian President Mahmoud Abbas denounced the ship raid as a "sinful massacre," but signaled he would keep going with the indirect talks. Abbas told senior officials of his Fatah movement and the Palestine Liberation Organization that there is no need to quit since the Palestinians are talking to the U.S. and not to Israel, according to his adviser Mohammed Ishtayeh.

Difficult U.S.-Turkish relations are bound to be seriously set back if Mr. Obama does not condemn the Israeli ship raid. That carries the possibility for major problems inside NATO, where Turkey is the only Muslim member. And it will further complicate U.S. efforts against the Iranian nuclear program.

Turkey had just reached an agreement to take Iranian enriched uranium in return for a smaller, more pure batch of nuclear fuel for Iran's research reactor that produces medical isotopes. The U.S., Russia and France had proposed the deal late last year, with Russia to serve as receiver of the Iranian fuel and France to provide the material for the research reactor. Iran said no to that proposal.

The day after the Iranian deal with Turkey, the U.S. announced it was moving ahead with harsher sanctions in the U.N. Washington was at pains to thank Turkey for its efforts, but declared them insufficient. Turkey is deeply opposed to sanctions on its eastern neighbor.

During the Cold War, Turkey served as an unquestioning NATO bastion on the Soviet Union's southern flank. But with the end of the superpower standoff, Turkey slowly began charting a more independent course - most visibly with its refusal to allow the U.S. to use its territory in the 2003 invasion of Iraq.

That, among many other difficulties, including American support for the Kurds in northern Iraq, has put U.S.-Turkish relations on shaky ground.

The Turks have been fighting a Kurdish insurgency and independence movement on their own territory for decades.

Thus, Turkey, by sanctioning the aid flotilla and putting one of its flagged vessels in the lead, and Israel, by launching the bloody confrontation with the convoy, are testing American diplomacy to the utmost.

Washington has stood beside the Israelis throughout their history, vetoing many anti-Israel U.N. Security Council resolutions. At the same time, the U.S. has been at pains to keep the Turks in place as a valued NATO member and democratic buffer against Iran and Arab dictatorships like Syria.

Now it would seem that President Obama has to choose. And he's going to have to make that wrenching decision even as he faces the worst U.S. environmental catastrophe - the so-far unstoppable spewing of millions of gallons of crude into the Gulf of Mexico from a blowout BP well.

He's already under heavy criticism for being late to take charge of the damaging six-week oil accident as he intently battles opposition Republicans over his ambitious domestic agenda.

Now he must hit the diplomatic sweet spot over the Israeli attack, and that could prove an impossible task.
By Associated Press Writer Steven R. Hurst