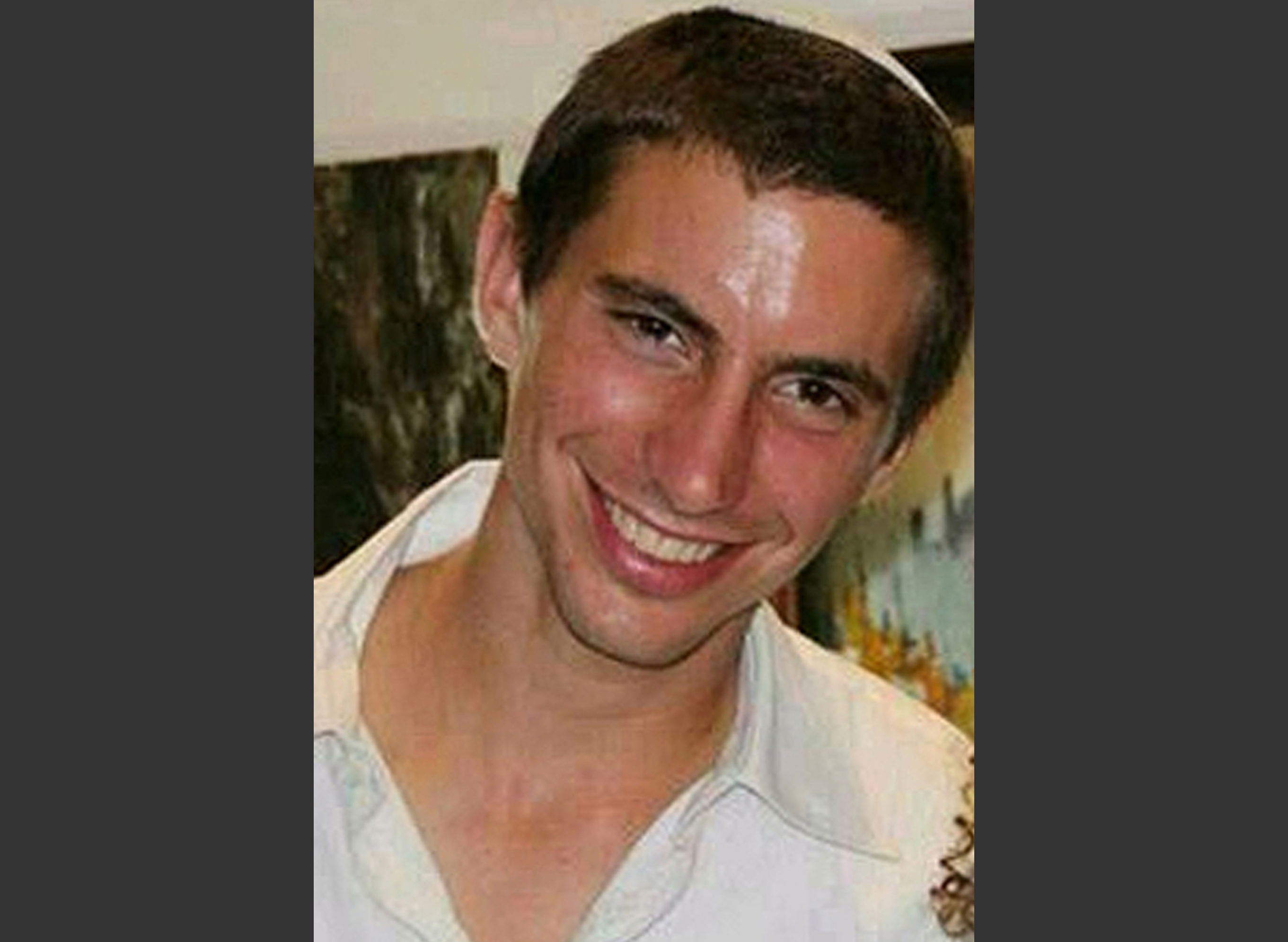 JERUSALEM -- An Israeli soldier the military feared had been abducted by Palestinian gunmen in a firefight that shattered a temporary ceasefire in Gaza has been declared dead, ending what could have been a nightmare scenario for Israel hours after it signaled it plans to scale back its operation against Hamas militants.

The military announced early Sunday that 23-year-old Hadar Goldin of the Givati infantry brigade had been killed in battle on Friday. Israel's defense minister, along with the chief military rabbi, met with the soldier's family at their home in the town of Kfar Saba.

Hundreds of well-wishers had gathered outside their home, praying and showing their support. There was an outpouring of grief when the military's announcement was made public.

"Prior to the decision, all medical considerations, religious observances, as well as additional relevant issues were taken into consideration," the military said.

The Israeli military had previously said it believed the soldier was grabbed in a Hamas ambush about an hour after an internationally brokered cease-fire took effect Friday morning. Hamas on Saturday distanced itself from the soldier's alleged capture, which had prompted widespread international condemnation. U.S. President Barack Obama, U.N. chief Ban Ki-moon and others had called for his immediate and unconditional release.

For Israel, the capture of a soldier or civilian by Palestinian militants is a nightmare scenario with far-reaching implications.

Israel has gone to great lengths in the past to get back its captured soldiers. In 2011, it traded over a thousand Palestinian prisoners, many involved in deadly attacks on civilians, for a single Israeli soldier who had been captured by Hamas-allied militants in 2006. The capture of two soldiers in a cross-border operation by Lebanon's Hezbollah gunmen in 2006 sparked a 34-day war between the Iranian-backed militant Shiite group and Israel.

Soon after the soldier was believed abducted on Friday, Israel conducted extensive searches in the territory and deployed heavy fire that killed scores of Palestinians.

On Saturday, Israel signaled it plans to scale back its military operation in Gaza and will not participate for now in any cease-fire negotiations in Cairo with Hamas. But the Islamic militant group suggested it won't hold its fire in the case of a unilateral Israeli pullout, raising the prospect of renewed hostilities in the future.

Israel continued to pound Gaza with airstrikes Saturday, killing at least 72 Palestinians, many in the southern border town of Rafah where Israeli troops searched for the soldier.

In a televised address, Prime Minister Benjamin Netanyahu suggested that the Israeli military will reassess its Gaza operation once troops complete the demolition of Hamas tunnels under the Gaza-Israel border. Once the tunnels are demolished, "the military will prepare for continuing action in according to our security needs," he said, stressing all options remain on the table.

"We promised to return the quiet to Israel and that is what we will do. We will continue to act until that goal is reached, however long it will take and with as much force needed," Netanyahu said. "Hamas needs to understand that it will pay an intolerable price as far as it is concerned for continuing to fire."

D'Agata spoke with Netanyahu on Saturday and the prime minister indicated Israel has no plans to negotiate with Hamas anytime soon and blamed Hamas for breaking the cease-fire.

Since the Gaza war began July 8, at least 1,712 Palestinians, including many civilians, have been killed and more than 9,000 have been wounded, Palestinian health official Ashraf al-Kidra said. Israel has now lost 64 soldiers and three civilians, its highest death toll since its 2006 with Lebanon's Hezbollah. Hundreds of soldiers have been wounded.

Large swaths of Gaza have been destroyed and some 250,000 people have been forced to flee their homes. In Israel, much of the country has been exposed to Hamas rocket fire.

"That leads us to the conclusion that with this organization there is no point in speaking about an agreement or a cease-fire because we have tried it too many times," Steinitz said.

Already, there were signs of troop redeployments in Gaza.

The Israeli military told residents of the northern Gaza town of Beit Lahiya that it would be safe for them to return to their homes. The area, from which Gaza militants had fired rockets at Israel in the past, came under heavy tank fire during Israel's ground operation, forcing thousands to flee.

Israeli troops and tanks also started a gradual pullback from the area east of the Gaza town of Khan Younis to the border with Israel, residents and police officials there said.

Israel ended a previous major military operation in Gaza more than five years ago with a unilateral pullback.

From an Israeli perspective, the advantage of a unilateral pullout or troop redeployment to the strip's fringes is that it can do so on its own terms, rather than becoming entangled in negotiations with Hamas. Hamas has said it will only halt fire if Israel and Egypt lift their seven-year-old border blockade of the territory.

However, a unilateral pullback does not address the underlying causes of cross-border tensions and carries the risk of a new flare-up of violence in the future, a prospect underlined by defiant Hamas messages Saturday.

"We will continue to resist until we achieve our goals," Hamas spokesman Fawzi Barhoum said after Netanyahu's speech, dismissing the Israeli leader's remarks as "confused."

Israel has said a main purpose of its Gaza operation is to seek and destroy tunnels dug by Hamas that stretch into the Jewish state. Israel views the tunnel network as a strategic threat intended to facilitate mass killing sprees on its civilians and soldiers.

Palestinian militants trying to sneak into Israel through the tunnels have been found with sedatives and handcuffs, an indication they were planning abductions, a tactic Hamas has used in the past.

Several soldiers have been killed in the current round of fighting by Palestinian gunmen who popped out of underground tunnels near Israeli communities along the Gaza border.

Many residents of the communities near the tunnel openings inside Israel have said they feel terrified.

Dealing with the tunnel threat is a serious challenge facing Israel after the current round of violence ends.

Meanwhile, the extent of destruction around Rafah became clear after intense Israeli shelling in response to Goldin's suspected capture killed 70 and wounded some 450. Entire apartment buildings in Rafah were flattened. Rescue teams sprayed water on charred rubble as families searched the wreckage for any salvageable belongings. Nearly two dozen bodies wrapped in bloodstained white cloth lay piled on the ground and the shelves of a cold storage room in a flower farm.

The farm's owner, Ghazi Hijazi, said the Health Ministry asked him to keep the bodies.

Imad Baroud, his wife and three kids fled by foot from their home near the Gaza-Egypt border to his parents' home in the center of Rafah to escape the shelling. He said his home was hit by artillery shells immediately after they left.

"The situation could not be described in words. The kids were yelling, they were scared, my wife was scared. I felt death was close," Baroud said.

Palestinian officials reported more than 150 Israeli airstrikes Saturday across Gaza, including several against mosques and one against the Hamas-linked Islamic University in Gaza City. Heavy shelling also continued along the border areas.

The Israeli military said it struck 200 targets over the previous 24 hours. It said it attacked five mosques that concealed weapons and that the Islamic University was being used as a research and weapons manufacturing site for Hamas. The claim could not be independently verified.

Gaza militants, meanwhile, fired about 90 rockets at Israel since midnight, according to the Israeli military. Seven were intercepted by Israel's rocket defense system, it said, while a mortar attack seriously injured a 70-year-old Israeli civilian.