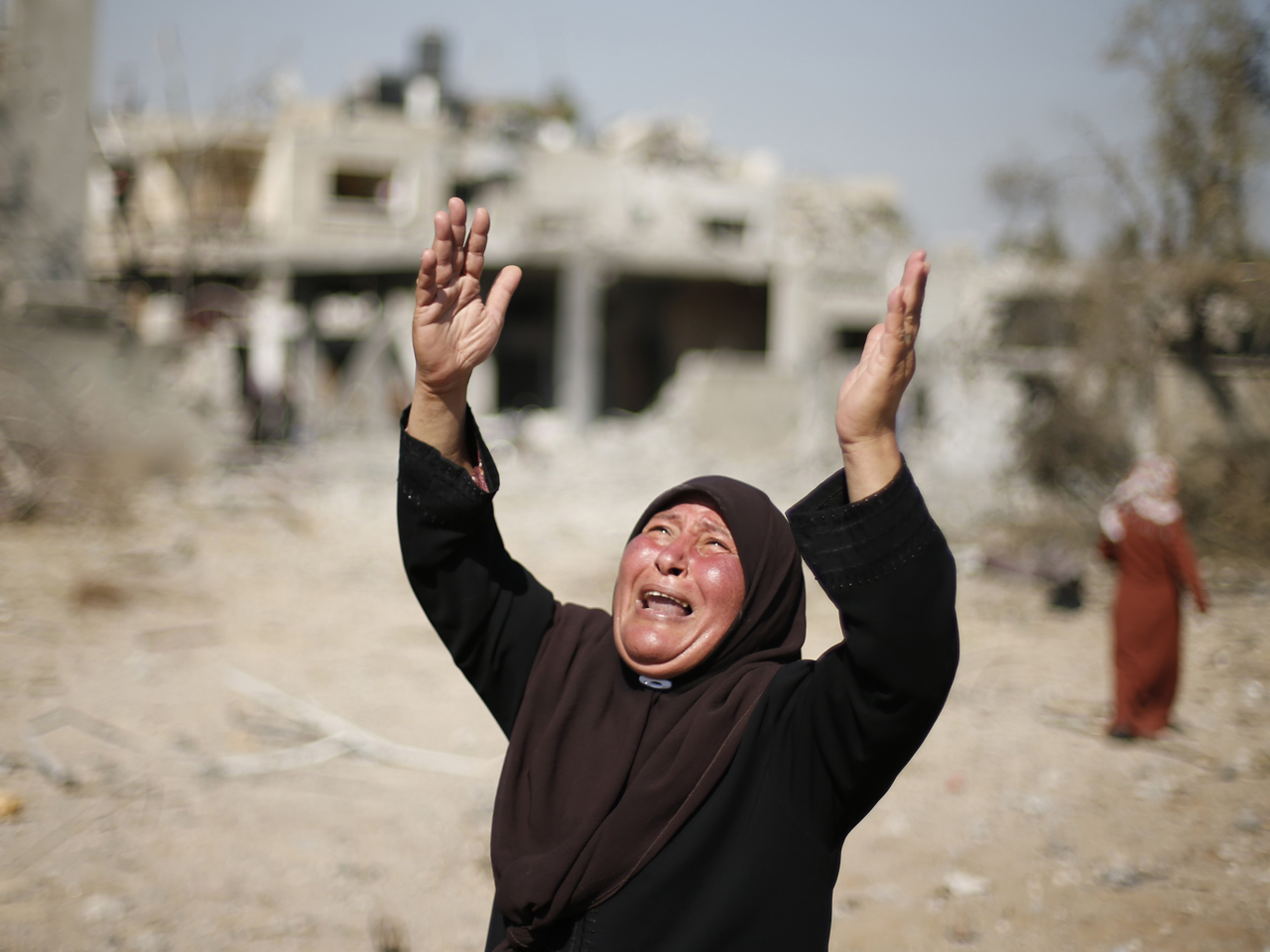 GAZA CITY, Gaza Strip -- Israeli forces, backed by heavy tank fire and airstrikes, moved deeper into southern Gaza late Friday in search of a soldier apparently captured in a clash with Hamas militants earlier in the day. At least 70 Palestinians and two Israeli soldiers were killed in the fierce fighting that quickly shattered an internationally brokered cease-fire.

The truce collapsed less than two hours after it began. A senior Israeli official told CBS News the decision had been made to end the cease-fire and blamed Hamas squarely for violating its terms by resuming rocket fire. Hamas denied breaking the cease-fire.

The Israeli Cabinet held a rare session after the start of the Jewish Sabbath on Friday evening to weigh options, including whether to expand the 25-day-old operation against Hamas.

"We are under fire. Every minute or so, tanks fire shells," said Ayman al-Arja, 45, a resident of the area.

A CBS News team approaching the Kerem Shalom border crossing at the far southern end of the Gaza Strip, from the Israeli side, heard explosions and was told by Israel Defense Forces (IDF) personnel that rocket fire was coming into the area from the Gaza side.

Meanwhile, U.N. Secretary-General Ban Ki-moon blamed Hamas for violating what was meant to be a three-day humanitarian cease-fire and demanded the immediate and unconditional release of the missing soldier.

The cease-fire, which had been announced by the U.S. and the U.N., took effect at 8 a.m. Friday.

The breakdown of the truce and the apparent capture of the Israeli soldier set the stage for a major escalation. The conflict has already devastated large swaths of the coastal area and killed at least 1,500 Palestinians, mainly civilians, according to Palestinian officials. Israel has lost 63 soldiers and three civilians.

An hour after Friday's cease-fire started, gunmen emerged from one or more Gaza tunnels and opened fire at Israeli soldiers, with at least one of the militants detonating an explosives vest, said Israeli army spokesman Lt. Col. Peter Lerner.

Hadar Goldin, a 23-year-old second lieutenant from the central Israeli town of Kfar Saba, was apparently captured during the ensuing mayhem, while another two soldiers were killed.

"We suspect that he has been kidnapped," Lerner said.

President Obama and U.N. chief Ban called for the immediate release of the soldier but also appealed for restraint.

Mr. Obama called for Goldin's unconditional and immediate release and said it would be difficult to put the cease-fire back together. However, he said the U.S. will continue working toward a cease-fire.

He said Israel committed to the truce, but at the same time called the situation in Gaza "heartbreaking" and repeated calls for Israel to do more to prevent Palestinian civilian casualties.

"Innocent civilians caught in the crossfire have to weigh on our conscience, and we have to do more," Mr. Obama said. He added that Israel must be able to defend itself, but that irresponsible actions by Hamas have put civilians in danger.

"Israel will take all necessary steps against those who call for our destruction and perpetrate terrorism against our citizens," Netanyahu told Kerry, according to a statement from the prime minister's office.

Mark Regev, Netanyahu's spokesman, said Hamas had "yet again thrown away a chance for a humanitarian relief for the people of Gaza, by deliberately violating this ceasefire."

If confirmed, Goldin's capture could dramatically change the trajectory of the conflict. Any cease-fire efforts would likely be put on hold and Israel might instead expand its ground operation. Israel has in the past gone to great lengths to return captured soldiers. In 2011, it traded hundreds of Palestinian prisoners for an Israeli soldier who had been captured by Hamas-allied militants in 2006.

A Hamas spokesman, Fawzi Barhoum, would neither confirm nor deny the capture, saying it was being used - along with news that two Israeli soldiers were killed in the Rafah area - as a cover for a "massacre."

The Israeli military said the heavy shelling in Rafah that followed was part of operational and intelligence activity designed to locate Goldin.

A longtime friend of Goldin's said he is engaged to get married and that he studied at a religious Jewish seminary in the West Bank settlement of Eli. Goldin has a twin brother who is also in the military on the Gaza front-lines, said the friend, who spoke on condition of anonymity because he did not have the family's permission to discuss Goldin's personal details with the media.

"We want to support the military in the fighting against Hamas in Gaza. We are sure the military will not stop before it turns over every stone in Gaza and returns Hadar home safe and sound," the father said in a brief statement to media outside his home.

The shelling in Rafah sent families fleeing from apartment blocks as pillars of smoke caused by the shelling rose from them. One woman carrying two children rushed toward a parked car. "Quickly, open the car door!" she yelled to a man standing nearby.

Ambulances ferried the wounded to Rafah's al-Najar hospital, where bloodied bodies on stretchers were carried inside and family members frantically searched for loved ones. Many of the wounded were children, their clothes stained with blood. In one hospital room, four children were treated on a single bed. Others were being examined on the floor.

The shelling killed at least 62 Palestinians and wounded at least 400 in Rafah, Gaza health official Ashraf al-Kidra said. Rescue workers were searching for people buried under the rubble, he added. He did not say whether those killed were civilians or militants.

On July 8, Israel launched an aerial campaign against Gaza aimed at halting Palestinian rocket fire and later sent in ground troops to target launch sites and tunnels used by Hamas to carry out attacks inside Israel.

Four brief humanitarian cease-fires had been announced since the conflict began, but each broke within a few hours. The military said Gaza militants had fired at least 23 rockets and mortars at Israel since the start of Friday's cease-fire, one of which was intercepted.

The latest cease-fire had been intended to be the first step toward a lasting truce, with Egypt inviting Israeli and Palestinian delegations to Cairo for talks.

Despite the collapse of the latest truce, an Egyptian government official said Cairo had not canceled its invitation for Palestinians and Israelis to hold talks there. "Invitations were delivered already to the delegations," said the official, who spoke on condition of anonymity because he wasn't authorized to speak to the media.

After the cease-fire started, Gaza's residents took advantage of the lull to return to their homes, many of which had been destroyed in the fighting.

In the heavily bombarded Gaza district of Shijaiyah, less than 1.6 kilometers (a mile) from the Israeli border, residents surveyed the damage.

Bassem Abul Qumbus found his three-story home - in which he had invested tens of thousands of dollars - shattered. Shells had punched a hole in the ceiling of one bedroom and a wall had collapsed into the kitchen.

"The work of all those years is gone," he said, as he struggled to salvage flour from bags that had been torn apart by shrapnel.

In the southern town of Khan Younis, residents searched for bodies in the rubble of their homes as rescuers and volunteers carried away corpses, some charred, on makeshift stretchers.

Nidal Abu Rjeila found the body of his disabled sister on the ground on the side of the road, her wheelchair flipped upside down. He said her body had been there for five days.

"I tried to reach human rights groups and the Red Cross, but no one was answering me," he said as he lay down by his sister's body, overcome by grief.

Israel says it has tried to spare civilians, including by warning people ahead of military strikes, and has said Hamas endangers Gazans by firing rockets from residential areas.

Palestinian militants have fired hundreds of rockets into Israel since the start of the conflict, extending their reach to major cities but causing very few casualties, in part because Israel's Iron Dome defense system has intercepted many of the projectiles.

Hamas has vowed to keep fighting until Israel and Egypt lift a blockade of Gaza imposed after the Islamic militant group seized power there in 2007, which has devastated the local economy.

Gaza's police operations room said that by Friday afternoon, Israeli ground forces had moved deeper into the Rafah area from the east. There were also airstrikes along the nearby Egypt-Gaza border, as well as heavy shelling.