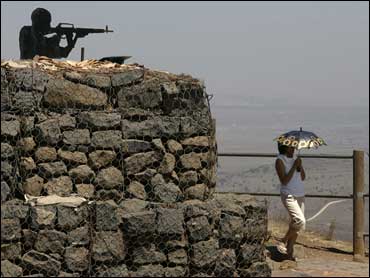 The veil of secrecy Israel has thrown around an alleged air raid on Syria earlier this month was drawn even tighter on Sunday when the chief of military intelligence was ordered to keep mum on the issue in his appearance before a powerful parliamentary panel.

With Israel's usually talkative government maintaining an uncharacteristic silence, information on the mysterious incident has come almost exclusively from abroad.

Discussing the incident on an Israeli TV station Sunday, an outspoken former U.S. ambassador to the U.N. said he thought Israel might have been attacking a nuclear installation, "a message not only to Syria, but to Iran."

Tzachi Hanegbi, chairman of the Israeli parliament's foreign affairs and defense committee, told reporters he instructed military intelligence chief Amos Yadlin to avoid any mention of Syria at a committee meeting on Sunday. Panel members regularly report to journalists during and after committee meetings.

In a statement some participants took to be an oblique reference to the success of the alleged Syria raid, Yadlin told the meeting, "Israel's deterrence has been rehabilitated since the Lebanon war, and it affects the entire regional system, including Iran and Syria," according to a lawmaker who was present. Yadlin was referring to the inconclusive results of Israel's campaign against Hezbollah in Lebanon last summer.

The lawmaker spoke on condition of anonymity because he was not authorized to disclose the meeting's contents to the media.

"I think it would be unusual for Israel to conduct a military operation inside Syria other than for a very high value target, and certainly a Syrian effort in the nuclear weapons area would qualify," the former U.N. ambassador, John Bolton, told Israeli Channel 10 TV in an interview broadcast Sunday.

"I think this is a clear message not only to Syria, I think it's a clear message to Iran as well, that its continued efforts to acquire nuclear weapons are not going to go unanswered," Bolton said.

CBS News correspondent Robert Berger reports that if Bolton's assessment turns out to be true, then Israel risked going to war to send a clear message - that nuclear weapons in Syria will not be tolerated.