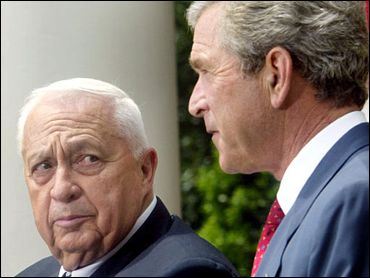 President Bush has given visiting Israeli Prime Minister Ariel Sharon broad support on key issues, backing away from overt criticism of a West Bank security fence and disappointing Palestinians in the process.

Israel got what it wanted from Sharon's visit to the White House, reports CBS News Correspondent Robert Berger. President Bush demanded that the Palestinians dismantle terrorist groups, and he also toned down criticism of Israel's West Bank security wall. Sharon vowed that construction on the wall would continue with the aim of keeping suicide bombers out, and he got away with it.

Sharon, who was to meet Vice President Dick Cheney on Wednesday morning before flying home, promised Mr. Bush that he would make sure to minimize suffering to Palestinians through whose lands the fence will run.

Meanwhile, Israeli and Palestinian security chiefs were to meet Wednesday to discuss an Israeli pullout from two more West Bank towns that have been quiet: Jericho and Kalkilya. This follows Israel's pullout from Bethlehem and parts of the Gaza Strip. Israel had said that it would not withdraw from any more areas until the Palestinians keep their commitment under the peace roadmap and dismantle terrorist groups. That hasn't happened, but Israel decided to leave two more towns to keep up the momentum in the peace process.

Last week, the president hosted Palestinian Prime Minister Mahmoud Abbas and said the partially built barrier, which in some places cuts deeply into Palestinian territory and divides farms, was not helpful to peace efforts.

On Tuesday, Sharon argued that the fence was essential to stop Palestinian bombers and gunmen from slipping into Israel to carry out attacks. He said construction would go on.

"The security fence will continue to be built with every effort to minimize the infringement on the daily life of the Palestinian population," Sharon told reporters as he stood next to Mr. Bush in the White House Rose Garden.

President Bush echoed Sharon's call for Abbas to break up Palestinian militant groups so they no longer posed a threat to Israelis. If that were done, he added, the fence could become redundant.

"I would hope in the longer term that the fence would be irrelevant," Mr. Bush said. "The fence is a sensitive issue. I understand that."

Sharon made a veiled allusion to the issue on arrival at the White House as he signed the visitors' book.

"True friendship among allies can overcome every obstacle," he wrote. "No barrier can separate nations and leaders committed to peace, liberty and security."

Mr. Bush said Israel must consider the consequences of its actions on the peace process, but Israeli and U.S. officials said the comment was a general one, not linked to any specific issue.

Not surprisingly, the Palestinians, who oppose the wall, are disappointed. They feel that without more U.S. pressure on Israel, the peace process will fail.

"I had hoped that Mr. Bush would stand there next to Sharon and tell him stop it, stop building the wall," Palestinian lawmaker Saeb Erekat told The Associated Press in Jerusalem.

In Gaza, Hamas leader Abdel Aziz Rantisi said the president's remarks showed that Abbas had failed to win U.S. acceptance of the Palestinian position in his trip to Washington.

"The Bush statement reflects the total bias of the United States in favor of the Zionist enemy," Rantisi told the AP, "and it reflects also the failure of Prime Minister Abbas' visit."

Mr. Bush was trying to revitalize a U.S.-backed peace plan launched last month in Aqaba, Jordan, that calls for creation of a Palestinian state by 2005. Although there has been a pause in violence, there have only been a handful of steps by each side to move the process forward.

"I encouraged the prime minister to take further steps to improve the daily conditions faced by Palestinians," Mr. Bush said.

On another touchy issue, Sharon said he and the president agreed there would be no release of Palestinian prisoners "with blood on their hands," those who are likely to return to terrorism if released.

Abbas last week demanded the release of most of the 7,000 Palestinian prisoners held in Israeli jails. A few hundred have been released, and Sharon has promised to release several hundred more.

The two leaders also discussed the issue of settlements, although not in any detail, a senior Israeli official said.

The U.S.-backed, multinational road map to peace requires Israel to halt "settlement activity" at nearly 150 formal Jewish settlements. Israel must also take down small settlement outposts that have gone up since March 2001. Israel has removed a few such outposts in recent weeks, but others have been built.

Israeli official said 22 of the outposts had been dismantled and an additional 12 would follow shortly.

Sharon said that while the current pause in violence was important, "we are concerned that this welcome quiet will be shattered any minute as a result of the continued existence of terror organizations which the Palestinian Authority is doing nothing to eliminate or dismantle."

Following his meeting with President Bush, Sharon held talks with Secretary of State Colin Powell covering the dismantling of Palestinian militant groups and other issues, an Israeli official said.