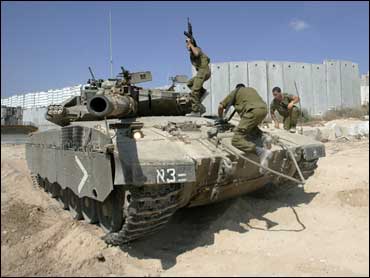 Rockets and mortar rounds continued to hit Israeli targets on Sunday, and Prime Minister Ariel Sharon Sunday warned there would be no holds barred in stopping an upsurge in Palestinian violence ahead of Israel's Gaza Strip pullout.

Thousands of Israeli troops massed along the Gaza border in preparation for a possible ground offensive. Israel Radio reported that Lt. Gen. Dan Halutz told Cabinet ministers preparations for the strike were complete.

Palestinian negotiator Saeb Erekat cautioned that an incursion would have "disastrous" consequences. Militants vowed to retaliate against any Israeli military assault.

Two Israelis were wounded seriously by a mortar that landed on a house in the Gaza settlement of Neve Dekalim, rescue officials said. It was the second house in the settlement to suffer such an attack in as many days.

Soon afterward, witnesses in Gaza City said the Israeli air force fired missiles at a car in northern Gaza on Sunday. Two men in the car escaped, but a bystander was seriously injured, the witnesses said. The Israeli military refused to comment.

An Israeli sniper also shot and killed a senior Hamas field commander in a targeted strike earlier in the day after another mortar round hit the same community, the army and Hamas officials said.

Troops shot and killed an armed Palestinian who tried to infiltrate another Gaza settlement and ignored orders to stop, the military said. Another infiltrator escaped, it added.

And an Israeli shell seriously wounded a 16-year-old Palestinian in the Khan Younis refugee camp, Palestinian rescue workers said. The military said troops fired on a group of men who were launching mortars.

Palestinian police, meanwhile, began removing Hamas, Islamic Jihad and Fatah flags from the streets of Gaza early Sunday, leaving only the Palestinian national flag. On Saturday, Palestinian leader Mahmoud Abbas said he would brook no challenges to his government's authority, and called on militants to stop their attacks.

A Palestinian suicide bombing and a rocket attack last week killed a total of six Israelis. Palestinian militants have fired more than 100 projectiles at Israeli targets since Thursday, in one of the heaviest onslaughts since the two sides declared a now-moribund truce in February.

Also Sunday, Israeli police declared a mass march by settlers in the Gaza Strip planned for Monday would be Gaza illegal. Settler leaders plan to send tens of thousands of protesters to the region to try to foil the planned pullout from the territory next month. Last week Israel closed the Gaza Strip to nonresidents to prevent opponents of the pullout from camping out to interfere with the evacuation.

The violence has cast a pall over the withdrawal plans, and has sent international mediators scrambling to try to restore calm ahead of the pullout.

"I spoke to the heads of the defense establishment ... and informed them that there are to be no restraints on our operations," Sharon told Cabinet ministers at the start of a weekly Cabinet meeting

Israeli Deputy Defense Minister Zeev Boim told Israel Radio earlier in the day that the military would decide soon whether to launch a ground offensive before or after U.S. Secretary of State Condoleezza Rice pays a snap visit to the region this weekend to try to halt the Palestinian attacks.

"It depends what will develop in the coming hours," Boim said. "It's a matter of hours. We will not suffer such a heavy rain of Qassam (rockets.)"

The army plans to invade northern Gaza ? the area militants use to fire rockets at Sderot ? but a military official said on condition of anonymity that the deployment of thousands of soldiers along the border is meant more as a threat for the time being.

Erekat said an Israeli incursion into Gaza "will have a disastrous impact on the disengagement plan, and all efforts to make it a successful and smooth and peaceful disengagement."

Mushir Masri, a Hamas spokesman in Gaza, said an Israeli incursion would touch off more violence.

"They should understand that by this serious escalation they have opened the gates of Hell, and if they enter Gaza we are not going to stand by silently," Masri said. Hamas, he said, was re-evaluating the truce,

An Egyptian delegation arrived in Gaza Sunday to try to salvage the tattered cease-fire. Masri said Hamas, which is to meet with the Egyptians later in the day, welcomed efforts to end the tension.

Mofaz postponed a trip to Washington because of the escalating violence, ministry officials said on condition of anonymity. Mofaz was to have left for the U.S. on Saturday, but now plans to go later in the week.

While the focus Sunday was on stopping Palestinian militants, Israeli officials were also occupied with preventing Jewish extremists from disrupting next month's pullout.

Sharon told his Cabinet that "the severest possible measures" must be taken to prevent pullout opponents from entering Gaza in an effort to sabotage the evacuation, the Cabinet meeting participant said.

Settlers and their supporters plan a massive march and rally this week in defiance of last week's order to seal Gaza to nonresidents. Police official Uri Bar Lev said police would not authorize the protest because demonstrators plan to cross into Gaza.

Gaza was sealed last week to prevent withdrawal opponents from flooding the strip and tying up evacuation forces.

The evacuation has also touched off dissidence within army ranks. Halutz ordered a 40-member platoon disbanded Sunday after nine of its soldiers disobeyed orders to stop demonstrators from entering the Gaza settlement bloc, the military said in a statement.The military had reported earlier that a 120-member company had been dissolved.

Hundreds of settlers opposed to the dismantling of Gaza settlements clashed with police and soldiers overnight, leaving several injured on both sides by dawn Sunday.