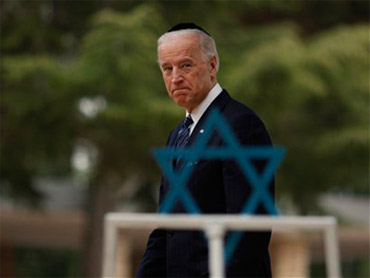 The Interior Ministry announced the construction plans just as Biden was wrapping up a series of warm meetings with Israeli leaders. There was no immediate reaction from the vice president.

Relations between Israel and the Obama administration have been chilly precisely because of the settlement issue. The U.S., like the Palestinians and the rest of the international community, believe that Israeli settlements built on lands claimed by the Palestinians undermine peace prospects, and President Obama has been more outspoken on the issue than his predecessors.

Israeli Prime Minister Benjamin Netanyahu has rebuffed calls from the White House to halt all settlement activity, agreeing only to a limited freeze that does not include east Jerusalem.

Interior Ministry spokeswoman Efrat Orbach said the new homes would be built in Ramat Shlomo, a neighborhood for ultra-Orthodox Jews in east Jerusalem. She noted that there is a 60-day appeals period, indicating that the decision could yet be changed.

But Palestinian negotiator Saeb Erekat said the move was destroying trust needed to go forward with the new round of indirect peace talks, which the two sides agreed this week would take place under the mediation of U.S. envoy George Mitchell.

"With such an announcement, how can you build trust? This is destroying our efforts to work with Mr. Mitchell," he said. "It's a really disastrous situation. I hope that this will be an eye-opener for all in the international community about the need to have the Israeli government stop such futile exercises."

The announcement cast a sudden shadow over the visit by Biden, aimed largely at repairing the relationship with Israel. Biden's public comments throughout the day had clearly been meant to calm Israeli concerns that Mr. Obama has been less friendly to the country than past U.S. leaders.

Biden told Israel Tuesday that the U.S. is willing to stand by those who will "take risks for peace." Biden told Netanyahu that he was confident Israel was prepared to take such risks.

The move also may have been the result of internal politics. A spokesman for Netanyahu said he was unaware of the announcement, raising the possibility that the Interior Ministry — run by a hardline religious party — had not coordinated the news with the Israeli leader or even tried to embarrass him.