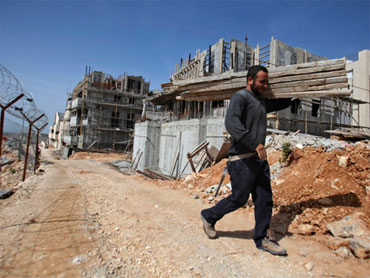 Vice President Joseph Biden told Israel Tuesday that the U.S. is willing to stand by those who will "take risks for peace."

Biden told Israeli Prime Minister Benjamin Netanyahu that he was confident Israel was prepared to take such risks.

Israelis and Palestinians face a "moment of real opportunity" to make peace after agreeing to resume American-brokered talks, Biden said as he launched the highest-level visit by an Obama administration official to Israel.

Monday's announcement of indirect talks, which will be held through a U.S. mediator, broke a 14-month deadlock and marked President Obama's first substantive diplomatic achievement in the region.

But the new peace push is sure to face enormous challenges, including sharp divisions among the Palestinians and a hardline Israeli government seen as unlikely to make wide-ranging concessions.

"I think we are at a moment of real opportunity, and I think that the interests of the Israeli and Palestinian people, if everybody stops and takes a deep breath, are actually more in line than they are opposites," Biden said ahead of a meeting with Israel's president, Shimon Peres.

Biden said he hoped the beginning of indirect talks would be "a vehicle by which we can begin to allay that layer of mistrust that has built up in the last several years."

Polls show that Israelis have come to see Obama as less friendly to Israel than previous presidents and Biden's visit seemed aimed at least in part at assuaging some of those concerns, both among Israelis and their American supporters, whose backing is seen as crucial ahead of next November's congressional elections.

The vice president also offered assurances that the U.S. remained committed to Israel's well-being, saying there was "absolutely no space between the United States and Israel when it comes to Israel's security, none at all." Israel has been pushing for stricter international sanctions targeting Iran's nuclear program, and has refused to rule out a military strike if sanctions fail.

Obama began his term with a push for Mideast peace, prodding Israel to freeze its construction of West Bank settlements that swallow up land the Palestinians want for a future state. But that call came just as Netanyahu took over in Israel, and though the Israeli leader scaled back settlement construction, he would not accept a full freeze.

Israel announced the authorization to construct 112 new apartments in the West Bank on Monday, despite its pledge to slow down settlement building. That move enraged the Palestinians just a day after they said they would resume the peace talks.

Obama's insistence on a total settlement freeze is seen by many in the region to have backfired by encouraging Palestinians to stake out a position that was politically untenable for Israel's hawkish government.

The Palestinians are still saying they will not talk directly to Israel unless it freezes settlement building completely.

But hours after Biden's arrival Monday, the U.S. announced the sides would begin indirect peace negotiations. The fact that the discussions will be held through a U.S. mediator attests to the estrangement between the Israelis and Palestinians, who have been speaking to each other directly, on and off, since the early 1990s.

Biden also was slated to meet Palestinian President Mahmoud Abbas on Wednesday before traveling to Jordan on Thursday.