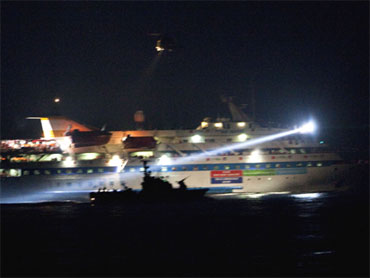 The Israeli military said Tuesday it has set up an internal team of experts to examine last week's deadly commando raid on a Gaza-bound flotilla, while the government sought a broader formula to meet mounting international calls for an impartial probe into the incident.

The military said the team would review various internal investigations already going on, and expects some findings by July 4.

On Sunday an Israeli Foreign Ministry official said that U.N. Secretary-General Ban Ki-moon is moving ahead with plans for an international commission that would include Israeli, Turkish and U.S. representatives.

Nine pro-Palestinian activists - eight Turks and an American-Turkish teenager - were killed after a squad of naval commandos stormed a ship trying to breach Israel's blockade of the Gaza Strip.

The incident triggered a storm of criticism of Israel, which said its soldiers began shooting only after a mob of activists attacked them. But the activists and their supporters claimed Israeli commandos needlessly opened fire.

The U.N. Security Council has called for "a prompt, impartial, credible and transparent investigation conforming to international standards." The Palestinians and Arabs are insisting that the probe be "independent"; Israel objects to such an inquiry, believing the international community is biased and that it is capable of investigating the incident itself.

The international community has questioned the ability of the Israeli military to credibly investigate its own actions, after it only acknowledged occasional mistakes in its much-criticized war in Gaza 18 months ago.

A U.N.-appointed panel headed by veteran war crimes prosecutor Richard Goldstone later accused Israel of war crimes in that offensive, a charge Israel rejects. Israel's experience with the Goldstone commission has only reinforced its resistance to a U.N.-led investigation of the flotilla raid.

Senior Israeli Cabinet ministers on Monday proposed establishing a commission of Israeli jurists, joined by foreign observers, whose mandate would be to examine the legality of the Gaza blockade and the commandos' conduct.

The proposal has been mooted to U.S. and international officials to see if it meets their criteria for an impartial probe, government officials said. They spoke on condition of anonymity because the plan has not been officially announced.

The U.S. Embassy had no comment on the details of the proposal.

Critics in Israel have faulted the proposal, saying it doesn't empower commission members to investigate the political decision-making that led up to the raid or intelligence failures ahead of the deadly confrontation. In addition, soldiers would not be questioned.

New Zealand's current Prime Minister John Key on Tuesday called Palmer, "very, very intelligent" with "a great knowledge of the law," and said his possible appointment was recognition "that New Zealand is seen as an honest broker - we don't take sides between Palestine and Israel."

U.N. associate spokesman Farhan Haq told reporters Monday that the secretary-general has been in contact with Israeli and Turkish leaders and other key parties to try to bridge differences and ensure that any investigation has "the full cooperation" of the countries most closely concerned. But he said "there have been no names formally conveyed to any of the parties."

"There's a considerable amount of discussion going on about the format of a potential inquiry," Haq said. "The secretary-general is also developing possible terms of reference and logistical arrangements for such an effort."

Shalom, who is Prime Minister Benjamin Netanyahu's deputy and sometimes rival in the ruling Likud Party, when asked whether there would be an international component to an investigation (as the U.S., Britain and others have urged) replied: "We are dealing with them, and I think we will take the decision together."

Will that decision be satisfactory to all the concerned parties?

"I know it will be a satisfactory decision for the truth," Shalom replied.

The investigation is virtually certain to be on the agenda of a meeting Wednesday between Israel's Foreign Minister Avigdor Lieberman, who flew to New York on a long-planned visit, and U.S. Ambassador Susan Rice.

Israeli forces rappelled from helicopters onto the six vessels in the international aid flotilla on May 31 to prevent them from breaking an Israeli blockade of Gaza, imposed in 2007 after Hamas overran the territory. There was no violence on five of the ships, but video footage from the Israeli military and Turkish TV showed passengers attacking the Israeli soldiers descending on ropes onto a Turkish ship with metal bars.

Israel claims its troops acted in self-defense against the attackers. A preliminary autopsy report released by Turkey on Saturday said the nine men killed were shot a total of 30 times.

The outrage over the deaths has prompted calls from many nations, including the United States, for at least a partial lifting of the blockade that Israel says is necessary to isolate the Islamic militants of Hamas who control Gaza and keep them from expanding their arsenals.

Haq said the secretary-general is continuing to work to ease the situation in Gaza.

Envoys from the "Quartet" of Mideast peacemakers - the U.N., the U.S., the European Union and Russia - had a teleconference Monday in which they discussed how to preserve and strengthen the U.S.-mediated indirect talks between Israel and the Palestinians, Haq said.

"They also discussed the urgent need for a fundamentally different strategy in Gaza," he said.

The four parties agreed to continue their intensive consultations in order to make recommendations to their leaders as soon as possible on a new strategy, Haq said.