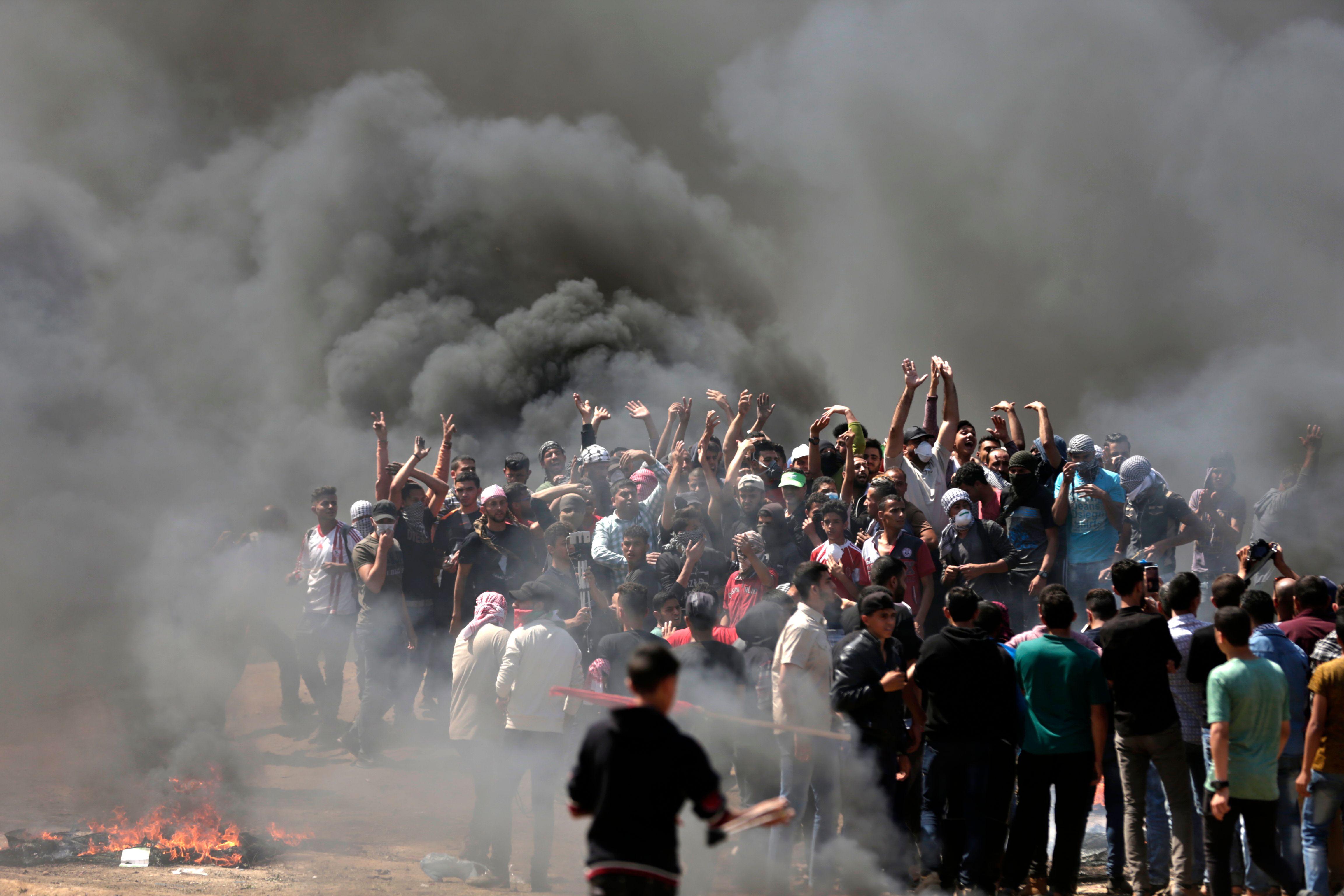 GAZA STRIP -- Israeli troops fired from across a border fence Monday, shooting and killing at least 52 Palestinians and wounding hundreds more in protests near the Gaza border, according to Palestinian officials, casting a dark shadow over the ceremony marking the opening of the new U.S. Embassy in Jerusalem. Monday's protest was against a decade-long blockade of the Palestinian territory, but also aimed at the inauguration of the embassy in the contested holy city.

Palestinian President Mahmoud Abbas cut ties with the Trump administration and declared it unfit to remain in its role as the sole mediator in peace talks.

Saeb Erekat, a senior Abbas aide, blasted the Trump administration Monday, saying Mr. Trump had violated a promise to hold off on moving the embassy to give peace talks a chance and that his administration is "based on lies."

Erekat said the Trump administration has "become part of the problem, not part of the solution." He suggested Mr. Trump's Mideast team was unqualified, saying "the world needs real leaders, and those (White House officials) are real estate dealers, not leaders."

President Trump's daughter Ivanka Trump and he husband Jared Kushner, who has had a prominent role in shaping the administration's Middle East policy in spite of his relative inexperience in international diplomacy, were both in Jerusalem to attend the inauguration ceremony on Monday.

Gaza residents streamed to the border area for what was intended to be the largest protest yet against the decade-old blockade of the territory. Israel's military had warned that it would stop any border breach at all costs, warning protesters that they are endangering their lives.

Gaza's Hamas-run Health Ministry said 37 people were killed and almost 2,000 injured by the Israeli fire across the border on Monday. The death toll was climbing fast, making it the deadliest day in Gaza since the devastating cross-border war between the territory's Hamas rulers and Israel in 2014.

Since weekly border marches began in late March, more than 70 Palestinian protesters have been killed and more than 3,500 wounded by Israeli army fire.

Early Monday morning, Israeli jets dropped leaflets onto the gathering protest crowds, warning that anyone approaching the border fence would risk their lives in doing so, and blaming the Hamas militant group, which controls Gaza, for any harm that comes to Palestinians in the standoff.

The warning said the army was "prepared to face all scenarios and will act against every attempt to damage the security fence or harm IDF soldiers or Israeli civilians."

Near Gaza City, hundreds gathered about 150 yards from the fence.

Protester Mohammed Hamami, 40, said the march was a "message to Israel and its allies that we will never give up on our land." Most Gaza residents are descendants of refugees from the Mideast war over Israel's 1948 creation.

Gaza's Hamas rulers said tens of thousands were expected to head to the border Monday and raised the possibility of large crowds breaking through the fence.

With Israel and Hamas digging in, there has been growing concern about large numbers of casualties.

Monday's march is part of a weekslong campaign, led by Hamas and fueled by despair among Gaza's 2 million people, to break the decade-old border blockade of the territory by Israel and Egypt.

Administration officials have dismissed Palestinian criticism, portraying the embassy opening as an essential step toward an eventual Israeli-Palestinian peace deal.

As the death toll mounted in Gaza, both President Trump and Netanyahu lauded the embassy move, with the U.S. president declaring it "A great day for Israel!" and Netanyahu thanking him not long after and proclaiming it "an amazing day" for the Jewish state.

Treasury Secretary Steven Mnuchin, speaking Monday at an event in Jerusalem ahead of the opening ceremony, said it was a U.S. "national security priority" to relocate the embassy from Tel Aviv to Jerusalem.

Mr. Trump's Mideast peace negotiator, Jason Greenblatt, wrote on Twitter that "the long-overdue step of moving our Embassy is not a departure from our strong commitment to facilitate a lasting peace deal."

Greenblatt and other administration officials have not said how they would move forward without a Palestinian partner.

Netanyahu praised Mr. Trump's "bold decision" in upending decades of U.S. policy by recognizing Jerusalem as Israel's capital. "It's the right thing to do," a smiling Netanyahu told the jubilant crowd at a reception in Jerusalem late Sunday.

Although Mr. Trump has said his declaration does not set the final borders of the city, his recognition of Jerusalem as Israel's capital has been perceived by both Israel and the Palestinians as taking Israel's side in the most sensitive issue in their conflict. Only two countries, Guatemala and Paraguay, have said they will follow suit. Most of the world maintains embassies in Tel Aviv, saying the Jerusalem issue must first be resolved.

In a reflection of the deep sensitivities, dozens of countries -- including Britain, France and Germany -- skipped a celebration Sunday night at the Israeli Foreign Ministry.