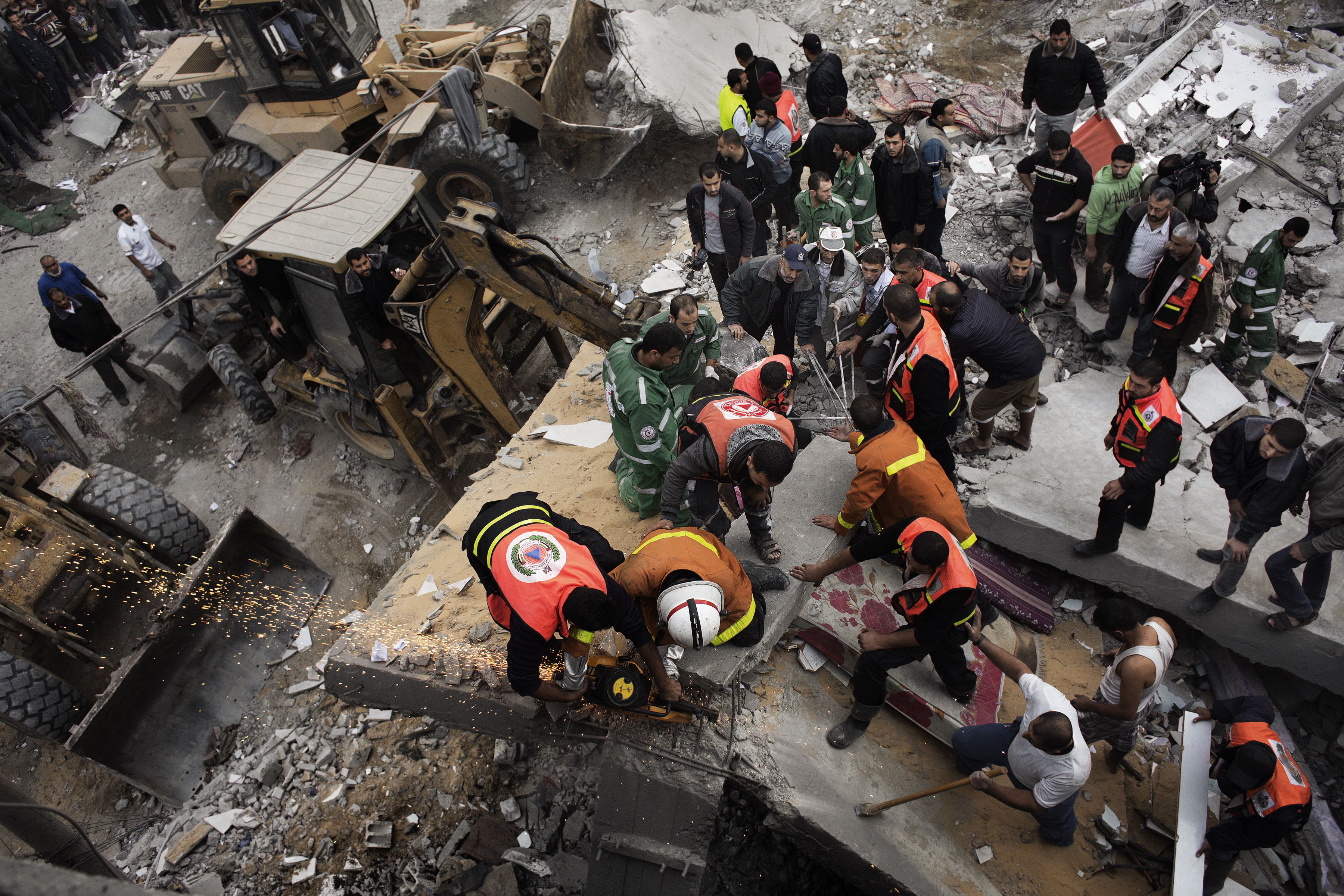 GAZA CITY, Gaza Strip Israel expanded its fierce air assault on rocket operations in the Gaza Strip on Saturday, striking Hamas government and security compounds, smuggling tunnels and electricity sources after an unprecedented rocket attack aimed at the holy city of Jerusalem raised the stakes in its violent confrontation with Palestinian militants.

Israeli aircraft also kept pounding their initial targets, the militants' weapons-storage facilities and underground rocket-launching sites. The Israeli military called up thousands of reservists and massed troops, tanks and armored vehicles along the border with Gaza, signaling a ground invasion of the densely populated seaside strip could be imminent.

Israel launched its military campaign Wednesday after days of heavy rocket fire from Gaza and has carried out some 700 airstrikes since, the military said. Militants, undaunted by the heavy damage the air attacks have inflicted, have unleashed some 500 rockets against the Jewish state, including new, longer-range weapons turned for the first time this week against Jerusalem and Israel's Tel Aviv heartland.

Israel has slowly expanded its operation beyond military targets and before dawn on Saturday, the Gaza Interior Ministry reported, missiles smashed into two small Hamas security facilities as well as the massive Hamas police headquarters in Gaza City, setting off a huge blaze that engulfed nearby houses and civilian cars parked outside. No one was inside the buildings at the time.

The Interior Ministry said a government compound was also hit as devout Muslims streamed to the area for early morning prayers. So, too, was a Cabinet building where the Hamas prime minister received the prime minister of Egypt on Friday.

In southern Gaza, Israeli aircraft went after the hundreds of underground tunnels militants used to smuggle in weapons and other contraband from Egypt, people in the area reported. A huge explosion in the area sent buildings shuddering in the Egyptian city of El-Arish, 30 miles (45 kilometers) away, an Associated Press correspondent there reported. The tunnels have also been a lifeline for residents of the area during the recent fighting, providing a conduit for food, fuel and other goods after supplies stopped coming in from Israel days before the military operation began.

More in Crisis in Gaza

Missiles also knocked out five electricity transformers, plunging more than 400,000 people into darkness, according to the Gaza electricity distribution company.

A separate airstrike leveled a mosque in central Gaza, damaging nearby houses, Gaza security officials and residents said. The military had no comment on that attack and it wasn't clear whether weapons or fighters were being harbored in the area.

One person was killed and three dozen people were wounded in the various attacks, Gaza health official Ashraf al-Kidra said. In all, 30 Palestinians and three Israelis have been killed since the Israeli operation began.

The Israeli military said it did not immediately have an accounting of its various overnight targets.

"The Palestinian government emphasizes its steadfastness and support for the Palestinian resistance," government spokesman Ihab Hussein said in a text message to reporters after the wave of Israeli attacks. "It stands alongside its people, who are subject to this aggression."

The widened scope of targets brings the two sides closer to the kind of all-out war they waged four years ago. Hamas, a group committed to Israel's destruction, was badly bruised during that confrontation, but has since restocked its arsenal with more and better weapons, and has been under pressure from smaller, more militant groups to prove its commitment to armed struggle against Israel.

The attack aimed at Jerusalem on Friday and strikes on the Tel Aviv area twice this week dramatically showcased the militants' new capabilities, including a locally made rocket that appears to have taken Israeli defense officials by surprise. Both areas had remained outside the gunmen's reach in past rounds of fighting, and their use dramatically escalated the hostilities.

Just a few years ago, Palestinian rockets were limited to crude devices manufactured in Gaza. But in recent years, Israeli officials say, Hamas and other armed groups have smuggled in sophisticated, longer-range rockets from Iran and Libya, which has been flush with weapons since Muammar Qaddafi was ousted last year.

The eerie wail of air raid sirens sounded in Jerusalem after the start of the Jewish Sabbath in the holy city, claimed by both Israel and the Palestinians as a capital and located about 75 kilometers (47 miles) from Gaza. Jerusalem residents were shocked to find themselves suddenly threatened by rocket fire, which, for more than a decade, had been limited to steadily broadening sections of southern Israel.

The attack on the contested city was especially audacious, both for its symbolism and its distance from Gaza. Located roughly 50 miles (80 kilometers) from the Gaza border, Jerusalem had been considered beyond the range of Gaza rockets -- and an unlikely target because it is home to the Al-Aqsa Mosque compound, Islam's third-holiest shrine.

CBS News correspondent Allen Pizzey and his team -- along with other news crews -- were forced by the Israeli military to move away from the border of the Gaza Strip on Friday morning, another signal pointing to a possible ground incursion into the tiny Palestinian territory.

Pizzey reported that as dawn broke in the Israeli town of Sderot, on the Gaza border, the extent of the force massed along the frontier made it clear Israel was preparing for a ground fight -- 16,000 Israeli reservists were called up on Thursday. The last invasion was four years ago, and analysts say Hamas will be better prepared this time.

In Israel, Pizzey reported, a funeral Friday was interrupted by a warning siren that another missile was on its way. There is a growing fear that Hamas has vastly improved its arsenal.

Most of the militants' rockets do not have guided systems, limiting their accuracy, though Israeli officials believe the militants may have a small number of guided missiles that have not yet been used.

Israeli police spokesman Micky Rosenfeld said the rocket landed in an open area southeast of the city -- near the Palestinian city of Bethlehem and just a few miles from Al-Aqsa.

"We are sending a short and simple message: There is no security for any Zionist on any single inch of Palestine and we plan more surprises," said Abu Obeida, a spokesman for Hamas' armed wing.

"Every time that Hamas fires there will be a more and more severe response," he told Channel 2 TV on Friday. "I really recommend all the Hamas leadership in Gaza not to try us again. ... Nobody is immune there, not Haniyeh and not anybody else."

Israeli Prime Minister Benjamin Netanyahu huddled with his emergency Cabinet on Friday night. Israeli media reported the meeting approved a request from Defense Minister Ehud Barak to draft 75,000 reservists. Earlier this week, the government approved a separate call-up of as many as 30,000 soldiers. Combined, it would be the biggest call-up of reserves in a decade.

Lt. Col. Avital Leibovich, a military spokeswoman, said 16,000 reservists were called to duty on Friday and others could soon follow.

She said no decision had been made on a ground offensive but all options are on the table. Dozens of armored vehicles have been moved to Israel's border with Gaza since fighting intensified Wednesday.

The violence has widened the instability gripping the region, straining already frayed Israel-Egypt relations. The Islamist government in Cairo, linked like Hamas to the region-wide Muslim Brotherhood, recalled its ambassador in protest and dispatched Prime Minister Hesham Kandil to the territory on Friday to show solidarity.

Kandil called for an end to the offensive while touring Gaza City's Shifa Hospital with Haniyeh, the Gaza prime minister who was making his first public appearance since the fighting began.

In one chaotic moment, a man rushed toward the two leaders, shouting as he held up the body of a 4-year-old boy. The two prime ministers cradled the lifeless boy who Hamas said was killed in an Israeli airstrike. Israel vociferously denied the claim, saying it had not operated in the area.

Fighting to hold back tears, Kandil told reporters the Israeli operation must end.

"What I saw today in the hospital, the wounded and the martyrs, the boy ... whose blood is still on my hands and clothes, is something that we cannot keep silent about," he said.

Pizzey reported that Kandil said he had come to plea for peace, but his rhetoric supported Hamas. He called the violence "a tragedy,"and said Egypt will "not spare any effort"to stop what he termed "this aggression".