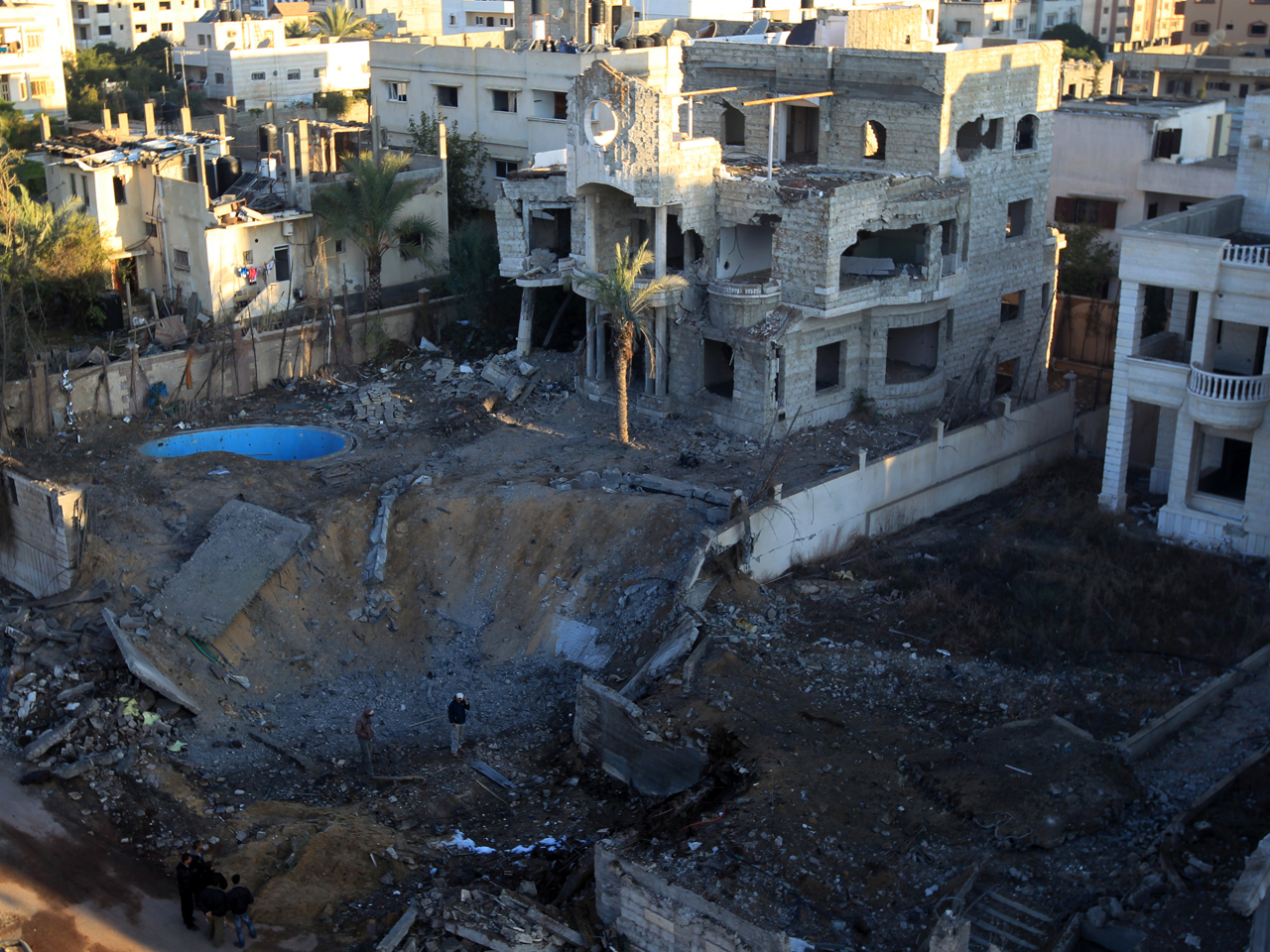 GAZA CITY, Gaza strip Israeli aircraft, tanks and naval gunboats pounded the Hamas-ruled Gaza strip on Thursday and rocket salvoes thudded into southern Israel, as terrified residents on both sides of the frontier holed up at home in anticipation of heavy fighting on the second day of Israel's offensive against Islamic militants.

The operation, launched in response to days of rocket fire from the Palestinian territory, kicked off with the assassination of Hamas' top military commander and deepened the instability gripping the Mideast. Israel's already strained relations with Egypt's new Islamist government frayed even further as Egypt recalled its ambassador Wednesday in response to the Israeli military operation.

The Israeli army said a rocket reached the southern outskirts of Tel Aviv, by far the farthest strike by Gaza militants in two days of fighting. The military said the rocket landed in Rishon Lezion, a city just south of Tel Aviv located in heavily populated central Israel. No damage or injuries were reported.

Defense officials say Israel is prepared to launch a ground invasion into Gaza if necessary. And Prime Minister Benjamin Netanyahu said the army was prepared for a "significant widening" of its Gaza offensive.

"No government would tolerate a situation where nearly a fifth of its people live under a constant barrage of rockets and missile fire, and Israel will not tolerate this situation," he said. "This is why my government has instructed the Israeli Defense Forces to conduct surgical strikes against the terrorist infrastructure in Gaza. And this is why Israel will continue to take whatever action is necessary to defend our people."

CBS News correspondent Allen Pizzey, reporting from the southern Israeli border town of Sderot, said myriad appeals from around the world for both sides to halt the attacks went completely ignored, and there were mounting fears that the clashes could spiral out of control.

Israel's defenses include a network of interceptor missiles placed in various border locations, known as the Iron Dome. The system intercepted a number of missiles Thursday, but many more got through.

Defense Minister Ehud Barak visited one of the Iron Dome sites in Be'er Sheva Thursday morning and lauded the network, but warned Israelis, "the system does not provide 100 percent protection; there is no such thing as a perfect system."

Just days earlier, Israel was drawn into Syria's civil war for the first time, firing missiles into its northern neighbor for the first time in four decades after stray mortar fire landed in Israeli-occupied Syrian territory. There were reports by Arabic media Thursday morning that an Israeli soldier in the occupied Golan Heights was wounded by fire from the clashes between the warring Syrian factions across the border. That report could not immediately be confirmed.

Waves of airstrikes on more than 100 militant targets quickly followed the assassination of Hamas mastermind Ahmed Jabari. The air attacks continued steadily into the early hours Thursday, targeting the armed group's training facilities and rocket launchers in Israel's most intense attack on the territory since its full-scale war there four years ago.

According to Arabic media, a total of 13 Palestinians had been killed in at least 80 Israeli airstrikes this week. Five of those killed were said to have been Hamas militants, including Jabari. The death toll could not be independently confirmed.

Rocket fire into southern Israel, meanwhile, killed three people in an apartment building Thursday morning, Israeli police say. The casualties in the town of Kiryat Malachi were the first in Israel since it launched its operation on Wednesday.

Ten Palestinians, including two young children and seven militants, were killed on the operation's first day, and more than 93 were wounded. Early on Thursday, Israel targeted a motorcycle carrying a rocket squad, killing one militant and wounding two, a Palestinian health official said. The Israeli military had no immediate confirmation of this report.

Tank shells and naval gunfire backed up the air onslaught. Few in the territory's largest urban area, Gaza City, heeded the call for dawn prayers, and the only vehicles plying the streets were ambulances and media cars.

In Washington, the United States lined up behind Israel. "We support Israel's right to defend itself, and we encourage Israel to continue to take every effort to avoid civilian casualties," said State Department spokesman Mark Toner.

Mr. Obama spoke separately to Egyptian President Mohammed Morsi, given Egypt's central role in preserving regional security, the White House said. The two men agreed on the need to de-escalate the conflict as quickly as possible.

On Wednesday night, the U.N. Security Council met behind closed doors to consider an Egyptian request for an emergency meeting on Israel's military action in Gaza. The Palestinians asked the council to act to stop the operation.

Gaza schools have been ordered closed until the operation ends, and most of the territory's 1.6 million people were expected to hunker down close to home, venturing out only to buy food, fuel and other basic supplies. Hamas announced a state of emergency in Gaza, evacuating all its security buildings and deploying its troops away from their locations.

Dozens of rockets bombarded southern Israel after the operation began, the militants undeterred by the relentless air attacks. No serious casualties were reported as Israel declared a state of emergency in its south and instructed people to remain close to fortified areas.

School was canceled within a 25-mile radius of Gaza. People living in areas hugging the frontier were ordered to stay home from work, save for essential services, and shopping centers were shut down. Israeli police stepped up patrols around the country, fearing Hamas could retaliate with bombing attacks far from the reaches of Gaza.

Israel said the airstrikes Wednesday were the beginning of a broader operation against the Islamic militants. They also said a ground operation was a strong possibility in the coming days if Hamas didn't take steps to rein in the rocket fire.

The Israeli military says it has destroyed dozens of the militants' most potent rockets -- the Iranian-made Fajr, which is capable of striking Israel's Tel Aviv heartland -- as well as shorter-range rockets.

In all, the military estimates Hamas had 10,000 rockets and mortars in its arsenal before the military operation began.

In a nationwide address, Netanyahu said Israel could no longer stand repeated attacks on its southern towns. Days of rocket fire have heavily disrupted life for some 1 million people in the region, canceling school and forcing residents to remain indoors.

"If there is a need, the military is prepared to expand the operation. We will continue to do everything to protect our citizens," Netanyahu declared.

In a sign the operation might broaden, the military was cleared to call up special reserve units.

Israel and Hamas have largely observed an informal truce for the past four years.

But in recent weeks, the calm has unraveled in a bout of rocket attacks out of Gaza and retaliatory Israeli airstrikes. From Israel's perspective, Hamas escalated tit-for-tat fighting in recent days with a pair of attacks: an explosion in a tunnel along the Israeli border and a missile attack on an Israeli military jeep that seriously wounded four soldiers.

Israeli defense officials warned earlier this week that they were considering resuming their controversial practice of assassinating senior militants, and the deadly attack Wednesday on Jabari proved they were serious. Israel has refrained from such attacks, which have drawn international condemnations, since its January 2009 offensive in Gaza.

Hamas officials had brushed off the Israeli threats, and Jabari, contrary to form, was driving in broad daylight when his vehicle was hit.

The Hamas military chief had long topped Israel's most-wanted list, blamed for masterminding a string of deadly attacks that including a bold, cross-border kidnapping of an Israeli soldier in 2006. He also was believed to be a key player in Hamas' takeover of Gaza in 2007 from a rival Palestinian faction, the Western-backed Fatah movement.

The Israeli military released a black-and-white video of the airstrike, showing a sedan moving slowly along a road before going up in flames in an explosion so powerful that a large chunk of the vehicle flew high into the air.

Crowds of people and security personnel rushed to the scene of the strike, trying to put out the fire that had engulfed the car and left it a charred shell. Plumes of black smoke wafted into Gaza City's skies following other airstrikes. Ambulance sirens blared as people ran in panic in the streets and militants fired angrily into the air.

Outside the hospital where Jabari's body was taken, thousands of Gazans chanted "Retaliation!" and "We want you to hit Tel Aviv tonight!"

"I was sitting on my bed with my grandson when suddenly the wall collapsed on both of our heads," said Mahmoud Bana, a 62-year-old man who was slightly wounded along with his 11-year-old grandson. "We don't know what happened but we know it is going to be a few hard days ahead."

Hamas' military wing responded to the strike on Jabari by saying Israel "has opened the gates of hell," Reuters reports.

"We mourn our late leader who walked the path of jihad while he knew the end, either victory or martyrdom," Haniyeh said. "There is no fear among our people and our resistance, and we will face this vicious attack."

Advocates say targeted killings are an effective deterrent without the complications associated with a ground operation, chiefly civilian and Israeli troop casualties. Proponents argue they also prevent future attacks by removing their masterminds.

Critics say the killings invite retaliation by militants and encourage them to try to assassinate Israeli leaders. They complain that the strikes amount to extrajudicial killings.

During a wave of suicide bombings against Israel a decade ago, the country employed the tactic to eliminate the upper echelon of Hamas leadership.

The Israeli military also released footage of its strikes against weapons depots and rocket-launching grounds. Hamas denied that any of its weapons stores were hit.

Hamas accused Netanyahu of launching Wednesday's operation to win votes in the Jan. 22 parliamentary election. But major Israeli parties, including the dovish opposition, all lined up behind Netanyahu.

Still, the region has changed greatly over the past four years. Most critically for Israel, Egypt is now governed by Hamas' ideological counterpart, the Muslim Brotherhood.

Israel and Egypt signed a peace accord in 1979. Relations, never warm, have deteriorated since longtime Egyptian President Hosni Mubarak was ousted in a popular uprising last year. The assassination threatened to further damage those fraying ties.

On its official Facebook page, the Freedom and Justice Party, the Muslim Brotherhood's political arm, called Jabari's assassination a "crime that requires a quick Arab and international response to stem these massacres against the besieged Palestinian people in the Gaza strip."

It accused Israel of trying to "drag the region toward instability."