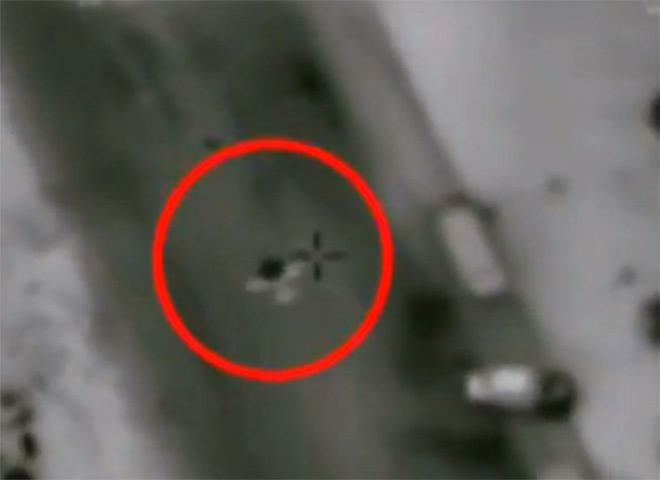 TEL AVIV An Israeli Defense Force spokesman said Friday that a Hamas militant program to build and launch drone aircraft has been destroyed.

Speaking on Israeli television, an IDF spokesman said that for the past few months Israel has been monitoring Hamas' attempt to build a drone fleet.

Black-and-white video released by the IDF shows a strike on a Hamas drone being tested at Khan Yunis in Gaza. In a Twitter message the IDF said the video shows "what that program once looked like."

Israel appeared to be preparing for an escalation of its military operation against Hamas militants in the Gaza Strip, with troops and armored vehicles gathering on the border, and a call to 16,000 Israeli reservists.

The latest moves come as Hamas-fired rockets were launched against Jerusalem for the first time, along with commercial hub Tel Aviv, showing off their expanded range.

CBS News correspondent Allen Pizzey and his team -- along with other news crews -- were forced by the Israeli military to move away from the border of the Gaza Strip on Friday morning, another signal pointing to a possible ground incursion into the tiny Palestinian territory.

Pizzey reports that as dawn broke in the Israeli town of Sderot, on the Gaza border, the extent of the force massed along the frontier made it clear Israel was preparing for a ground fight -- 16,000 Israeli reservists were called up on Thursday. The last invasion was four years ago, and analysts say Hamas will be better prepared this time.

Air raid sirens sounded in the two cities which -- unlike population centers in Israel's south -- had not been exposed to rocket fire from Hamas-ruled Gaza before the current round of cross-border fighting. No injuries were reported, but Hamas' latest attempts to hit Israel's heartland could push Israel closer to sending ground troops into Gaza.

Over the past three days, Israel has relentlessly pounded suspected rocket launching sites and other Hamas targets in Gaza with scores of airstrikes, while Hamas has fired more than 450 rockets toward Israel. The overall death toll rose to 30 -- 27 Palestinians and three Israelis.

In Israel, Pizzey reported, a funeral Friday was interrupted by a warning siren that another missile was on its way. There is a growing fear that Hamas has vastly improved its arsenal.

A Hamas spokesman Abu Obeida was quoted by news agencies as saying: "We are sending a short and simple message: There is no security for any Zionist on any single inch of Palestine and we plan more surprises." Hamas officials said the rocket was a homemade "M-75" rocket, a weapon that has never been fired before.

While no one was hurt when the missile fell just short of the ancient city (which is also home to hundreds of Palestinians, and the al-Aqsa mosque, the third holiest shrine in Islam), the attack told Israelis that Jerusalem - about 50 miles from the Gaza Strip - is no longer out of reach.

If indeed the missile was fired from Gaza, it demonstrated that Hamas' military wing has figured out how to extend the range of its missiles, perhaps by cutting down on the payload to add more fuel, said Pizzey.

Ban's spokesman Martin Nesirky said the secretary-general is "deeply worried by the rising cost in terms of civilian lives."

"A new cycle of bloodshed will make neither Israelis nor Palestinians more secure. Nor will bloodshed open the door to negotiations that could achieve the two-state solution necessary to end such violence permanently," the U.N. official said.

Former U.S. envoy to the Middle East George Mitchell told "CBS This Morning" the biggest danger to Israel in the current clashes was that they could draw in Hezbollah - a group backed by and present in Iran. Hezbollah has superior firepower to Hamas, and Mitchell says the group could hit almost anywhere inside Israel.

Three days of fierce fighting between Israel and Gaza militants has widened the instability gripping the region, straining already-frayed Israel-Egypt relations. The Cairo government recalled its ambassador in protest and sent its prime minister, Hesham Kandil, to Gaza in a show of solidarity with the Palestinian territory's militant Hamas rulers.

Prominent Brotherhood figures took part, many brandishing the checkered Palestinian scarf, or keffiyeh, during the marches.

Small anti-Israeli demonstrations occurred in east Jerusalem and the West Bank. Police dispersed the crowds with tear gas and stun grenades. And in Iran, a close Hamas ally, thousands of people took to the streets in the capital Tehran. The demonstrators carried banners denouncing Israel. They chanted "Death to the U.S." and "Death to Israel."

In Europe, reaction was mixed. Germany held Hamas responsible and urged Egypt to pressure the Islamists to halt the violence, while Britain cautioned Israel against launching a ground offensive.

"When Israel has entered into ground invasions in other conflicts that is when they have lost a good deal of international sympathy and support, and of course civilian casualties become much harder to avoid in that situation," Foreign Minister William Hague told reporters in London.

Earlier Friday, hopes for a three-hour ceasefire were dashed when Israel said its air force had bombed the house of a Hamas commander in the Gaza Strip after militants fired more than a dozen rockets toward southern Israel during a brief visit by Egypt's premier to the Palestinian territory.

The very brief pause in the fighting was shattered after a night of fierce exchanges and signals that Israel might be preparing to invade Gaza. Overnight, the military said it targeted about 150 of the sites Gaza gunmen use to fire rockets at Israel, as well as ammunition warehouses, bringing to 450 the number of sites struck since the operation began Wednesday.

Fighting between the two sides escalated sharply Thursday with a first-ever rocket attack from Gaza on the Tel Aviv area, menacing Israel's most densely populated area. Pizzey said at least two rockets hit in the Tel Aviv area on Thursday, but no casualties were reported. Three people died in the country's rocket-scarred south, however, when a projectile slammed into an apartment building earlier in the day.

Israel and Hamas had largely observed an informal truce since Israel's devastating incursion into Gaza four years ago, but rocket fire and Israeli airstrikes on militant operations continued sporadically. The latest flare-up exploded into major violence Wednesday when Israel assassinated Hamas' military chief, following up with a punishing air assault meant to cripple the militants' ability to terrorize Israel with rockets.