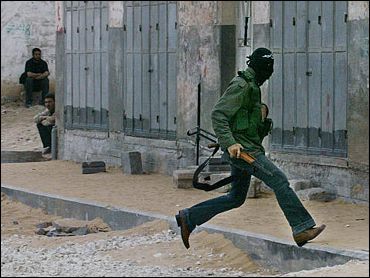 Palestinian militants proudly flaunted the body parts after Tuesday's battle, in which the soldiers were killed when their armored personnel carrier was blown up. At least nine Palestinians were reported dead in the ongoing fighting.

The Palestinian Authority, along with Egypt, urged Hamas and Islamic Jihad militants to return the remains. Some Palestinians are worried about their image, reports CBS News Correspondent Robert Berger: parading remains puts them in the same category as the Islamic militants who beheaded the American in Iraq.

Israel pledged a harsh reprisal, saying it would not negotiate with the militants and vowing to continue its operation until it recovers the bodies.

"We will definitely not tolerate this brutal abuse and disrespect of human life and the sanctity of bodies," said government spokesman Jonathan Peled.

After an overnight lull, the heavily armed Israeli forces, backed by tanks and combat helicopters, resumed searches early Wednesday. Gun battles erupted from time to time with Palestinian militants. Residents in the Zeitoun neighborhood — scene of Tuesday's explosion — were confined to their homes.

"We are searching every house, we are climbing onto every roof and balcony, to locate the remains of the bodies and the APC," Maj. Gen. Dan Harel told Israeli Army Radio. Top military commanders were in the area to personally supervise the search.

Soldiers stormed 45 shops and garages during the searches. Residents and schoolchildren gathered at the edge of the neighborhood — a Hamas stronghold — while gunmen streamed into the area, sparking gunfights with troops.

During the fighting, Israeli troops fired a helicopter missile at a building where the army said militants were planting bombs and firing missiles. Nine people were wounded in the airstrike, none of them seriously, Palestinian hospital officials said.

Minutes later, three explosions shook the neighborhood but there were no details on the cause of the explosions.

Less than two hours later, a second Israeli missile was fired in Zeitoun. Palestinian residents said it had targeted a group of people outside a mosque. Hospital workers said one person was killed and at least eight were wounded.

Eight Palestinians were killed in Tuesday's fighting, and soldiers killed a ninth person Wednesday who tried to fire an anti-tank missile at them, according to the army. Palestinian residents said a tenth person had been killed and buried under rubble. The report could not be independently confirmed. About 144 Palestinians have been wounded in the two days of fighting.

Saed Abdullah, a 45-year-old father of six who lives about 200 yards from the site of Tuesday's explosion, described the last 24 hours as a nightmare. He said he and his children spent hours hiding under beds as bullets penetrated the house, shattering windows and destroying furniture.

Soldiers stormed the house, locking the family into a room for more than five hours, Abdullah said. Then they took him and two other neighbors and used them as "human shields" as they searched the neighborhood, he added. Abdullah said he understands the need to collect the bodies.

Israel is known for going to great lengths to recover the remains of fallen soldiers, both because Jewish law requires the body to be buried intact and the army fears militants will try to use the remains as bargaining chips.

Israel has carried out a number of lopsided deals, most recently in January, exchanging hundreds of Arab prisoners for the remains of dead soldiers.

Tuesday's fighting began as a routine Israeli operation to uncover and destroy weapons workshops in Gaza City, but changed direction when the explosives-laden armored vehicle ran over an improvised bomb.

Masked Palestinian gunmen rushed to collect the body parts following the explosion, saying they would use the flesh to barter with Israel for the release of prisoners. Israel rejected the demand outright.

"We are not conducting any negotiations," said Israel's military chief, Lt. Gen. Moshe Yaalon. "We will show no forgiveness toward those who are responsible for (what happened to) the bodies," he said.

Hamas claimed responsibility for the roadside bomb. Two other militant groups, the Al Aqsa Martyrs' Brigades — linked to Palestinian leader Yasser Arafat's Fatah movement — and Islamic Jihad, also said they had some of the remains.

He said "there are contacts" with the militant groups, and that Palestinian leader Yasser Arafat had ordered his security forces to make every effort to collect the parts "without delays."

Jibril Rajoub, a top Palestinian security official, said Egypt had joined the effort to persuade the militants to release the remains. Egypt has often mediated talks between Palestinian groups and Israel.

The six soldiers' deaths — the most killed in a single army operation since November 2002 — renewed debate in Israel over Prime Minister Ariel Sharon's proposal to withdraw from Gaza. The area is home to 7,500 Jewish settlers and some 1.3 million Palestinians.

His "disengagement" plan was rejected by his Likud Party in a May 2 referendum.

Meanwhile, Palestinian Foreign Minister Nabil Shaath said President Bush has written to the Palestinian Authority, affirming his commitment to the "road map" peace plan and the creation of an independent Palestinian state.