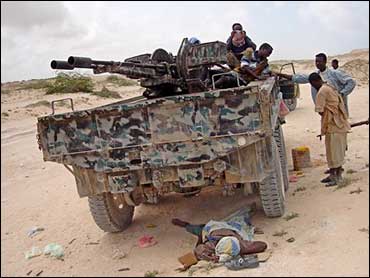 An Islamic militia with alleged links to al Qaeda seized Somalia's capital Monday after weeks of fighting with U.S.-backed secular warlords, raising fears that the nation could fall under the sway of Osama bin Laden's terrorist organization.

The advance unified the city for the first time in more than a decade and after 15 years of anarchy in this Horn of Africa nation. But it also posed a direct challenge to a fledging U.N.-backed Somali government.

"We won the fight against the enemy of Islam. Mogadishu is under control of its people," Sheik Sharif Sheik Ahmed, chairman of the Islamic Courts Union, said in a radio broadcast. The militia, which has formed an alliance that transcends clan, controls a 65-mile radius around the capital after fighting off a secular alliance of warlords.

The Islamic militia is gaining ground just as the U.N.-backed interim government struggles to assert control outside its base in Baidoa, 155 miles from Mogadishu. The prices of weapons soared there Monday as fears grew that the militia could head to Baidoa next.

The militia is the first group to consolidate control over all of Mogadishu's neighborhoods since the last government collapsed in 1991 and warlords took over, dividing this impoverished country of 8 million people into a patchwork of rival fiefdoms.

Omar Jamal, director of the Somali Justice Advocacy Center in St. Paul, Minn., said the Islamic militia's victory in Mogadishu was a turning point in the country's history.

"It is exactly the same thing that happened with the rise to power of the Taliban" in Afghanistan, he said, adding that the extremists are "using the people's weariness of violence, rape and civil war" to gain support for a government based on Islamic law.

The battle between the militia and the secular alliance has been intensifying in recent months, with more than 300 people killed and 1,700 wounded — many of them civilians caught in the crossfire of grenades, machine guns and mortars.

Alliance leaders could not be reached for comment Monday and had likely fled Mogadishu. One of them, warlord Mohamed Dheere, was believed to be in neighboring Ethiopia seeking reinforcements.

The United States is backing the secular alliance in an attempt to root out any al Qaeda members operating in the Horn of Africa. U.S. officials, speaking on condition of anonymity because of the sensitivity of the issue, have confirmed cooperating with the warlords. Abdullahi Yusuf Ahmed, president of Somalia's transitional national government, has said Washington is funding the alliance.

The Bush administration has not confirmed or denied backing the alliance, saying only that they support those who fight terror.

On Monday, State Department spokesman Sean McCormack said he could not offer any details about Monday's advance by the militia.

"We do have real concerns about the presence of foreign terrorists in Somalia, and that informs an important aspect of our policy with regard to Somalia," he said.

The United States has not carried out any direct action in Somalia since the deaths of 18 servicemen in a 1993 battle depicted in the film "Black Hawk Down."

The U.S. officials said recently that Islamic leaders in Mogadishu are sheltering three al Qaeda leaders indicted in the deadly 1998 U.S. Embassy bombings in Kenya and Tanzania. The same al Qaeda cell is believed responsible for the 2002 suicide bombing of an Israeli-owned hotel in Kenya that killed 15 people and a simultaneous attempt to shoot down an Israeli airliner over Kenya.

The Islamic militants and their secular rivals began competing for influence in earnest after a U.N.-backed interim government slowly began to gain international recognition. The government, weak and wracked by infighting, has not even been able to enter the capital because of the violence.

Interim Prime Minister Ali Mohamed Gedi recently fired four ministers who were part of the secular alliance, leaving the alliance without any support in the government.

"The victory of Islamic courts is a major step toward a lasting peaceful settlement in Mogadishu," said Somali economist Abdinasir Ahmed. "We are tired of the deception and rhetoric of the warlords."

Abdulqaadir Bashir, a computer engineer, disagreed. "The Islamic clerics want to be like Taliban regime in Afghanistan," he said. "People have no hope at all."

Jamal said it will take time for the militants to consolidate their power in Mogadishu, and that the struggle to control the country will not end there. He called on the international community to do everything possible to support the U.N.-backed government to keep the Islamic radicals from expanding their power base any farther.

"This war will not stop in Mogadishu," Jamal said.