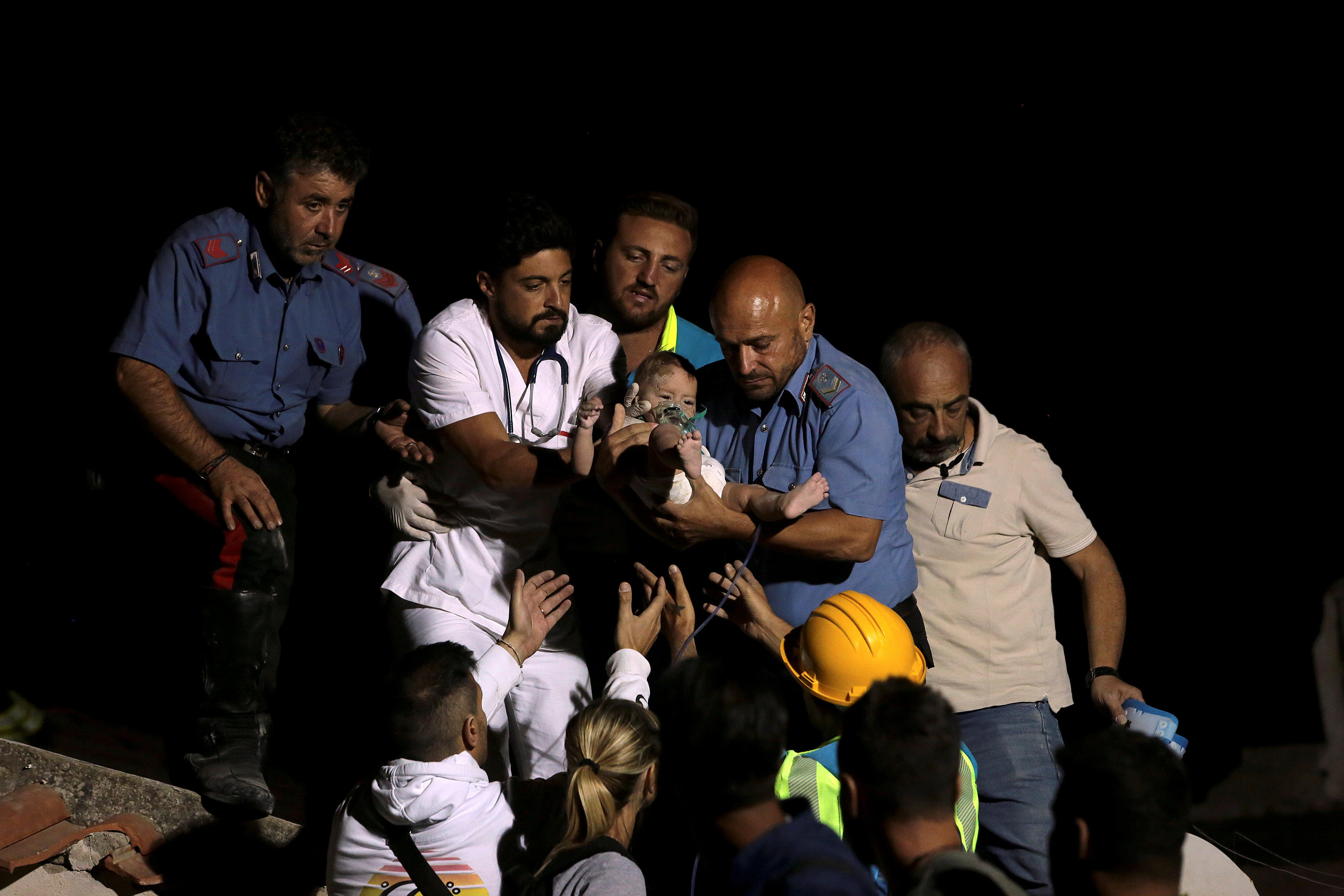 MILAN -- Italian firefighters said Tuesday that the last of three brothers had been pulled from rubble alive on the Italian resort island of Ischia, some 16 hours after a 4.0-magnitude quake toppled buildings and killed at least one person.

Firefighters dug with their bare hands to free Ciro, the eldest of the three boys at 11, about two hours after they freed his younger brother, Mattias, and eight hours after they removed 7-month-old brother Pasquale. Firefighters announced the final success with a tweet: "Even Ciro is saved!" TV cameras recorded cheers going up.

Pasquale, the infant, appeared alert on firefighter video as he was passed to safety. Both he and his 7-year-old brother Mattias were said to be in good condition in a local hospital after being rescued.

Firefighter spokesman Luca Cari described the work to free the boys as complicated. He said rescuers had maintained voice contact throughout with the children.

The father told RAI state television that the boys were in their bedroom when the quake struck, while he and his wife were elsewhere in the house. She managed to escape through a window while rescuers got first to the father.

Italian media cited an Italian police lieutenant on the scene as saying that Ciro had saved the life of his 7-year-old brother Mattias.

"After the tremor, he grabbed him and pushed him under the bed with him, a gesture that undoubtedly saved both of their lives. Then with a broom handle he beat against the rubble until the rescuers heard him," the officer said.

Italian news agency ANSA reported that Ciro had told his rescuers that, "when everything crumbled, I hugged my brother and then when the rescuers came, I pushed him out first."

One of the rescue workers said that Ciro had been buried under rubble about 12 feet deep.

The boys' father told Italian network RAI that "it was a horrible night, I don't have to words to describe it. I was in the kitchen, two children in their room, my wife was in the bathroom and she managed to escape through the window. The entire first floor of the building crumbled, and the firefighters pulled me out. They're exceptional."

Officials confirmed that an elderly woman who was inside a collapsed church was killed in the quake, which struck just before 9 p.m. (1900 GMT) just as many people were having dinner, on Monday. Another 39 people were injured.

The quake rattled the Italian resort island at the peak of tourist season. The hardest-hit area was Casamicciola, on the northern part of the island, where the three brothers became trapped with their family.

There was great discrepancy in the magnitude reported: Italy's national vulcanology agency put the initial magnitude at 3.6, though it later revised it to a 4.0 sustained magnitude. It put the epicenter in the waters just off the island and a depth of 3 miles. The U.S. Geological Survey and the European-Mediterranean Seismological Center gave it a 4.3 magnitude, with a depth of 6 miles.

While such discrepancies and revisions are common, Italian officials complained that the Italian agency's initial low 3.6-magnitude greatly underestimated the power of the temblor.

At least one hotel and parts of a hospital were evacuated. A doctor at the Rizzoli hospital, Roberto Allocca, told Sky TG24 that some 26 people were being treated for minor injuries at a makeshift emergency room set up on the hospital grounds. He said the situation was calm and under control.

Civil protection crews, already on the island in force to fight the forest fires that have been ravaging southern Italy, were checking the status of the buildings that suffered damage. Other rescue crews, as well as dogs trained to search for people under rubble, were arriving on ferries from the mainland.

Together with the nearby island of Capri, Ischia is a favorite island getaway for the European jet set, famed in particular for its thermal waters. Casamicciola was the epicenter of an 1883 earthquake that killed more than 2,000 people.

The quake came just two days shy of the one-year anniversary of a powerful 6.2-magnitude earthquake that devastated several towns in central Italy. That temblor last Aug. 24 killed more than 250 people in Amatrice and beyond and set off a months-long series of powerful aftershocks that emptied many towns and hamlets of their people.